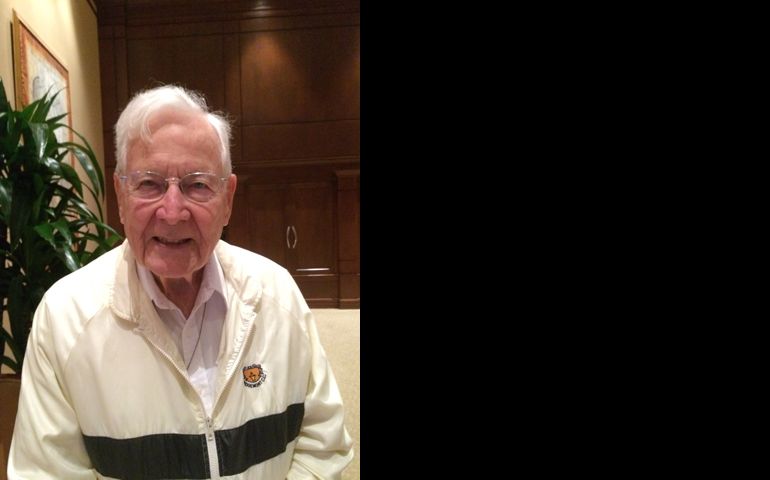 I ran into an Irish Christian brother, Thomas P. Draney, at a talk I gave Tuesday on Pope Francis. Draney for years has promoted the idea of Christians gathering in homes for lay-led liturgies based on the Last Supper. He lives in retirement in Naples, Fla.

We talked briefly about the centrality of the Eucharist in church. He says he does not advocate breaking with Catholic tradition, and he is not advocating disregarding church canons. He merely points out that lay Catholics can come together in their homes and share a meal, understanding that when they pray and break bread and share a chalice in the name of Jesus, they are, in fact, celebrating Eucharist.

Draney has a website, and on that site, he answers the question: Why are such meals necessary today?

"Our culture has become one of supremacy of the individual," he writes. "The family dinner has taken second place to all kinds of other commitments: school, athletics, business meetings, scouts, community service, etc. The marvels of electronics have made all kinds of communication possible, but none of it is truly personal, face-to-face, where you know someone is really listening.

"The secularization of society resulting from separation of church and state has resulted in religion and spirituality being topics that are not acceptable in most settings. The need is great, and the greatest proof is the response elicited when the permission is granted and someone begins the conversation."

He goes on: "Let me be clear from the beginning. I do not advocate a diminishment of the Eucharist as a sacrifice, something to replace the parish Mass, nor an abandonment of an ordained clergy. I see the returning to the practice of a Eucharistic meal by small groups within a parish as something, which will strengthen the parish in the long run. This is not New Age. It is returning to the roots. In the gospels and Acts, the house churches of Mary (mother of Mark), Lydia, Prisca and Aquila, Nympha, and of Philemon and Apphia are recorded."

"At the meal, all are free to talk about their life with God," he writes. "We are invited to share how or when they have experienced God or the absence of God during the past week or so, and yet no one is pressured to share. It is the kind of opportunity, which builds real friendship, community, and in the long run strengthens a parish."

"At the end of the meal the chalice of wine is consecrated in the same fashion, with the chalice being passed around the table, affording everyone the opportunity of partake of it. In the chaburah meal, this final cup of wine was seen as a toast and a pledge of the group assembled to remain faithful to what had drawn them together. For the first disciples of Christ, it was a pledge to remain 'people of the way.' For us it is a pledge to remain committed to the vision of Vatican II and to each other as we struggle to renew our church."