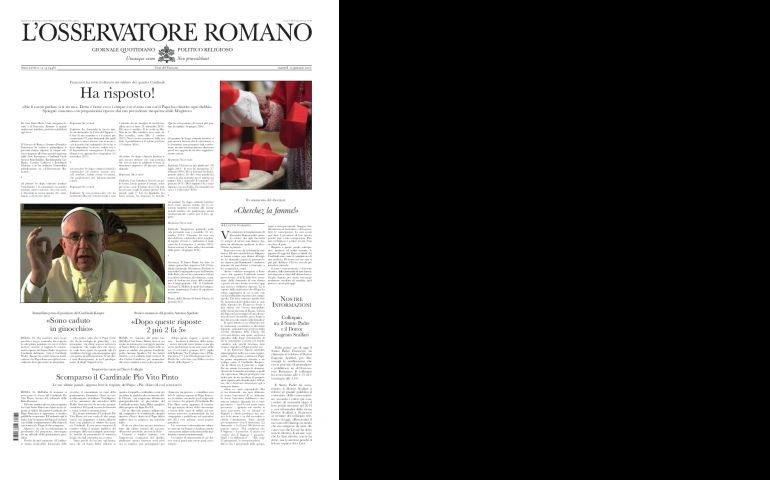 The fake edition of L'Osservatore Romano

Rome — A fake edition of the Vatican's semi-official newspaper L'Osservatore Romano made the rounds in Rome Friday, declaring in a bolded headline that Pope Francis had (subtext: finally) responded to four cardinals who challenged him last fall with five yes or no questions about how he understands church teaching.

"He responded!" the fake paper exclaims under what looks like an exact copy of L'Osservatore's masthead. "Francis has broken his silence on the dubia of the four cardinals."

And the supposed answer to each question? "Sic et non." (Latin for "Yes and no.")

While the very Italian version of fake news appears to have been created in a mean spirit -- the story below the pope's response reports that German Cardinal Walter Kasper fell on his knees upon hearing the news --it may just end up making the pope's point: life is more complicated than yes or no answers.

In their letter to Francis last year, the cardinals -- Italian Carlo Caffarra, American Raymond Burke, German Walter Brandmüller, and Polish Joachim Meisner -- challenged the pope over his apostolic exhortation on family life, Amoris Laetitia ("The Joy of the Family").

In one question, the prelates asked if divorced and remarried people could now take communion. After giving his squirrelly yes/no response in the fake paper, the supposed pope explains himself by repeating a real talk he gave to Rome's Evangelical Lutheran church in 2015.

"I ask myself: Is sharing the Lord’s Supper the end of a path or is it the viaticum for walking together?" the pontiff repeats from that talk, using a Latin term for food or provisions along the journey. "From there, grab hold of the consequences."

In another question, the cardinals had asked if the church still teaches that people who are committing adultery are in an objective state of mortal sin. In his answer to that one, the imagined pontiff points to a real June 2016 talk he gave to the priests of the diocese of Rome.

Referencing the Gospel story of the women accused of adultery that Jesus refuses to condemn, Francis repeats: "With the adulteress, Jesus played a bit dumb, he lets some time pass, writes on the ground. And then he says: 'Let the first of you who is without sin throw the first stone.'"

The four cardinals' challenge to Francis stirred up a lot of attention when it was made public last November.

Msgr. Pio Vito Pinto, the dean of one of the Vatican's highest courts, was even reported saying that month that earlier popes might have asked cardinals to resign for making such a move.

After reading Francis' response "with visible satisfaction," the paper reports Pinto exclaimed "Clearer than this and you'd die!" before simply vanishing into thin air.

Strangers in the night

Cardinal Marx says loyalty to the pope is important for Catholicism

US bishops are quiet on climate change