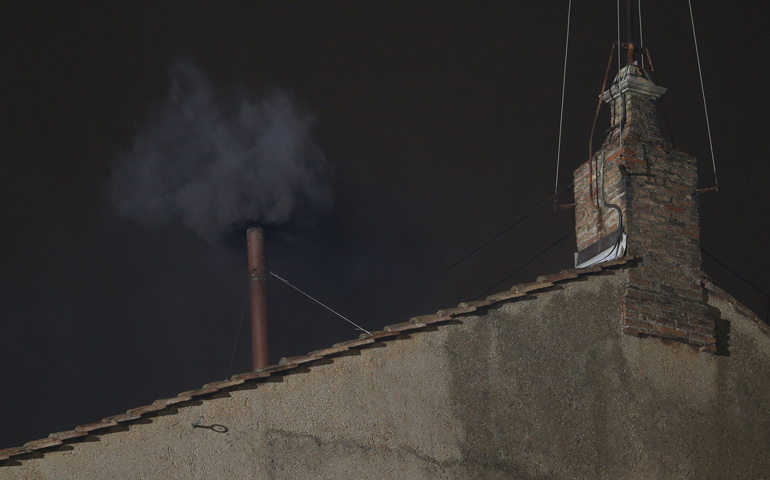 Black smoke billows from the chimney of the Sistine Chapel, the sign that cardinals did not elect a pope in their first round of balloting March 12 at the Vatican. (CNS/Paul Haring)

Black smoke billowed Tuesday night from a temporary chimney atop the Sistine Chapel, indicating the cardinal electors cast their first ballots for a new leader of the 1.2 billion-member Roman Catholic church but no pontiff was elected.

People had gathered in St. Peter's Square in drizzling rain throughout the evening, keeping their eyes trained on two screens showing video feed of the chimney. By about 7:45 p.m. local time, well after dusk, solid black smoke puffed out, leaving little room for interpretation.

Black smoke on the first evening of the conclave was expected. There are 115 cardinals of the church voting for the new pope, who can only be elected once he receives votes from 77 cardinals, or two-thirds of those voting.

Following Tuesday's vote, the cardinals will be ushered to a special Vatican hotel, where they will be unable to communicate with the outside world.

The hotel, Domus Sanctae Marthae, has been prepared with electronic jamming devices, and each of the cardinals has taken a vow of secrecy for the duration of the conclave.

Next on the agenda for the prelates is dinner together in the hotel's dining room, where they're expected to openly discuss the outcome of the ballot, beginning the serious, if subtle, hashing through of who among them has the most support.

Going into the conclave, it was expected the first round of balloting might produce a small number of front-runners and subsequent ballots would determine if any could garner substantial support.

The conclave continues through the week with two rounds of balloting each morning and night, until the cardinals find consensus. If no candidate is elected by the end of Friday, the cardinals are forced by church law to pause for a day of prayer and reflection.

After the death of Pope John Paul II in 2005, the cardinals gathered in conclave to elect his successor found consensus on the fourth round of balloting, or the third ballot of the second day of voting, when they elected then-Cardinal Joseph Ratzinger as Pope Benedict XVI.

Early speculation for this conclave has centered on whether there is any candidate this time who could likewise emerge successful on the second day of voting, Wednesday, appearing on a balcony of St. Peter's Basilica as the new bishop of Rome and supreme pontiff of the Roman Catholic church.

Before the voting Tuesday, the cardinals celebrated a special Mass for the election of a new pope in the basilica.

Cardinal Angelo Sodano, an 85-year-old Italian who is unable to vote in the conclave because of his age, gave the homily at the Mass, a feverino on the church's social teachings.

Early Tuesday evening, the cardinals made a solemn procession into the Sistine Chapel, where they are voting, and took oaths on the Gospel not to discuss the events. Broadcast live for the first time by Vatican television, the cardinals in the procession wore their scarlet choir dress and sang the "Veni Creator Spiritus."

Msgr. Guido Marini, master of papal liturgical ceremonies, then announced in Latin, "Extra omnes," ordering out of the Sistine Chapel everyone not authorized to remain.

While no conclave since 1922 has lasted longer than four days, Chicago Cardinal Francis George said Monday this conclave might last through Friday or even into Sunday.

Colleen Dolan, director of communications and public relations for the Chicago archdiocese, said Tuesday that George had told her the day before he thought "it was possible" the conclave could go for several days, even into the mandatory break for a day of prayer Saturday.

Discussions among the cardinals in 10 meetings held over the past week before entering the conclave reportedly focused extensively on the church's central governance and the group of bureaucrats who run the shop, known collectively as the Roman Curia.

Reports have said one common theme among the discussions was a determination among the cardinals to find a candidate who could shepherd reforms of the Curia. Other traits cardinals are said to be looking for are global vision and an ability to communicate.

If there's no sign of white smoke after four votes Wednesday, some have speculated it could be a sign that none of the leading candidates have established a significant base of support and the cardinals might be evaluating at least a few different candidates.