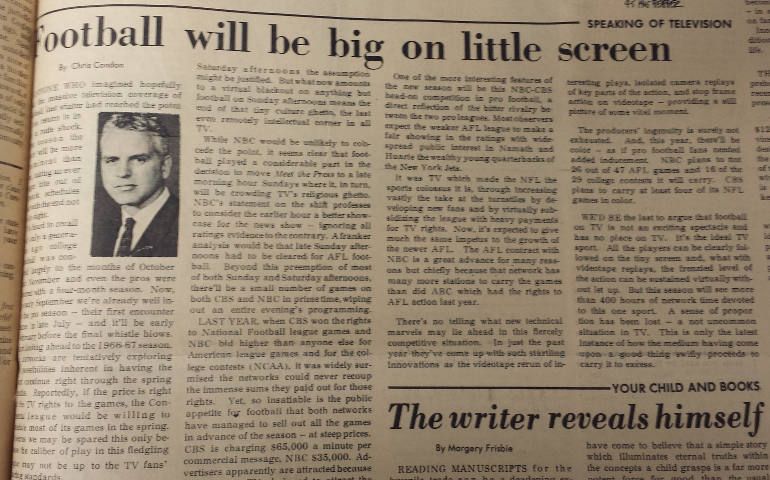 You never know what may pop up when you’re exploring the NCR archives.

During a recent trip into the bounded issues of publications past, a headline for one of regular columnist’s Chris Condon’s “Speaking of Television” pieces from Sept. 8, 1965, Lambeau-Leaped from the pages, in lieu of an upcoming sports event:

“Football will be big on little screen.”

With the Super Bowl in just three days, what better time to explore an early NCR perspective on America’s most popular sport -- though not its national pastime -- before its signature game.

But first, some context.

By 1965, professional football had been on the TV airwaves for 26 years, with NBC broadcasting the first game in October 1939 (shown locally in New York, about 500 viewers tuned in to watch). The first college game hit the tubes a month earlier (featuring Jesuit-run Fordham University), so by the time Condon penned his column, football was well established on TV.

Still, as he discusses, new developments were on the way, and its growth was not necessarily welcome by all:

“Anyone who imagined hopefully that the massive television coverage of football last winter had reached the point of no return is in for a rude shock,” Condon wrote in that September 1965 column. “This season the sport will be more prominent than ever, taking an ever larger bite out of the network schedules and with the end not yet in sight.”

He lamented how the pro schedules of the National Football League and American Football League begun in early September and would stretch into early February. A third league, the Continental League, was rumored willing to move its games into the spring, further enhancing football’s TV footprint.

For Condon, the extensive coverage was no small matter, particularly for what it pushed aside.

“What now amounts to a virtual blackout on anything but football on Sunday afternoons means the end of that tiny culture ghetto, the last even remotely intellectual corner in all TV,” he said.

“While NBC would be unlikely to concede the point, it seems clear that football played a considerable part in the decision to move Meet the Press to a late morning hour Sundays where it, in turn, will be crowding TV’s religious ghetto,” he said, not buying the network’s rationale that the earlier time provided “a better showcase for a news show”; instead, Condon saw it as a way to clear airspace for football.

Condon went on to highlight the immense amounts of money attached to football and its TV rights and advertising contracts. At the time, he wrote, “it was widely surmised the networks could never recoup the immense sums they paid for those rights.

“Yet, so insatiable is the public appetite for football that both networks have managed to sell out all the games in advance of the season – at steep prices,” he said.

Calling football “the ideal TV sport,” Condon noted that broadcasts had added video replay and were set to expand their coverage in color. Amid all the advancements, he expressed concern.

“We’d be the last to argue that football on TV is not an exciting spectacle and has no place on TV. It’s the ideal TV sport. All the players can be clearly followed on the tiny screen and, what with videotape replays, the frenzied level of the action can be sustained virtually without let up. But this season will see more than 4000 hours of network time devoted to this one sport. A sense of proportion has been lost – a not uncommon situation in TV. This is only the latest instance of how the medium having come upon a good thing swiftly proceeds to carry it to excess.”

Today, as many as 10 networks devote considerable chunks of their broadcasting to football, not to mention the countless pages of online videos and content.

Tom Brady's retirement reminds of milestones in our own lives