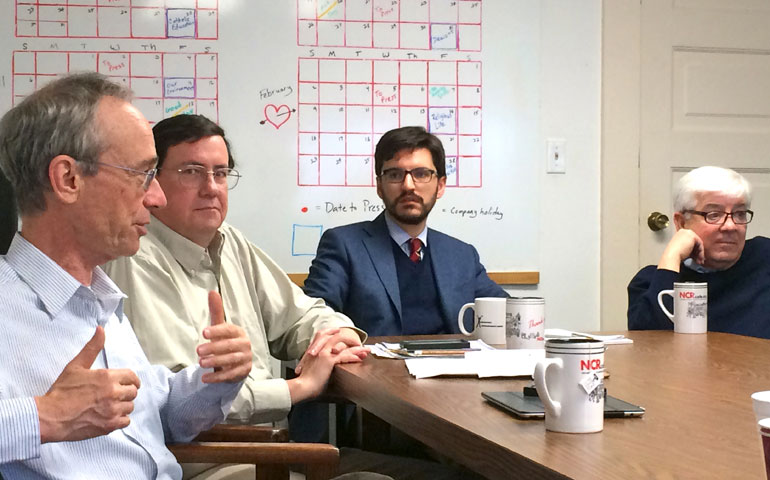 I have to remind myself that I first met Jesuit Fr. Tom Reese just last year. I mean, I had talked to him countless times over the years -- his name is ubiquitous as a source for journalists trying to understand this crazy organization we call the church -- and I had read his books and articles. But the first time I was in the same room with him to shake his hand and offer him a cup of tea was in late February 2013.

Pope Benedict XVI had resigned, and Josh McElwee, John Allen and I were in Rome covering that historical event. Cardinals from around the world -- with a few thousand journalists on their heels -- were coming to the Eternal City, and we were feeling the pressure. Along with our own reporting, TV, radio and newspaper journalists who don't normally cover the Vatican came to us looking for insight and commentary. We wondered if we could add another member to the NCR team who could fill that invaluable role of church analyst for the voracious media. Reese immediately came to mind. A couple phone calls later, the arrangements had been made -- all he needed, Reese said, was a stack of business cards and a cell phone -- and Reese was on a plane for Rome as NCR's senior analyst.

The four of us would meet every morning in the lobby of the Columbus Hotel to catch up and plan the day's assignments. Reese inevitably had at least a half dozen media interviews scheduled. These media outlets kept coming back to him because they valued his knowledge and wit about how the Vatican functions (and sometimes how it doesn't). I lost track of the outlets that interviewed him; he was on all the major U.S. broadcast channels. He was a commentator for the BBC for Pope Francis' inauguration Mass. It was a great partnership for NCR, and I was sad to see it dissolve as we all left Rome and resumed business as usual.

That is why last summer we jumped at the chance to get Reese back on board with us when we learned that the Woodstock Theological Center at Georgetown University was being shut down. Reese had been a senior fellow at Woodstock from 1985 to 1998 and 2006 to 2013. In between, he was editor in chief for the Jesuit magazine America, a job he lost because of pressure from the Vatican.

We invited Reese to join us, but he had other offers. We think you, our readers, will be very grateful that in the end Reese decided NCR was the right outlet for his talents. He joined us full time Jan. 1. He will be writing a weekly column, "Faith and Justice," that will appear in the newspaper every month and online every week. Make sure you sign up for column alerts; we'll send you an email every time Reese's column is posted. He is also making daily contributions on our website as part of our group blog NCR Today.

A version of this story appeared in the Feb 14-27, 2014 print issue under the headline: Fr. Reese is back on board.