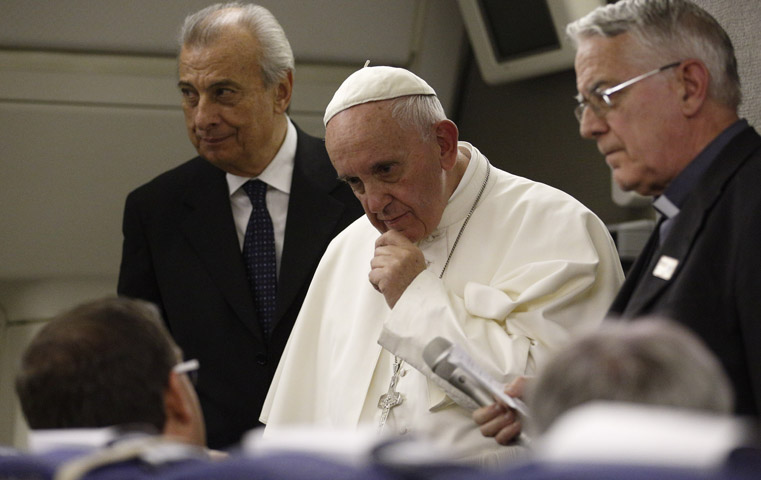 Pope Francis listens as he takes questions from journalists aboard his flight from Philadelphia to Rome Sept. 27. (CNS photo/Paul Haring)

Pope Francis has again forcefully rejected the possibility of female priests in the Catholic church, saying simply that his predecessor Pope John Paul II decided "that cannot be done."

In response to a question during a press conference on his flight back to Rome late Sunday/early Monday after an historic ten-day trip to Cuba and the U.S., Francis said that while women may "have the capacity" to be priests John Paul clearly made a negative decision in that regard.

"Not because women do not have the capacity," said Francis.

"But, look, in the church, women are more important than men because the church is woman; it is 'la' church, not 'il' church," he said, speaking in Italian and referring to the gendered article used before the Italian word for church.

"The Church is the bride of Jesus Christ," said the pope. "And the Madonna is more important than popes and bishops and priests."

"I must recognize we are a bit late in an elaboration of the theology of women," he continued. "We have to move ahead with that theology. Yes, that’s true."

Francis' answer on the papal plane is the latest in a series of somewhat controversial and frequently unclear remarks he has made about the role of women in the church.

The pope has previously said that the door to ordination for women was "closed" and has spoken of needing to develop a special theology of women.

But he has also said he has stayed away from appointing women to high-level positions in the Vatican bureaucracy for fear of promoting some sort of "functionalism" of women's roles.

One recent book of 43 essays by Catholic women said the pope's call for a theology of women "reduce[s] women to objects of study, a separate category of reflection."

"We resist ... any suggestion that the Church needs a theology of 'Woman' or 'womanhood,'" wrote the authors of Catholic Women Speak: Bringing Our Gifts to the Table.

In making the argument against women in Vatican roles during a trip to Turin, Italy in June, the pontiff also indicated an equality in ministry between men and women in the church, saying that all women have the "same work" the Virgin Mary had in receiving the Holy Spirit along with the twelve apostles at Pentecost.

The pope's mixture of apparently wanting to promote women's voices and roles while not giving women opportunity to take part in the church's governance structures strikes many as hard to understand.

In an interesting contrast, just before answering the question on women's ordination on the plane the pope very generously praised the work of U.S. Catholic women religious.

"An important person of the government of the United States told me in the last few days: 'The education I have, I owe above all to the sisters,'" the pope said. "The sisters have schools in all neighborhoods, rich and poor. They work with the poor and in the hospitals."