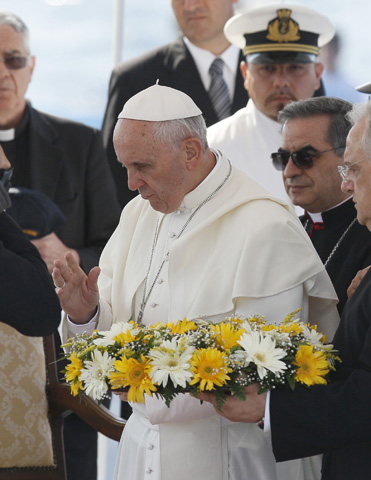 Pope Francis blesses a wreath Monday before tossing it into the Mediterranean Sea off the coast of Lampedusa, Italy. (CNS/Paul Haring)

At a time when Catholic leaders in the United States and other parts of the world are pressing for more compassionate immigration policies, Pope Francis on Monday devoted his first trip outside Rome to a strong appeal against the "globalization of indifference" toward suffering migrants.

The pope on Monday morning visited the southern Mediterranean island of Lampedusa, a major point of arrival for impoverished immigrants, mostly from Africa and the Middle East, seeking to reach Europe.

The pontiff tossed a wreath of yellow and white chrysanthemums into the sea to commemorate those who died making the passage, imploring host societies to ensure that the arrival of immigrants does not occasion "new and even heavier forms of slavery and humiliation."

Authorities estimate that as many as 20,000 migrants have died since the late 1990s attempting to cross the Mediterranean Sea by boat en route to Europe, with survivors generally ending up in detention centers in settings such as Lampedusa.

The pope insisted that with respect to such suffering, God asks everyone: "Where is your brother, the voice of whose blood reaches all the way to me?"

Approximately 10,000 people were on hand for a Mass celebrated by the pope on Lampedusa, including 50 recent immigrants currently housed at a center on the island in the front row.

Roughly an hour before the pope arrived Monday morning, the latest boatload of 165 migrants was met by a ship of the Italian Coast Guard and its occupants taken to a processing center on the island.

"Who is responsible for the blood of these brothers and sisters?" the pope asked, saying that too often, the answer is, "No one."

Francis extended a special greeting to the Muslims among the migrants, noting that the fast of Ramadan is beginning and wishing them "abundant spiritual fruits."

Amnesty International issued a statement shortly after the pope's visit, saying the gesture will "favor respect for the human rights of immigrants, of asylum seekers and refugees."

On the other hand, applause wasn't universal. Matteo Salvini, the No. 2 official with Italy's far-right Northern League party, posted a reply to the pope on his Facebook page.

"Helping them in their own home is the only just response," he said.

Francis began his remarks Monday by saying he read recently of a tragedy in which migrants died while trying to make a boat crossing, and the thought of it was "like a splinter in the heart that causes suffering."

"I felt the duty to come here today to pray, to perform a gesture of closeness, but also to awaken our consciences to that what happened doesn't repeat itself," he said.

Francis compared apathy in the face of the suffering of immigrants to the Gospel story of the Good Samaritan, in which a half-dead man lying in the street is ignored until the Samaritan finally stops to help.

"So many of us, and I include myself, are disoriented," the pope said. "We're no longer attentive to the world in which he live. We don't care about it; we don't take care of what God created for all; and we're no longer capable even of taking care of one another."

"When this disorientation takes on the dimensions of the world, it leads to tragedies such as what we've seen [here]," the pope said.