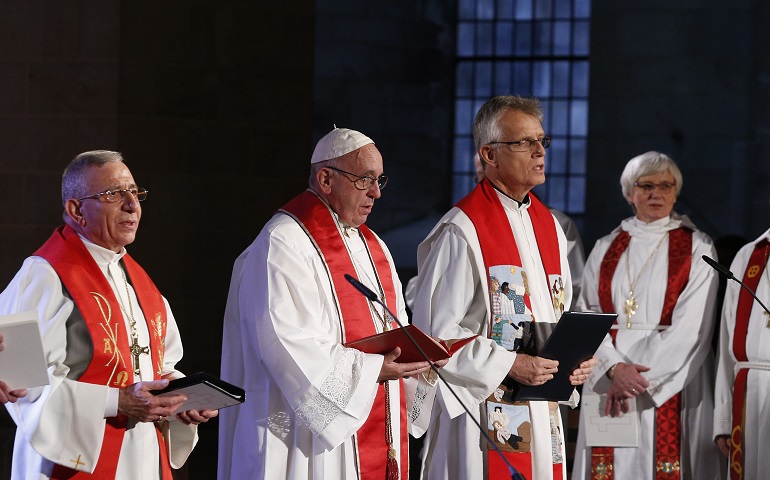 What a way to screw up a celebration of the Reformation! And prove that the Catholic church still needs one!

Pope Francis weighed in on the question of women priests ... suggesting that it will never happen. In so doing, he quoted his predecessor, Pope John Paul II, who was implacably opposed.

Francis had stirred some hope among people (like myself) who favor the ordination of women when he started that commission to study the question of women deacons. But alas! He has now fallen for the party line. Maybe he was always in that camp, but he never said so before.

Ironically, Francis had just finished a major celebration, kicking off the 500th anniversary of the Protestant Reformation, in Sweden. And he was embraced there by a woman who is the primate of the Church of Sweden, Archbishop Antje Jackelen.

That was what spurred a journalist's question about women priests on the pope's plane on the return flight to Rome. A Swedish reporter raised the issue. And Francis responded, "On the ordination of women in the Catholic church, the last word is clear."

He cited Ordinatio Sacerdotalis, written in 1994 by Pope John Paul II. That document said that ordaining women was not possible because Jesus chose only men as his apostles. That argument was dumb at the time, and it's still the butt of laughs. Just ask the late-night comedians who have used it.

So, I want to ask Francis: Don't you get it? That Reformation you celebrated is known for being open to change over time, over centuries — and that includes an openness to women pastors, priests, ministers, bishops and even archbishops.

So, it may be time for a feminist "95 Theses." It would be easy for someone to write up 95-plus reasons why it's discriminatory and downright silly and embarrassing to deny women an equal place in the church today. And such a document could easily explain why the church is much poorer because women are not equal. It could be nailed to the doors of the Vatican.

In short, all Francis' statement did was prove that the church still needs a Reformation!