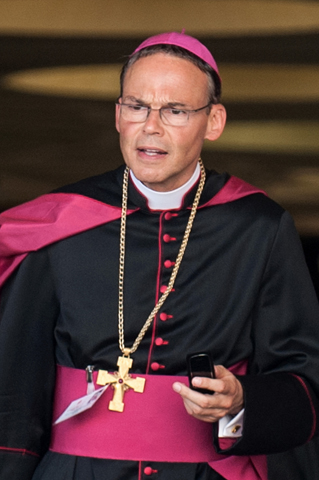 Pope Francis on Tuesday effectively fired a German bishop who had attracted controversy for extraordinary expenses on a new diocesan center, sending a signal that he is willing to oust bishops who do not align with his vision of a "poor church for the poor."

The Vatican announced Wednesday the pontiff had accepted the resignation of Bishop Franz-Peter Tebartz-van Elst, who had reportedly spent some 31 million euro ($43 million) on a new residence and complex in his Limburg diocese in western Germany while at the same time reducing salaries for staff in the name of financial austerity.

Francis had suspended Tebartz-van Elst from his role in October while the Vatican's Congregation for Bishops studied the matter. Wednesday's statement says the pope on Tuesday decided that the German diocese had "come to a situation that prevents a fruitful exercise of the ministry" of the bishop.

The statement said Tebartz-van Elst will receive another assignment in a "timely manner" and asks the German diocese to "accept the decisions of the Holy See with docility and wanting to commit to finding a climate of love and reconciliation."

Tuesday's move puts into the spotlight the extraordinary power of any pope to remake the global church as he sees fit. It also highlights anew differences of opinion among the highest prelates of the church, some of whom had defended Tebartz-van Elst.

The prefect of the Vatican Congregation for the Doctrine of the Faith, for example, had said in October that the accusations against the bishop were the "invention of journalists." The Vatican, said German Cardinal Gerhard Muller, supported the bishop "completely and fully." (The popular liturgy blog PrayTell first reported on the German-language report here.)

While Wednesday's release from the Vatican says Tebartz-van Elst resigned his office, the resignation was effectively at the pope's order.

The release says the pope accepted the resignation in accordance with church canon 401, which states that a bishop "who has become less able to fulfill his office because of ill health or some other grave cause" is "earnestly requested" to present his resignation to the pope.

Francis' move to fire Tebartz-van Elst was quickly criticized by survivors of clergy sexual abuse, who are asking the pontiff to make the same move against bishops who mishandle or cover-up clergy accused of abuse.

"When it comes to finances and governance, Francis moves quickly and boldly," read a statement from the U.S.-based Survivors Network of those Abused by Priests. "When it comes to children and crimes, Francis [moves] slowly and timidly."

Francis has been known for his frequent calls for the global Catholic church to stress simplicity, saying shortly after his election as pontiff he was seeking a "poor church for the poor." The secretary of one Vatican congregation, Archbishop José Rodríguez Carballo of the Congregation for Religious, even said earlier this month that "disciples must have nothing, not bread, not money in their bags."

Just before release of the Vatican statement Wednesday announcing Tebartz-van Elst's removal, Francis spoke for a lengthy period Wednesday morning during his weekly general audience on the sacrament of Holy Orders -- the Catholic sacrament where a man becomes a deacon, priest or bishop.