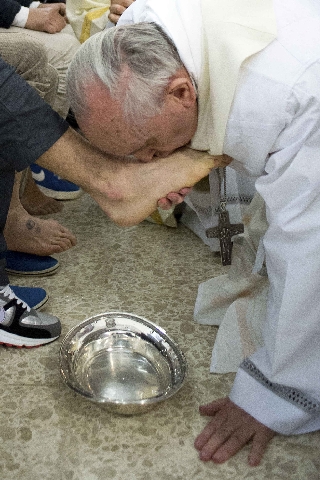 Pope Francis kisses the foot of a prison inmate during the Holy Thursday Mass of the Lord's Supper at Rome's Casal del Marmo prison for minors March 28. (CNS photo/L'Osservatore Romano via Reuters)

Pope Francis today kneeled before 12 juvenile detainees in a Rome detention center during a Holy Thursday ceremony. He washed, dried and kissed their feet. Two in the group were women, two were Muslims, according to the Vatican.

The symbolism of these gestures will certainly move quickly beyond the Catholic church.

While media outlets were not allowed inside the detention facility, Vatican Radio offered a live audio feed and the Vatican spokesman, Jesuit Fr. Federico Lombardi, briefed reporters afterward. He said the ritual was "extremely moving" because kneeling on both knees was very demanding for a 76-year-old pope.

The pope thanked everyone for their warm welcome and said he was happy to be with them. In words of encouragement, he told the young people "Press on! Don't let yourselves be robbed of hope. Understood?"

The pope greeted the residents with hugs and gave each of the young detainees a large chocolate egg and a traditional Italian Easter cake shaped like a dove.

The detainees, who range in age from 14 to 21, then gave the pope a wooden crucifix and kneeler they made in the detention center's woodshop.

[Thomas C. Fox is NCR publisher. He can be followed on Twitter @NCRTomFox]