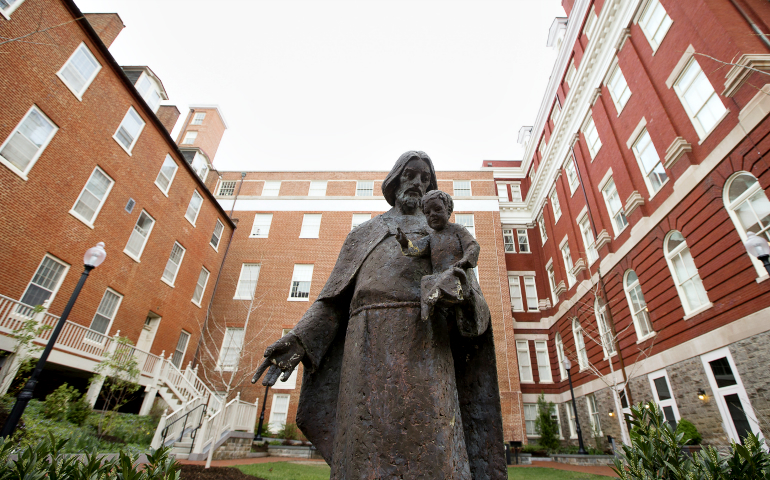 Mulledy Hall, center, seen on the campus of Georgetown University April 4, has been renamed after Isaac Hawkins, the first enslaved person listed in the Jesuit university's documents on its selling of slaves. (CNS/Tyler Orsburn)

In partnership with the Washington Archdiocese and the Jesuit Conference of Canada and the United States, Georgetown University held a public spiritual ceremony and building dedication April 18 to honor the 272 enslaved people that Jesuits in Maryland had sold to Louisiana plantation owners in 1838. The Maryland Province Jesuits had used the proceeds from that sale to pay off debts at Georgetown, the country's oldest Catholic university.

At least 100 descendants of the enslaved men and women attended the ceremony, titled "Liturgy of Remembrance, Contrition, and Hope." Jesuit Fr. Robert Hussey, provincial of the Maryland Province Jesuits, was also in attendance. Members of Georgetown's Catholic Music Ministry and the music ministry of St. Augustine Church performed in a joint choir at the ceremony.

Jesuit Fr. Timothy Kesicki, president of the Jesuit Conference of Canada and the United States, gave remarks on behalf of the U.S. Jesuits:

To think that together with those 272 souls we received the same sacraments, read from the same Scriptures, prayed the same prayers, sang the same hymns, and praised the same God — how did we, the Society of Jesus, fail to see us all as one body in Christ? We betrayed the very name of Jesus for whom our least society is named.

Now, nearly 200 years later, we know that we cannot heal from this tragic history alone. Many have confessed and labored to atone for this sin, mostly within the confines of our own religious houses and apostolic works. Because we are profoundly sorry, we stand now before God — and before you, the descendants of those whom we held enslaved — and we apologize for what we have done and for what we have failed to do.

After the ceremony, the university dedicated two campus buildings for Isaac Hawkins, the first enslaved person documented in the 1838 sale, and Sr. Anne Marie Becraft of the Oblate Sisters of Providence, a free black woman who established a school for black girls in Washington, D.C. According to Georgetown, Becraft's school was the first educational endeavor of its kind in the District of Columbia.

The buildings, formerly known as Mulledy Hall and McSherry Hall, were originally named for Thomas Mulledy and William McSherry, two Jesuits involved in the 1838 sale.

In his remarks, Kesicki quoted the late Benedictine Fr. Cyprian Davis, an African-American historian: "The tragic sin of Jesuit slaveholding reveals not only the harshness of slavery as it actually existed, but the moral quicksand of expedience and inhumanity that sooner or later trapped everyone involved in the ownership, buying and selling of human beings."

Georgetown also held events throughout the day to honor the descendants and reflect on the university's historical ties to slavery.

Georgetown said in a press release that April 18 was selected for the ceremony and building dedications to coincide with D.C. Emancipation Day, which honors the emancipation of slaves in the District of Columbia on April 16, 1862.