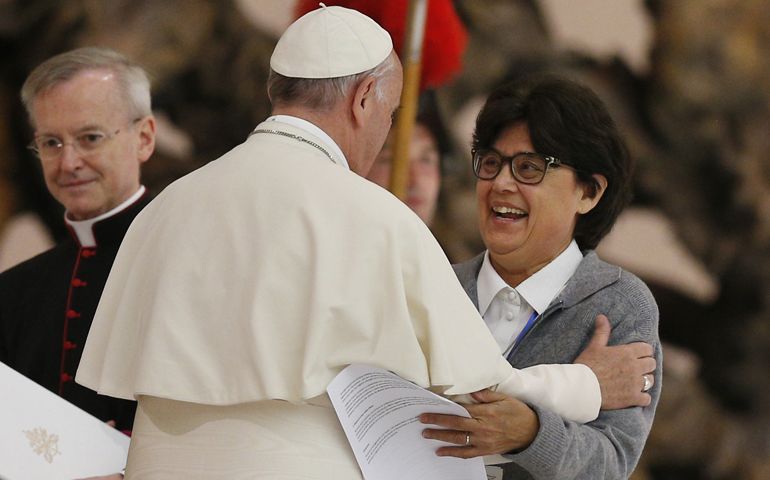 Rome — The main umbrella group of Catholic women religious around the world is expressing gratitude to Pope Francis for creating a commission to study the possibility of allowing women to serve as deacons in the church, thanking him for responding to their call for the creation of such a group.

The International Union of Superiors General (UISG) had asked the pontiff to create a commission to study women deacons in a meeting in May between him and some 900 of their members, each the head of a female religious order around the world.

Sr. Carmen Sammut, the president of the group, told NCR Wednesday that she wanted to thank the pope on its behalf.

"In the name of the International Union of Superiors General I would like to express my gratitude and appreciation to Pope Francis for having given this follow-up to our request in May," said Sammut.

"I understand this commission will provide the background information necessary for a discernment leading to a decision as to whether to open the diaconate to women in the Catholic church," she said.

"I noticed with joy that together with the chair person, the commission is made up of 6 men and 6 women scholars, lay and religious, coming from various parts of the world," Sammut continued. "I see this as one of the ways Pope Francis renders concrete his constant desire that women play a more incisive role in the church."

The Vatican said in a release announcing the commission Tuesday that the pope had decided to create the group “after intense prayer and mature reflection” and wanted it particularly to study the history of the female diaconate “in the earliest times of the church.”

The formal name given to the group is "Study Commission on the Women’s Diaconate." The commission's members include experts in patristic theology, ecclesiology, and spirituality.

During a question and answer session with the pontiff May 12, the UISG members told Francis that women had served as deacons in the early church and asked: "Why not construct an official commission that might study the question?"

"I am in agreement," the pontiff replied. "I will speak to do something like this."

The UISG was created at the end of the Second Vatican Council and now has about 1,880 members representing approximately 500,000 global women religious. Sammut, who has led the group since 2013, is Maltese and is also the general superior of the Missionary Sisters of Our Lady of Africa.

In an interview with Global Sisters Report following the May encounter with Francis, the UISG president earlier said she envisioned a future in which Catholic sisters could "go a step further" and be ordained as deacons.

"Very often in different parts of the world we are doing most of the work that needs to be done," Sammut said then.

"We are living very much in the periphery ... and priests are very rare in some of the places," she said. "There are services that we can give to the church, especially to the peripheral church where we are, which would be opened if we were women deacons."