Grief 101: suggestions for the loved ones of grieving parents 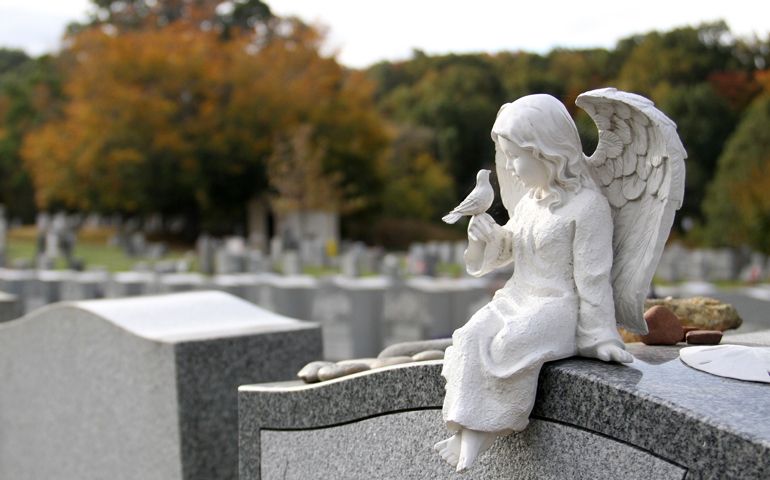 An angel figurine tops a headstone Oct. 24, 2015, at St. Peter's Cemetery in the Staten Island borough of New York. (CNS/Gregory A. Shemitz)

Last month, a 27-year-old friend of mine named John died. Like other cataclysmic events — earthquakes or tsunamis or meteor strikes — there was no hint whatsoever that this was coming. No illness. No injury. No symptoms of any kind. Nothing.

It was a normal day, a normal night. John completed his shift bagging groceries at our local Safeway grocery store, where he had worked part-time for seven years. His folks picked him up from work, he had dinner with his Mom — pizza and tater tots, his favorite — then John snuck a half of a can of soda and went downstairs to watch TV. A while later, when his Dad went down to retrieve some groceries from the car, and check on him, John was dead.

The coroner told John's family that John died from arrhythmia, caused by an enlarged heart, caused by an until-then undetected bad heart valve.

John also happened to have autism. He exhibited many similar behaviors to our son, Nick — who is six months older — including rocking back and forth on the balls of his feet, pacing, moaning and humming, and flapping his hands when he was excited or agitated.

Our family has known John for more than a decade. He and Nick both went through special education and life skills classes here in Anacortes, Wash. (John graduated a year ahead of Nick), and they participated side-by-side on our Special Olympics bowling team. John also sang in the high school chorus with our youngest son, Duncan.

I can easily picture John, tall in his tux in the back row of chorus men, bipping and bopping to his own internal tempo. He may not have been entirely in sync with the rest of the singers, but he thoroughly enjoyed the music, and we thoroughly enjoyed him.

To say that John's sudden death was a shock is a gross understatement. To his family. To his friends. To our whole town. This will be a turning point in all of our shared history. Before John died. After John died.

The morning of his funeral, I woke earlier than usual. Birds had not yet begun to chirp the sun into rising. Doves had not yet raised their heads from their warm nests to signal another day, huh-hoo, huh-hoo. Porch lights were still on, and kitchen lights were still off. No cars sped by on the highway. No boat engines purred in the harbor. All was still and black and breathless.

And I lay there, my chest feeling crushed and my eyes brimming with hot tears, remembering how it felt the day I buried my twin sons. I remembered when I had to remind myself to breathe. To sit up, then stand up, then brush my teeth, and put on clothes and eat something, going through the motions, pretending to be alive.

I found myself praying that John's Dad and Mom will be able to endure the things well-meaning people said to me: "It is God's will." "He is in a better place." "You will get over this, someday."

And, of course, people will say those things. They don't know what else to say.

I find myself wanting to hand out a 3x5 index card to each person as they enter the church this evening.

The front of the card will read: Grief 101. The flip side will have these suggestions:

Of course, this is the short list, the highlights that fit on the back of those index cards. The number of things that people allow to come out of their mouths in the name of comforting others is endless. It is not their fault, of course. Most people have not buried a child or children. They simply have no idea what to say or do to make it all better.

Because the simple truth is that it will never be "all better." When your child dies, so do you. You may look like you are still alive, but that is like a lizard's tail twitching after it is yanked off by a little boy. What looks like life is actually a reflex, a defense mechanism.

After everyone has gone home, gotten back to their busy lives, continued on, the really hard part starts. It is inconceivable to a parent that time actually continues past the moment their child ceased to be. It simply doesn't compute.

Because your life ended that moment. Your world stopped spinning. Your purpose, the daily details of your caring, your fierce protectiveness and anger and frustration and impatience and worry and passion and love all keep seeping up and out, dripping uselessly into the void where your child used to be.

This part takes great faith. But it also takes something really basic, maybe in a unique way for us parents of people who have special needs. What it takes to survive is one question, and one answer.

The question is: If I lose every single person I love, everyone I take care of, and there is only me left, all alone, am I worth staying alive for?

The answer? Well, that is different for each of us, I guess.

For myself, it took me nearly a year of many dark nights of the soul in which I railed against God and howled at the emptiness. When I was worn down to an exhausted nub, when there were only a few drops left in the depths of my existence, my answer finally came.

What I found in the shallows of my soul was the understanding that I am not accidental. That I am a child of God, and I was created for some reason, even if I couldn't possibly fathom what that was. My answer to the question was, surprisingly, yes.

And so I lived. And breathed. And about nine months after that, had another baby boy, and found joy again. Laughed again. Hoped again.

What I hope for today is this: that in the coming months, as these two extraordinary parents cope with the loss of this remarkable young man, they will remember that they are not alone, they will see John again, they are not accidental, and that their ultimate answers to that question are, respectively, yes.

People | Grief 101: suggestions for the loved ones of grieving parents