'Heaven is for Real' is a compelling story, not a canned sermon 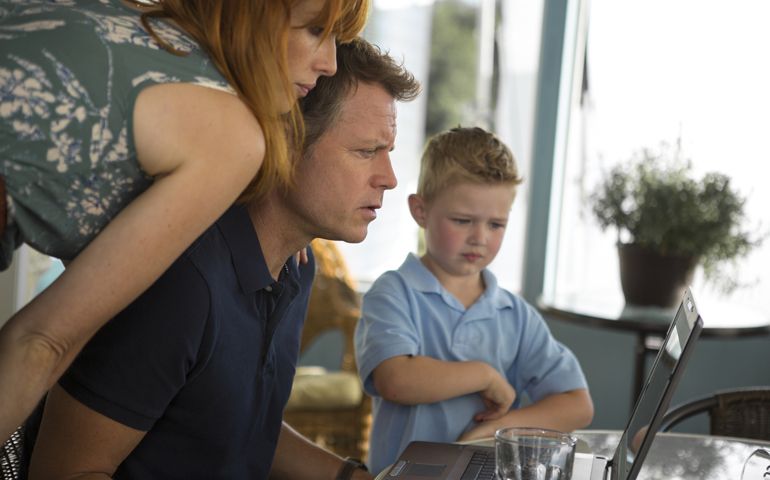 From left: Kelly Reilly, Greg Kinnear and Connor Corum in "Heaven Is For Real" (CNS/Sony)

By now, most people know that I am not a fan of the "Christian" movie genre when these films are more about teaching than storytelling and making sure audiences get "the message" rather than trusting them to use their own moral and religious imagination to savor the story. These films might be movies, but they are certainly not art. In response to the film "God's Not Dead," I wrote an essay called "How movies can save people," and I make the distinction between "Christian" genre films that are confessional in nature (think "Facing the Giants" or any film from Pure Flix, Randy Travis' and his former wife's company) and films that tell a great story that happens to be about Christians, such as "The Blind Side."

And now, here comes "Heaven is for Real," based on the 2010 best-selling book Heaven is for Real: A Little Boy's Astounding Story of His Trip to Heaven and Back, written by Todd Burpo (the child's father) and Lynn Vincent.

When young Colton (Connor Corum), not even 4 years old, becomes ill and must have emergency surgery, his parents are frantic. Todd (Greg Kinnear) is a Methodist pastor in the Midwest, and he rails at God in the hospital chapel. He has had several health issues himself, and the family is struggling financially, so this seems to be too much. Todd's wife, Sonja (Kelly Reilly), in another room, starts to call members of the church to ask for prayers.

Meanwhile, the doctors are working on little Colton, who never stops breathing and whose heart never stops beating.

Colton makes it through the surgery, and as life gets back to normal, Colton casually mentions to Todd one day that he met Jesus during the operation, that he had gone to heaven, that he saw his dad yelling at God and his mom talking on the phone in another room during the operation. Todd is astounded and tries not to ask leading questions. Colton goes on, over time, to describe Jesus, how he met Todd's beloved grandfather, how heaven is like Earth, only much more colorful, and how Jesus has a rainbow-colored horse.

Todd shares this news with Sonja, who doesn't know what to say. Then Colton, alone with his mother one day, tells her something he could have no way of knowing. Sonja is astounded.

As word gets around, people want to know more about Colton's trip to heaven. Meanwhile, the family business is in crisis, and the church elders (played by Thomas Haden Church and Margo Martindale) are not happy with the direction of Todd's preaching or with his absences because of his own health challenges.

I liked "Heaven is for Real" for several reasons. First of all, Oscar-winning director Randall Wallace's touch for this story is just right (he co-wrote the screenplay with Chris Parker). Then, as Todd has to deal with the mystery of what happened to his son on the operating table, Wallace leaves it up to us to accept the story as-is, to dismiss it, or to simply contemplate the possibility of (or, for believers, the reality of) heaven. Wallace does not offer any pat answers; he is content to leave us with the questions. This is why his film doesn't fall into the "Christian" genre film; it's a compelling story, not a canned sermon.

At the press day for the film, I asked Wallace why he used the church to depict heaven, and he explained that there was no way to really represent heaven or even to show Jesus, so he has Colton in the place where he is already comfortable: the family's church. There, Jesus, whose face we do not see, comes to meet Colton and takes him by the hand out of the church for the tour that we do not get to see.

And it is in the church where my favorite part of the film happens. As Colton enters, he hears angelic singing, and we see some forms in the sanctuary. But Colton is not much into classical heavenly tunes, so he asks them to sing his favorite song, "We Will Rock You." The angels begin to laugh. It's such an imaginative way to deal with the supernatural, and it quite surprised me. There's no commentary on this; you get to deal with what you think the angels' laughter means.

Colton was not yet 4 years old when he began talking about his trip to heaven -- or whatever it was. The story came out here and there over several months and then subsided; today, Colton, now 16, does not remember anything from that time.

The writers added Martindale's character, Nancy Rawling, to the story to create some extra tension and to provide a way to talk about God's love even when a son dies, as Nancy's had. I asked Church if he accepted the role of Jay Wilkins, the family's banker and church elder, because of his last name, and he laughed and assured me that this was not what motivated him. He does believe in heaven, as does Kinnear.

"Heaven is for Real" is about Christians and how Christians talk about, and perhaps imagine, heaven to be. As Sonja says in the film, everything Colton describes is what he has seen and heard his whole life, which would explain his "trip to heaven" until he mentions things he could not otherwise have known. But there may be a human explanation even for this. I thought that he could have overheard his parents talking when he was very, very young, and the anesthesia could have unsettled some deep memories and impressions. But who knows? You are completely free to take it or leave it or stand somewhere in between, and I don't think either the Burpos or the filmmakers will mind.

In the book, Colton describes the Father, Son and Holy Spirit. And when Catholics asked about Mary, Todd asked Colton, and he said she was there, near Jesus, as a mother would be. This part was not in the film, but the film doesn't really get very doctrinal. It's about seeing and imagining Colton's experience as related to his parents, especially his father.

The film's production values are very high and the colors deeply saturated and beautiful, perhaps trying to reflect Colton's description of heaven as being like Earth, only more so. Connor Corum is luminous as the young Colton, and I must say Kinnear's performance is quite credible. I didn't think Reilly as Sonja was very good at first, but she gradually seemed to grow comfortable in her role.

Personally, I have no idea what heaven will be like. I just want all the people I have loved or wanted to meet to be there.

Once, I asked one of our elderly nuns, Sister Concetta, who used to talk about going to heaven all the time, what she was going to do when she got there. She said, "I am going to sit at the feet of Jesus and gaze upon him all day long."

I rather shocked her when I replied, "Take a number! Do you know how many people are in line ahead of you?" I honestly don't believe she ever thought of heaven that way, and one of the other sisters chided me for possibly upsetting her. But think about it. If you don't like Randall Wallace's "heaven," how do you think it will be? Can we be OK with the mystery?

Terrence Malick's vision of heaven in "The Tree of Life" was like a barren moonscape, but perhaps he was depicting an "in-between" place. "What Dreams May Come" used brilliant visual effects to show heaven -- and hell. The Catholic Christian imagination has influenced artists of all kinds for 2,000 years. Human beings are limited and shaped by the imaginations of those who have come before us in drawings, paintings and films. The filmmakers here don't stray far from what we have seen in a Christian Sunday school in order to reflect Colton's experience better.

Some may see Wallace's film as prosaic, predictable and maybe even corny. But one thing it is not is preachy. Should you decide that it is rather mundane, know that there are lovely moments in it anyway. And with this Easter release, it is a comfort to see our faith in the afterlife reaffirmed. And angels laugh and Jesus has a rainbow-colored horse.

Culture | 'Heaven is for Real' is a compelling story, not a canned sermon

We are amalgams of animal and angel, with a mind in the middle

The victory of heaven is won through small efforts, pope says

'Is my dad in heaven?' little boy asks pope