Heed Francis’ message: be good stewards of the earth 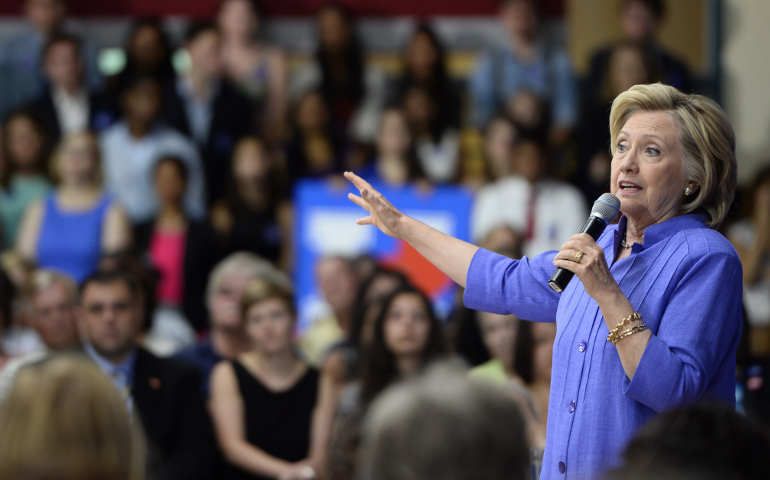 This summer, for the first time since the Apollo 17 mission, NASA published pictures of the Earth captured in a single frame. They show our “blue marble” shining brightly in the darkness and vastness of space — a view of our world beamed by a satellite one million miles away. The pictures remind us all that our life here is mysterious, fragile, and worth fighting for.

His Holiness Pope Francis calls Earth “our common home.” “Our common home requires our striving for the common good,” Social Service Sr. Simone Campbell, one of the Nuns on the Bus, wrote earlier this year.

Other faith traditions believe this, too — including mine. As a Methodist, I was taught that we have a sacred duty to care for God’s earth. “All creation is the Lord’s,” say the Methodist social principles, “and we are responsible for the way we use and abuse it.”

As a person of faith, a mother, and a grandmother, I am deeply moved by Pope Francis’ recent teachings on climate change — to reflect and above all to act.

The effects of climate change are too obvious to ignore. We can see them with our own eyes, in our own communities. In California, higher temperatures have worsened a brutal drought, which has lasted four years and shows no signs of abating. In New York, flooding from Hurricane Sandy was made worse by the fact that New York Harbor is nearly a foot higher now than it was 100 years ago. In Alaska, villages that were settled before the United States even existed are facing imminent destruction because of a rising ocean, retreating ice and more violent storms.

There’s no time to waste. We have to act now.

Pope Francis is right. All countries and all people are responsible for preventing the worst impacts of climate change. But countries like the United States have a particular role. We are rich, powerful, and blessed with many advantages. We must lead the charge.

Climate change will have serious economic and public health consequences for the United States — but that’s nothing compared to what some other countries face. At the Copenhagen climate conference in 2009, I listened as the leaders of small island nations like the Maldives pleaded for the world to act. Otherwise, they said, our homelands will cease to exist. Rising seas will engulf us.

I’ve met with leaders from Africa’s Sahel region. Droughts there have created millions of climate refugees.

For the first time in history, we are within reach of eradicating hunger and extreme poverty. But climate change threatens that progress.

Thanks to President Obama’s leadership, the United States is rallying the world to act. Now Pope Francis is bringing his extraordinary moral leadership to the fight.

I’m grateful — as so many Americans are — for the pope’s teachings. And as president, I hope to follow his example. I will make combating climate change a top priority of my administration.

We’ve made progress in promoting clean energy. Now we must do more to help developing countries embrace lower-carbon fuel sources, and continue to pick up our pace at home.

We’ve made progress in managing our lands and waters. Now we must do more to protect our global forest, which is still being slashed and burned, and our global ocean, which is growing more acidic, threatening the lives and livelihoods of billions of people.

We’ve made progress in cleaning our air over the last 40 years. Now we must do more to protect our poorest and most vulnerable citizens — including the elderly, children and communities of color — from the worst health effects of climate change.

But in spite of the strongest possible scientific consensus about what climate change means for our environment, economy, health, and future, there are still some who deny the facts. They’re intent on obstructing progress.

We can’t let them win this fight. We have no choice. There is no Planet B.

We need to develop an ethic of stewardship, of responsibility and sustainability — in our businesses, in our governments, and as citizens of the earth. The scale of the challenge we face demands nothing less.

The great American conservationist John Muir wrote, “Everybody needs beauty as well as bread, places to play in and pray in, where nature may heal and give strength to body and soul.” Climate change threatens every place on our planet, from majestic landscapes to ordinary city streets. It threatens every facet of our economy—our agriculture, energy, transportation and tourism. And most importantly, it threatens the health, happiness, and future of every one of our children.

I want my granddaughter Charlotte to know that her grandmother did everything possible to protect and preserve God’s gift to us, this beautiful planet, our common home. That’s why I’m in this fight. And I want all children everywhere, in countries large and small, to know the same thing about their leaders.

This week, as Pope Francis visits the White House, Congress and the United Nations, I urge Americans of every faith and political persuasion to listen to what he has to say. Heed his message of God’s love for all creatures. Follow his urging to become good stewards of the earth. And do your part to fulfill our shared responsibility to our planet, our children, and our future.

[Hillary Clinton is a Democrat running for president in 2016.]

World | Heed Francis’ message: be good stewards of the earth