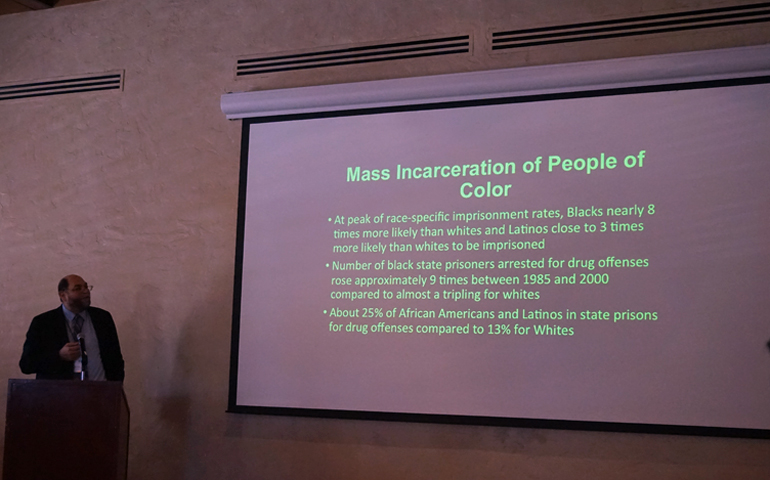 United in their concern about policies of detention and incarceration that disproportionately affect their communities, Hispanic and black theologians gathered for a rare joint meeting June 4-7 in Albuquerque. More than 80 scholars met to respond to the biblical call to "Set the Captives Free," the colloquium's theme.

The meeting combined members of the Black Catholic Theological Symposium with those from the Academy of Catholic Hispanic Theologians of the United States, also known as ACHTUS — only the third such joint meeting in ACHTUS' 39-year history, according to ACHTUS president MT Dávila, who also spoke with NCR after the event.

The four-day ACHTUS/BCTS colloquium, which preceded the Catholic Theological Society of America convention in Albuquerque, featured speakers in Spanish and English, a viewing of the documentary "13th" about race and mass incarceration in the United States, and a panel of ex-offenders from re-entry programs in the Archdiocese of Santa Fe.

Speakers criticized as immoral "the emergence of the prison-industrial complex and the immigration complex" in which powerful, well-connected individuals "have benefitted tremendously from locking up people of color, particularly African Americans and Latinos, but increasingly Arabs and Muslims," according to Rogelio Sáenz, dean of the College of Public Policy at the University of Texas at San Antonio.

Dávila noted that incarceration, detention and deportation all "stem from the urge of Western and U.S. society to contain black and brown bodies," citing the example of African-American students at a Boston-area charter school being punished for wearing hair extensions. In communities of color, mass incarceration and deportation are "decimating our population," she said.

Although Anglo theologians increasingly have joined the fight against for-profit prisons and threats of deportation of immigrants, Dávila called for more listening to black and brown theologians, as well as to incarcerated people themselves. Black Catholic Theological Symposium members carried the message to the wider theological community, with a session on "To Set the Captives Free" at the Catholic Theological Society of America convention.

The Academy of Catholic Hispanic Theologians of the United States also recognized Ana Maria Pineda, associate professor at Santa Clara University, for achievement in theological writing with its Virgilio Elizondo Award. The ACHTUS Award for an organization's contributions to Latino/a theology went to La Comunidad of Hispanic Scholars, which is part of the American Academy of Religion.