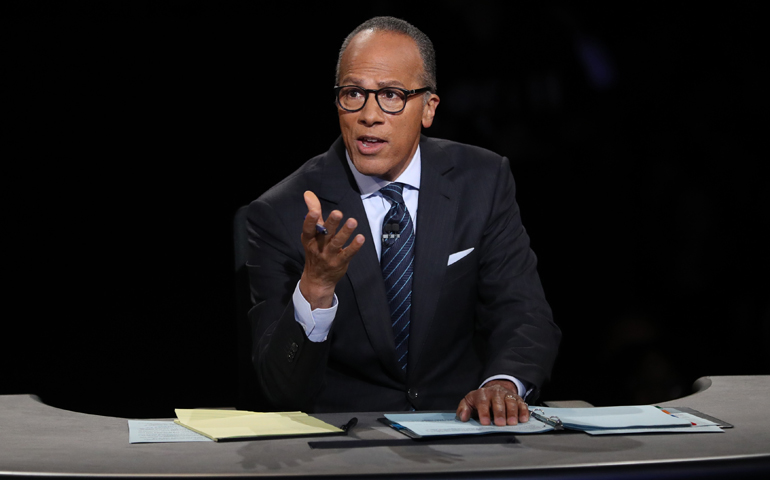 As moderator of the first presidential debate Sept. 26, Lester Holt failed to distinguish himself as a fact-checker or even, for that matter, as much of a referee of civil debate. In the process, the NBC news anchor succeeded in letting the candidates reveal themselves in ways that would never have unfolded in more orderly proceedings.

As Donald Trump repeatedly steamrolled Holt's efforts to enforce agreed-upon time limits, especially during the evening's second half, the Republican candidate stumbled into the aggressive incoherence that he was presumably hoping to avoid.

Hillary Clinton wasn't especially respectful of Holt's requests, either, but she managed to skirt them in ways that suggested a candidate focused on scoring her own points as opposed to picking fights with a timekeeper.

Many of Holt's predecessors in the hot seat -- Bob Schieffer, Ann Compton and others -- warned him off becoming a third actor on the stage. And that restraint was evident as he backed down from Trump's repeated interruptions and refusals to yield the floor.

In the course of pushing back on the moderator so relentlessly -- "Wait a minute. Wait a minute, Lester!" -- it was Trump who cast Holt in an onstage role that diminished his own. Trump's undisciplined romps contributed to the rotten tomato reviews tossed his way almost immediately even by GOP analysts like Steve Schmidt, the former strategist for John McCain.

NBC social media strategist Jake Beckman summed up Schmidt's critique of Trump like this on Twitter:  "'somewhere between incoherence and babble' says steve schmidt, the guy who brought us sarah palin, vp candidate."

It’s not that these candidates didn't need fact-checking. Though in different degrees, the assertions and dodges of both have underscored the vital role of independent journalists to an extent unparalleled in the recent history of presidential campaigns.

As I watched the debate on TV with my Macbook Air in my lap, though, I was not surprised to find better sources of fact-checking than someone struggling to keep track of time and forcing as many specifics as possible from the candidates in front of him.

In cases of clear distortions like Trump's revisionist view of the support for the Iraq war he expressed to Howard Stern in 2002, Holt held his ground, insisting: "The record shows otherwise."

For other, more complicated points either in contention or in outright conflict with the truth, I was happy to refresh The New York Times webpage where four veteran campaign reporters were keeping the candidates honest.

The first fact-checking bell went off for me about 15 minutes into the debate, when Clinton said: "Donald thinks that climate change is a hoax perpetrated by the Chinese. I think it's real." Trump interrupted: "I did not. I did not. I do not say that."

The Times quickly posted a tweet from Trump from Nov. 6, 2012: "The concept of global warming was created by and for the Chinese in order to make U.S. manufacturing non-competitive."

Other news organizations mounted similar efforts, having researched likely whoppers ahead of time, with evidence amassed in some cases for cutting and pasting as needed.

In the annotated transcript generated by The Washington Post, clicking on the China/global warming exchange yields a note from Post reporter Aaron Blake asserting that Trump "most definitely did say" what Clinton said he did, also quoting Trump's own tweet.

"The two candidates traded attacks that were largely accurate, but they had some trouble with facts when it came to their own records.Trump repeated false claims that he opposed the war in Iraq and that Clinton’s 2008 campaign started the birther movement. Clinton overstated when she said Trump doesn't pay federal income tax and understated her own position on trade deals."

That's the sort of detail and context that's simply unrealistic to expect from a moderator in the thick of things.

When Fox News anchor Chris Wallace was asked recently how he intends to handle his moderation of the final presidential debate Oct. 19, he said it's not the job of the moderator to be "a truth squad."

Wallace took some heat for the comment, with many arguing that "truth squad" is exactly the role journalists should play in a debate. But the key word here is "squad." By combining restraint with insistence when called for, Holt navigated a course that, in the end, served the truth-telling mission quite well.

As Wallace prepares for his own night in the hot seat, he'd be smart to consider the path blazed Monday night by Holt: Function as the truth squad's first responder for outrageous untruths, but leave the heavy lifting to fellow journalists with the expertise and immediate bandwidth to separate fact from bombast and spin.

It turns out that moderating a debate, like fact-checking, takes a squad.

[Bill Mitchell teaches journalism ethics at Northeastern University and is a former  member of NCR’s board of directors.]