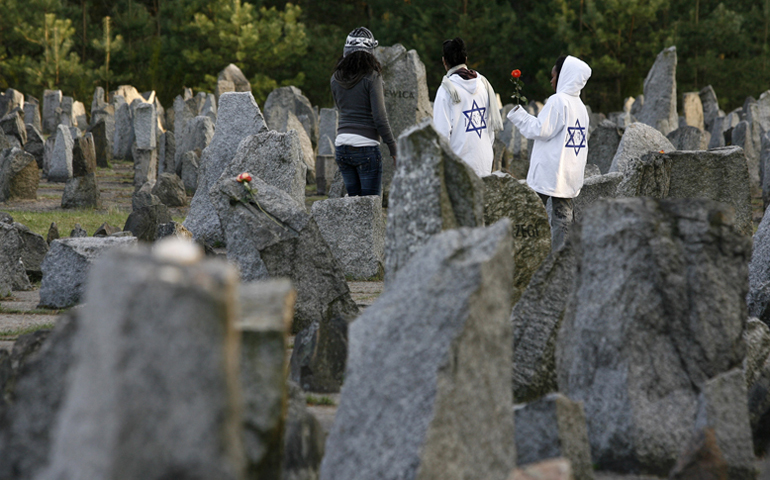 Let me tell you where I was when I learned about the Iran deal: I was leaving Treblinka.

My wife and I have just returned from a journey to Poland for parents of United Synagogue Youth members.

We visited Warsaw, Krakow, Lodz and Lublin -- with pilgrimages to the concentration camps of Auschwitz-Birkenau, Majdanek and Treblinka. We visited the Polin Museum of the History of Polish Jews, perhaps the greatest Jewish museum in the world. We witnessed the rebirth of Polish Jewry, which gave me a powerful lesson in the meaning of the Jewish prayer that thanks God for the resurrection of the dead.

What does it mean to hear about the Iran deal on the way out of Treblinka?

In the words of my friend, journalist Yossi Klein Halevi: When someone says they want to destroy you, believe it. Because that is precisely what the leaders of Iran have been saying, all along, about Israel.

Mohammad Reza Naqdi, commander of the Basij militia of Iran's Revolutionary Guards, has said that "erasing Israel off the map" is "nonnegotiable."

Iranian Supreme Leader Ayatollah Ali Khamenei has repeatedly called for the destruction of Israel, stating that the "barbaric" Jewish state "has no cure but to be annihilated." One of his officials has said his government has a "godly ordained right" to annihilate Israel.

Iran's anti-Semitic, anti-Israel obsession is common knowledge. That is why we have every reason to be wary of a deal that allows that regime access to nuclear arms in 15 or 20 years. The genocidal fantasies of Iran have no expiration date. Their timetable is not our timetable. They are on the apocalyptic clock. They can wait.

Make no mistake: Each Iranian nuclear weapon will be a Treblinka on wings.

But in recent days, the general, non-Jewish press has been silent about this aspect of the Iran issue. As if we would rather not remember.

Some will say this is just Jewish paranoia. The words of the Iranian leaders are simply hyperbole, intended to arouse the Iranian masses.

Really? Isn't it Western intellectual arrogance to imagine that when a Third World leader says something, he doesn't really believe it? After all, if right-wing, bigoted American politicians say something untoward about various minority groups, don't we take them at their word?

In 1974, after the Yom Kippur War, Cynthia Ozick wrote an article for Esquire magazine, famously titled "The Whole World Wants The Jews Dead." Her critics attacked her for being overwrought. (It is possible that Ms. Ozick did not choose the title.)

But why should the Jews, of all minority groups in our culture, be begrudged the emotional space in the public arena to speak of their legitimate fears?

Just as Western ears and eyes could not cope with the unfolding horror of the Shoah, many today refuse to grasp the immensity of radical evil. The late singer Richie Havens sang: "I don't want to know about evil; I only want to know about love."

Excuse me: We are not in Woodstock anymore, and we have not gotten back to the garden. And last time I looked, Iran is not Denmark.

In the next 60 days, we are going to be spending a lot of time thinking about, arguing about, and yelling about the following question: Is this a good deal, a bad deal, a "best we could hope for without war" deal?

As for me, I have no privileged information, diplomatic expertise, or ideological axes to grind.

All I have is this: the recent memory, scraped into my soul, of standing at the steps that led to the gas chambers at Auschwitz-Birkenau. I have the historical memory of the one who threatened to destroy the Jewish people and came very close to doing so.

I was discussing the Iran deal with a good friend of mine, who is a Christian pastor. He believes in it. He thinks it's a good deal.

This is what I said to him: "If you need to defend this deal to your parishioners, all I ask is this: Can you also remind them that the supreme leader of Iran wants the Jewish state dead?"

There was a brief silence on the other end of the phone. And then he said: "Fair enough."

Please don't ask us to be good sports about this and brush those concerns aside as if they don't matter. Jewish lives matter, too.

[Rabbi Jeffrey K. Salkin is the spiritual leader of Temple Solel in Hollywood, Fla., and the author of numerous books on Jewish spirituality and ethics, published by Jewish Lights Publishing and Jewish Publication Society.]