I won't call Donald Trump 'Mr. President' until he earns it 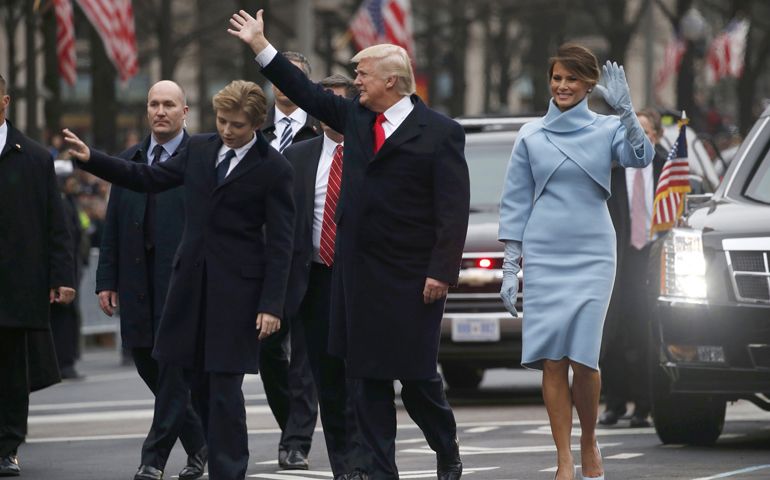 U.S. President Donald Trump and first lady Melania Trump wave as they walk with their son, Barron, along Pennsylvania Avenue during the Jan. 20 inaugural parade from the U.S. Capitol in Washington. (CNS/Jonathan Ernst, Reuters)

I can't and won't accept Donald Trump as my president until he shows that he will protect the rights of all Americans and not just his billionaire class. He has to prove that he is the president of all Americans and that he supports basic Constitutional rights and will uphold the laws of the land. The ball is in his court. I will not call him "Mr. President" until he acts and talks like "Mr. President."

I have been shocked about his behavior and language since the election. Some believed that after the election he would act more presidential. That has been far from the case. He continues to behave and talk like a bully and exhibits thin skin about any criticism of him. Moreover, his nominations for Cabinet posts have been startling with inexperienced and mostly rich white men who have voiced to destroy the very departments that they will lead. Trump won fewer votes than Hillary Clinton, but he acts like he won in a landslide. Even before taking office, he is challenging and flaunting precedent and traditions expected of all incoming presidents.

This particularly pertains to his financial holdings which he refuses to separate from, and from which he stands to profit in his role as president. This includes still refusing to reveal his tax records that may show his business relations with foreign interests and governments, which may compromise his foreign policy.

In addition, he is continuing to wage war against the concept of a free press. It seems that his first war will be against the media especially those who are critical of him. He seems to want a controlled press and is taking his cue from Putin who has done that in Russia. But the attack against the press will be only the beginning of other assaults on our liberties as Trump will move to establish a version of a police state.

Looking back over his actions since he became a candidate, I have become to see that he and his cronies seem to have taken their playbook from the rise of fascism. Once they violate the human rights of some, such as immigrants, they will move on to others including us. I have said before that we have never been so close to fascism then with Trump's election. His actions since then have only supported this.

But we can also learn from what happened in Germany in the 1930s and instead of appeasing Trump in the hope that he won't turn on us, we need to organize and use our bodies as was done this Saturday when millions marched against the threats of Trumpism. What we saw was people power and that is what will be needed to counter the threats to American democracy. People at the grassroots level need to organize in a nonviolent fashion as a counterweight to the Trump administration. People power must rise again as it did in the past with respect to ending slavery, getting women the right to vote, gaining workers the right to unionize, and achieving civil rights for African Americans, Latinos, other minorities, and gays.

This legacy of nonviolent resistance needs to be resurrected. Only if Trump disavows his threats against our liberties and federal programs that provide a safety net for people will I call him Mr. President.

Politics | I won't call Donald Trump 'Mr. President' until he earns it

How some abortion opponents get 'pro-life' radically right

Nurses say they were forced to assist in abortions