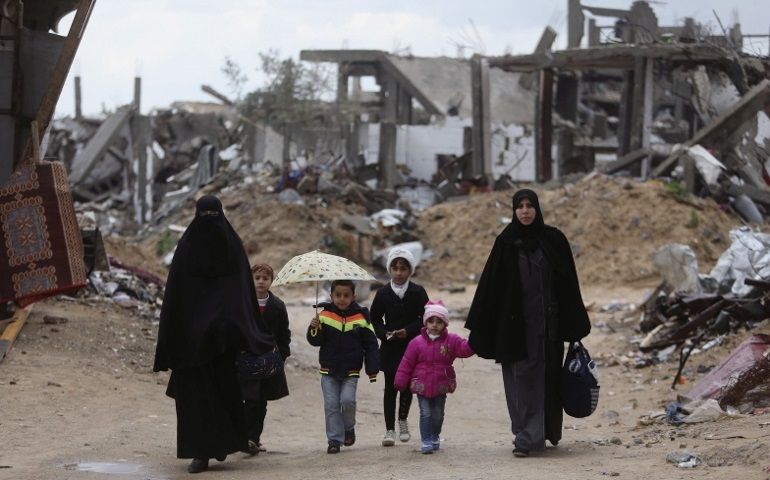 In February 2015, Palestinians walk near the ruins of houses that witnesses said were destroyed or damaged by Israeli shelling during a 50-day war in the summer of 2014, near Gaza City. (CNS/Ibraheem Abu Mustafa, Reuters)

As the U.S. movement in support of Palestinian rights gains momentum, it has come under increasing attack by supporters of Israel's right-wing government and defenders of its occupation and colonization of occupied territory. For example, governors, state legislatures, and members of Congress of both major parties have referred to efforts to use such tactics as boycotts, divestment and sanctions in opposition of such policies as "anti-Semitic."

In many cases, such accusations can simply be dismissed as a kind of disingenuous McCarthyism designed to discredit peace and human rights activists, much as charges of "communism" were leveled in previous decades against those who opposed the Vietnam War and U.S. intervention in Central America.

At the same time, as with charges of racism or sexism, there are some cases where such concerns should not be summarily dismissed. Indeed, such oppression sometimes manifest itself in more nuanced ways that make it difficult for those of us in non-target groups to recognize.

As someone who has been involved in peace and human rights movements regarding a number of countries and conflicts in the world, including Israel and Palestine, I would like to address some of the questions regarding this often divisive matter.

Is opposition to Zionism — the Jewish nationalist movement that led to the establishment of modern Israel — inherently anti-Semitic?

It certainly is not anti-Semitic to argue that whatever emancipatory elements that Zionism may have provided some Jews has been more than offset by the expulsion, occupation, repression and killings of the indigenous Palestinian inhabitants. While Zionism can be seen as a national liberation movement for Jews, it undeniably also has characteristics of a colonial settler state. Like other European nationalist movements that emerged in the late 19th century, there were certainly racist assumptions at it foundation.

In addition, there are those who can reasonably object to any nationalist movement based on a particular ethnic or religious identity at the expense of others.

Anti-Zionism could be reasonably considered anti-Semitic when it is used to describe some kind of monolithic conspiratorial movement in a manner traditionally used by anti-Semites to describe Jews. Indeed, claims that "the Zionists" control the media, government, financial institutions, etc., are simply a rehashing of old-fashioned anti-Semitic canards.

Another example is in describing Zionism as its worst manifestations. For example, describing Israeli government policies such as bombing Palestinian neighborhoods, constructing Jewish-only settlements in occupied lands, or destroying Palestinian homes as "Zionist" ignores the many self-described Zionists in Israel and elsewhere in the world who strongly oppose such practices.

Like other nationalist movements, there is a diversity of perspectives among Zionists. One can still question the legitimacy of Zionism without representing it as its worst historical elements.

Despite some accusations to the contrary, it is certainly not anti-Semitic for someone to focus more on challenging Israeli policies or U.S. military, economic and financial support for Israel than for other repressive governments. The Israeli government is by far the primary recipient of U.S. military assistance. Its violations of international legal norms have been shielded by more than 40 U.S. vetoes in the U.N. Security Council. It receives unconditional support from an overwhelming bipartisan majority of Congress, even among many otherwise liberal Democrats who have spoken out against human rights abuses by other U.S. allies.

In addition, with the exception of Morocco's occupation of Western Sahara, it is the only case of a formally recognized foreign belligerent occupation of one country by another in which the occupier denies the subjugated population its right to national self-determination. While there are certainly governments in the world responsible for far more civilian deaths or other transgressions, Israel stands almost alone in violating this bedrock international legal principle.

In any case, just as some people feel a calling to focus their energies on Tibet, Darfur, Western Sahara, Syria, Iran, Burma or any other nation in which people are threatened and denied their rights, there are any number of reasons unrelated to any kind of prejudice or bigotry that could lead someone to focus more on Palestine.

Where one might suspect anti-Semitism would be regarding those who criticize Israel for similar policies they defend by non-Jewish governments: For example, rationalizing Syrian or Saudi attacks on urban neighborhoods or defending the Moroccan occupation.

A related issue regards understanding why the United States supports Israel. It would be unfair to accuse people of anti-Semitism for raising concerns about the inordinate influence of lobbying groups and political action committees allied with the Israeli government. However, to suggest that the United States would otherwise pursue a Middle East policy consistent with international law, human rights and enlightened self-interest — which the U.S. has largely failed to do in other world regions as well — attributes too much power to American Jews.

For example, when a member of Congress takes a right-wing position on virtually any issue, the assumption is that it is a result of his or her ideological proclivities. However, if the same politician takes a right-wing position in relation to the Middle East, there is often an assumption that they are being forced to take such perspectives due to powerful Jewish interests.

Exaggerating Jewish influence as a means of absolving non-Jews who actually wield power of responsibility has been a favored approach of anti-Semites for centuries.

Indeed, those of us familiar with U.S. foreign policy recognize the long-standing willingness of the United States to rationalize and cover up human rights abuses and even war crimes by allies and to exaggerate the cruelties and aggressiveness of perceived adversaries. One needs to look no further than East Timor, Nicaragua, Angola or other controversial U.S. policies to recognize that while right-wing Zionist groups may have made reasonable debate regarding Israel and Palestine more difficult, the overall thrust of U.S. policy in the Middle East would, unfortunately, be pretty much the same even without the "pro-Israel lobby."

Any and all manifestations of anti-Semitism must be challenged, including those in relation to Israel. At the same time, we must not allow false charges of anti-Semitism to deter us from defending human rights and working for peace.

Religious freedom in crisis around the world