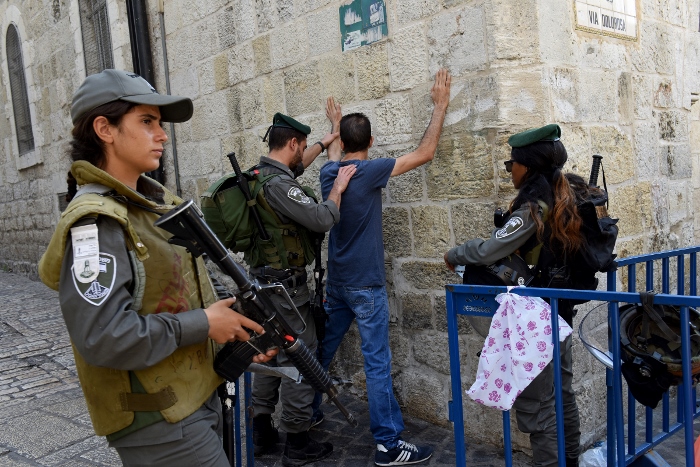 Israeli border police make a Palestinian face the wall for a body security check on the Via Dolorosa in Jerusalem's Old City Oct. 18, near a site where several recent stabbings have taken place. (CNS photo/Debbie Hill)

The latest upsurge of violence in Israel/Palestine has raised fears that a third Palestinian intifada is breaking out. In just this past month, eight Israelis and 42 Palestinians have been killed in the Jerusalem area alone. News coverage in the United States has largely adopted the Israeli government’s narrative of the violence -- Palestinians, enraged by incitement in their media regarding malevolent Israeli intentions for the Haram Sharif/Temple Mount compound, have reacted violently by embarking on a spate of knife attacks against Israelis.

Knife attacks against Israeli civilians are horrific and deserve the condemnation that they receive. However, these attacks do not occur in a vacuum, independent of the wider context in which they periodically flare up. Focusing narrowly and exclusively on one element of a much larger complicated and nuanced issue neither addresses the cause nor protects Israelis from future violence.

Instead, it serves only to further delay the possibility of any durable and serious resolution to the conflict, allows Israel to react to the violence in disproportionate ways that further fuels the cycle of violence between the two sides, and continues the dangerous slide from a political conflict that is resolvable to a religious one that is not.

Although the stabbings are a new element and Palestinian protests are an old story, the protests today involve a post-Oslo (1995) generation of Palestinians who never experienced the brief hope that Oslo brought. Instead, this new generation, in their teens and early 20s, has grown up experiencing nothing but stifling and often brutal Israeli occupation, settler violence and an impotent Palestinian Authority it barely relates to.

This current wave of violence wasn't unexpected: in September 2015, 44.5 percent of Israelis polled said that they believed a third Palestinian intifada would break out within a year if there is no progress towards peace.

The stated cause of the recent surge in attacks is Palestinians' belief that the Israeli government is trying to change the status quo at the holy compound in Jerusalem, a place revered by Jews as the Temple Mount and by Muslims as the Haram al-Sharif, or the Noble Sanctuary. According to security arrangements dating back to 1967, the site is open to Jewish visitors at specific times but sealed off to non-Muslim prayer.

Israeli Prime Minister Benjamin Netanyahu has repeatedly denied trying to bring about a change on the Haram Sharif/Temple Mount, seemingly understanding that altering the fragile prayer arrangements in the Al-Aqsa Mosque could result not only in a Palestinian conflagration but also a full-blown war with the Muslim world. Still, his assurances are belied time and again by members of his own far-right coalition, who ascend the compound, defy the ban on prayer, and speak of building a Third Temple (implicitly implying that the Muslim Dome of the Rock and Al-Aqsa Mosque would have to be destroyed to do so). In September 2015, Uri Ariel, a settler minister from the nationalist Jewish Home party, visited the holy compound and was videotaped praying there. Hamas and its offshoot in Israel, the northern branch of the Islamic Movement, have added to the tension with false rumors.

The Haram Sharif/Temple Mount compound may have been the spark for the current flare-up, but the tinder has been smoldering for years now.

From Ruth Margalit of The New Yorker:

If recent events do lead to a third uprising, Danny Rubinstein, a longtime Israeli reporter on Palestinian affairs, said, it should be known as the 'settler intifada'-- a violent Palestinian response to settler provocations. 'For the first time, there’s no restraining element in the Israeli government,' Rubinstein told me. 'The radical elements feel that they are in a position of power. They have an organized agenda. They want to bring about the annexation of Area C' -- a reference to the sixty per cent of the West Bank that is under full Israeli control. Annexation of this territory would mean that Palestinian cities like Nablus, Jenin, and Ramallah would become isolated enclaves unable to function independently, and would result, as Rubinstein put it, in 'a complete economic shattering.'

Retired Israeli brigadier general Gadi Zohar, who headed the Israeli Civil Administration (the entity that governs the occupied West Bank) from 1991 to 1994, says that this wave of violence could have been prevented, had Netanyahu stood up to two major forces on both sides: the northern branch of the Islamic Movement and the settler wing of his own government. Margalit: "Add to that the fact that there is no vision for a political solution and the massive neglect of the Arab population in Jerusalem," Zohar told me, "and it becomes combustible."

Most tellingly of Israel's intentions is the explosive growth in Israeli settlements on the same occupied land that was supposed to be part of a future Palestinian state. When negotiations on the Accords began, there were 200,000 Israeli settlers in the Occupied Palestinian Territories (West Bank and East Jerusalem.) Today, according to the New York Times, there are about 650,000 of them.

The fact that every new settler serves as a tiny nail in the coffin of a political solution is not lost on the average Palestinian living under occupation, whose very daily existence is one of curtailed movement, scarce resources and harassment, all in the name of appeasing the settlers.

The challenge today is not simply ending the current upsurge of violence. Instead, it is to give the young people who are now turning to violence a different option, As veteran security columnist Nahum Barnea writes in Ynetnews.com, the English version of Israel's largest and most popular news and content website: "We need to give them a good reason to live. ... On this matter, both Israel and the Palestinian Authority (PA) have failed. Both have offered the masses of youths who have grown up in Gaza and the West Bank only one option: Despair. Things have reached an apex in recent years: No expectations, no future, no hope."

For Barnea, the root of the problem lies in Israel's refusal to make a choice to either live as equals with the Palestinians, or to disengage from its occupation over them. He warns that Israeli ministers are pursuing a dangerous course in opting for escalating collective punishment of Palestinian communities. "They believe that despair can be beaten with more despair, that mutinies can be quashed by punishment, taxes and draconian fines."

History has proven Barnea right. The current Israeli government’s menu of measures to address the violence is simply vengeful and inflammatory, which may even be its point. They include not returning the bodies of dead Palestinians involved in the violence and demolishing the homes of the families of accused attackers and never permitting them to rebuild again.

On the other hand, Israeli Jews involved in attacks, such as the stabbing at the Jerusalem Gay Parade in August 2015, or the Israeli who stabbed four Palestinians in southern Israel on October 9, 2015. No deadly force was used in their apprehension and no homes of families demolished. The double standards create a culture whereby Israeli security forces and would-be Israeli attackers feel that they can kill Palestinians with impunity.

After nearly five decades of Israel’s occupation and denial of their freedom, Palestinians, like other oppressed people around the world, have reached their breaking point. A young Palestinian population that has lived its entire life under illegal and repressive Israeli military rule has had enough.

The current upsurge of violence will inevitably end leaving in its wake grieving families and increased hatred as it is inevitable that the violence will be repeated in the future. It is only by addressing the root cause of the conflict, the Israeli occupation of Palestinian land and all of its manifestations, that the cycle of violence will be broken and both peoples, Israelis and Palestinians can live their lives in the security and hope that they deserve.

[Jesuit Drew Christiansen is a distinguished professor of ethics and global human development at Georgetown University; Ra'fat Aldajani is a Palestinian-American political commentator.]