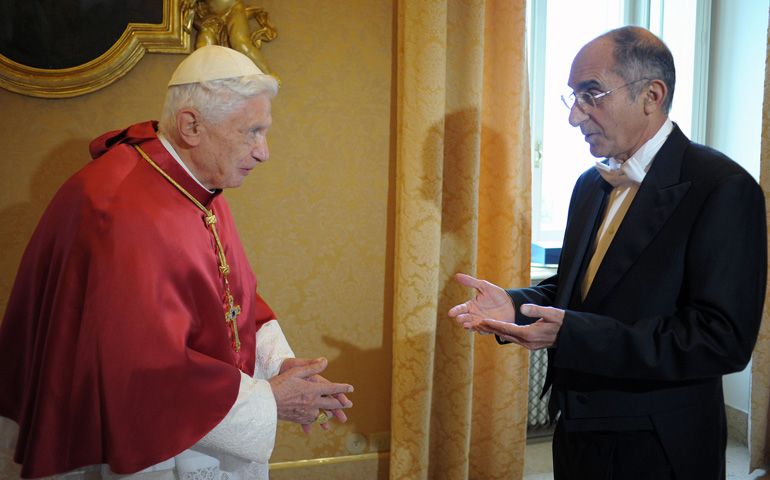 Jesuit-run Rockhurst University partnered with the Jewish Community Relations Bureau and the American Jewish Committee to bring the ambassador to Kansas City, Mo. Evrony has served at the Vatican since 2012. Before that, he was Israel's consul general in Houston and Israel's ambassador to Ireland. Evrony's lecture was titled, "Conversations between Jerusalem and Rome."

"The relations between the Jewish people and the Catholic church may be the best they have been in 2,000 years," Evrony said.

He explained how his encounters with Popes Benedict XVI and Francis have been "positive and warm," and he thanked "both popes for their friendship with Israel."

"I see myself as ambassador to the Catholic world. My job ... is to create more understanding for Israel's unique circumstance and the threats it faces," Evrony said.

When Francis first saw Evrony in a crowd of Vatican ambassadors, Francis waved at him and said, "Shalom." He then asked Evrony to "please pray for me," the ambassador said.

Evrony said this encounter was drastically different from just 100 years ago, when Pope Pius X met Theodor Herzl, the father of modernist Zionism. Herzl sought the Vatican's support for the establishment of a Jewish state in Palestine, but Pius refused him, saying, "The Jews have not recognized our Lord, therefore we cannot recognize the Jewish people."

Evrony mentioned Francis' friendship with Argentine rabbis, and how "his new style, his new universal message of caring for poor, love of peace, love of the environment and interreligious dialogue, makes it very interesting to work with the Holy See."

When Francis told a group of Jewish representatives in June, "Due to our common roots, a Christian cannot be anti-Semitic," Evrony said he felt great optimism for the future of Catholic-Jewish interchange.

"We always have to keep a sense of optimism," Evrony said. "In the Holy Land, if you don't believe in miracles, you are not living in reality."

He concluded his lecture by reminding the largely Catholic audience that there is "more that unites us than that divides us," and asking them to "pray for the peace of Jerusalem."