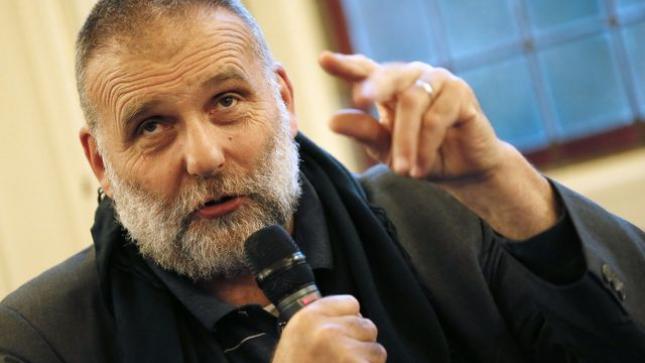 As confusion continues to surround the whereabouts of two kidnapped Orthodox bishops in Syria, a Jesuit expert says it's time to "decriminalize" the word jihadist in thinking about the conflict.

"It means a believing Muslim person who's obedient to the divine order to commit oneself to the struggle for justice, including militarily," Jesuit Fr. Paolo Dall'Oglio told a crowded assembly Tuesday afternoon in Rome. He compared the armed uprising in Syria to the Italian resistance against fascism.

"There is no contradiction between jihad and democracy," Dall'Oglio insisted.

Dall'Oglio was speaking at a conference on Syria organized by FOCSIV, a federation of organizations of Christian volunteers. He was joined by Franco Frattini, an Italian politician and the country's former foreign minister under the center-right government of Silvio Berlusconi.

Frattini began by confessing he wasn't sure what to do about the Syrian conflict, in part because he's not clear "on the force of jihadist movements within the opposition."

That brought a response from Dall'Oglio, who spent almost 30 years living and working in Syria before being expelled in 2012 for his support of the uprising against President Bashar Assad.

"The great majority of armed youth in Syria today is democratic," he said. "They're fighting the criminal exercise of indiscriminate repression and torture -- the use of aerial bombings, Scud missiles, even chemical weapons."

"Jihad is simply the Muslim word for resistance," he said. "Fear of jihadism is no excuse for denying a people their legitimate right to self-determination."

While acknowledging the risk that extremist versions of Islam pose to minorities in Syria, including the roughly 10 percent of the population that's Christian, Dall'Oglio insisted that the center of gravity in the opposition favors "an Islamic democracy along the lines of the Egyptian model."

The alternative, he said, is that "the massacres will continue and an entire generation will continue to be tortured in Assad's prisons."

Dall'Oglio also faulted Christian leaders in the Middle East for being "overly subservient" and "collaborationist" with regard to the region's regimes, including Assad, thereby "putting the Christian community at grave risk."

Had the kidnapping of the two bishops gone on longer, Dall'Oglio forecast, it would have been "manipulated" by pro-Assad forces to sow doubt in the West about the opposition.

"They want the world to believe there is no revolution in Syria, only terrorism," he said, warning that spinning things that way risks becoming "a self-fulfilling prophecy with disastrous consequences."

Prior to being expelled from the country, Dall'Oglio had been renowned in Syria for his work at the Deir Mar Musa, a 6th-century monastery 50 miles north of Damascus, which he helped convert into a center for interfaith dialogue.

Frattini offered an indirect confirmation of Dall'Oglio's assessment, saying he had recently hosted a group of young Syrians in Rome, and said the Christians among them told him "they fear the militias linked to the regime more than they do the jihadists."

Tuesday began on a new note of alarm for the kidnapping of the two bishops: the Syriac Orthodox bishop of Aleppo, Msgr. Youhanna Ibrahim, and the Greek Orthodox Metropolitan of Aleppo and Iskenderun, Msgr. Boulos al-Yaziji.

According to a report from the Asia News agency, the two bishops were stopped at gunpoint by armed men Monday on their way to the city of Aleppo. A catechist traveling with them was shot to death, while a fourth person managed to escape.

Appeals were immediately launched for their release, including a statement from the Vatican spokesperson, Jesuit Fr. Federico Lombardi.

"The Holy Father, Pope Francis, has been informed of this new and very grave fact, which is part of the growing violence of recent days, creating a humanitarian emergency of extremely vast proportions," Lombardi said.

"He's following these events with deep participation and intense prayer for the health and liberation of the two bishops, so that, with the commitment of all, the Syrian people can finally see effective responses to their humanitarian drama, and realistic hopes of peace and reconciliation can appear on the horizon."

Several reports Tuesday night and early Wednesday suggest the bishops had been freed, but the Greek Orthodox archdiocese in Aleppo said Wednesday morning they had no information on the bishops' whereabouts and could not confirm they had been released

The identity of their kidnappers remained uncertain, though some reports out of Syria suggested they had been armed foreigners, possibly of Chechen origin.

Leaders of the Syrian opposition denied any responsibility, while officials of the Orthodox church insisted they'd had no contact with the kidnappers and had not paid any ransom.

Amid the chaos, observers say that kidnappings, especially of Christians, have become a growth industry among various armed factions looking for ways to fund their activities.

In late February, the website "Ora Pro Siria," operated by Italian missionaries in the country, launched an emergency fundraising appeal it called "Ransom a Christian." According to the website, the going price for a kidnapped priest in Syria at that time was in the neighborhood of $200,000.