Leading Muslim institution hopes to reconcile with the Vatican 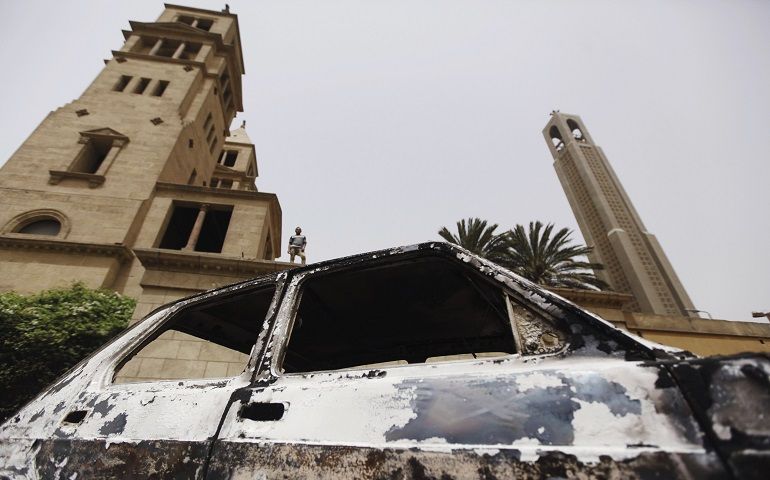 An Egyptian stands on the wall of St. Mark Coptic Orthodox Cathedral April 8, as a car burned during the previous day's clashes between Muslims and Christians is pictured in the foreground. At least two people died during the clashes outside the cathedral, and more than 80 were injured. (CNS photo/Amr Abdallah Dalsh, Reuters)

On June 7, Al-Azhar, Sunni Islam's foremost institution based in Cairo, extended an olive branch to Pope Francis through Mahmoud Abdel Gawad, diplomatic envoy to the grand imam of Al-Azhar hoping to reconcile the contentious relationship between the Islamic institution and the Vatican.

The relationship between Al-Azhar and the papacy was severed in 2006 when Pope Benedict XVI delivered a lecture, "Faith, Reason and the University -- Memories and Reflections" at the University of Regensburg in Germany, where he once served as a professor of theology.

In the lecture, he quoted Byzantine Emperor Manuel II Paleologus: "Show me just what Mohammed brought that was new, and there you will find things only evil and inhuman, such as his command to spread by the sword the faith he preached."

After seeing outrage erupt throughout the Middle East in response to his comment, Benedict invited Muslim envoys to meet with him at his summer residence and expressed hope that "after the initial reaction" his words may "constitute a push toward positive, even self-critical, dialogue between religions and between modern reason and Christian faith." Iran and Turkey accepted his offer.

Despite Benedict's later clarification that he has "profound respect for world religions and for Muslims, who worship the one God and with whom we promote peace liberty and social justice," Al-Azhar still broke ties with the Vatican.

"The problems that we had were not with the Vatican but with the former pope," Gawad said June 7.

After observing Francis' interactions with Muslims, Al-Azhar hopes to reconcile and according to Cardinal Jean-Louis Turan, president of the Pontifical Council for Interreligious Dialogue, the Vatican remains "open" to restoring normal ties to Al-Azhar, as reported by The Tablet.

The pope's actions, including washing the feet of a Muslim girl during a Holy Thursday Mass, something Gawad said was "a gesture that was very, very much appreciated," could indicate to the Muslim world that Francis aims to follow more in the steps of Pope John Paul II, who called Muslims and Jews "sons of Abraham" and organized high-profile interfaith events.

"We are expecting a step forward from him," Gawad said. "If in one of his addresses he were to declare that Islam is a peaceful religion, that Muslims are not looking for war or violence, that would be progress in itself."

In response to this request, Egypt's Coptic Christians suggested that Al-Azhar's grand imam instead denounce Muslim violence against the Coptic minority in Egypt.

"Voice of the Copts believes that the Al-Azhar grand imam instead should issue a formal, public statement directed to his followers in the Arabic language conveying an unequivocal message that Muslims attacking Christians in Egypt do not conform to a tenet of Islam and will no longer be tolerated," the Assyrian International News Agency reported.

The Copt statement went on to say that as the head of Sunni Islam's highest seat of learning, Al-Azhar has the power to "reverse the stain upon the name of Islam -- a religion that many around the world see as warmongering and violent."

According to the Copts, favorable appraisals from Pope Francis and other world leaders will do little to repair Islam's image.

"Islamic authorities of Al-Azhar must first be willing to acknowledge that progress for Islam begins with their own steps toward equality and peaceful co-existence," the Voice of the Copts said in its statement. "If so, Egypt might become a hopeful example for human rights in the Middle East instead of what the world sees there today."

World | Leading Muslim institution hopes to reconcile with the Vatican