Let's be honest: It's a lack of faith 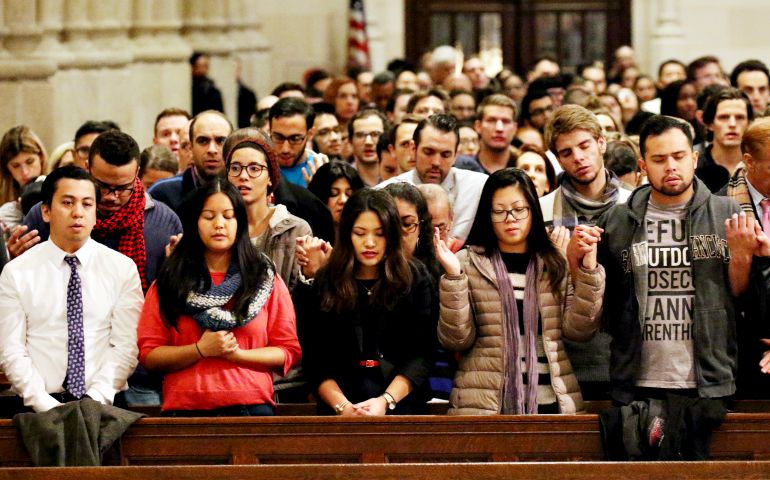 People recite the Lord's Prayer during a Mass for young adults Dec. 7, 2016, at St. Patrick's Cathedral in New York City. (CNS/Gregory A. Shemitz)

A "Shoe" cartoon I saw the other day said this: "A recent study has found that six of the seven dwarfs ... aren't happy."

The reference to Disney's "Seven Dwarfs" reminded me of a recent article in the National Catholic Reporter by Nicole Sotelo that discusses why young adult Catholics have left the church. Apparently a lot of them aren't "happy" either. The article lists several reasons for the defections.

For starters, a high number dropped out because they are unhappy with the church's teaching on sexuality — abortion, homosexuality and birth control. Another large group says they've left because of the way the church treats women. On the other hand, only a few have stopped participating because they feel that the church has abandoned traditional practices such as the Latin Mass.

Along with the findings of a number of professional studies, several other reasons are often cited for the youthful departures: the sexual abuse scandal; the hypocrisy of the members; the irrelevance of organized religion; the church isn't very welcoming; too much emphasis on money; the Mass is boring; too busy to attend, etc.

I heard of one young man, raised thoroughly Catholic, who stopped going to church because he's "angry with God." The reasons for his anger aren't clear.

Sotelo summarizes her findings by saying that if we analyze the statistics we'll find that when young people leave the church "it has less to do with a lack of belief and more to do with the fact that young people want a church they can believe in."

I'm not so sure. I think that the erosion of church participation is in fact a manifestation of a "lack of belief," or at least the consequence of a very thin and fragile faith. And all of these reasons that are so often cited for dropping out — are they reasons or just convenient excuses?

Three observations are in order.

First, I think that many of the excuses young people use for quitting the church apply to older adults as well.

Second, I'm not convinced that disagreement about sexuality morality is a primary cause of departures. If that were the case, the mainline Protestant churches would be booming, but they're not. Most of them jettisoned traditional Christian teaching on these matters a long time ago and still they languish.

And third, one of the most obvious indicators of commitment to the faith is regular participation in Sunday Mass.

Now, without a doubt, members of the church, including some priests and bishops, have given plenty of reasons for fellow members to become disillusioned and then quit. Nonetheless, if your faith is strong and resilient you overcome these hurdles and attend Sunday Mass, despite your personal experiences, disappointments and doubts.

And so, for example, if your faith is strong you go to church because you know it fulfills a divine command; it's the primary Christian, Catholic way of observing the Lord's Day. There's a tendency nowadays to overlook the concept of "obligation," in things both religious and secular. An entitled generation thinks that when they attend Mass they're doing God a favor, when, in fact they have a sacred obligation to do so, and that it's offensive to God if they deliberately choose to ignore him!

If your faith is strong, you attend Mass because an unparalleled sacred action is unfolding in your presence – the Sacrifice of Christ on the Cross, the oblation of Christ that reconciled God and man and redeemed the world.

If your faith is strong, you attend Mass because you will hear the Word of God proclaimed, in the reading of the Scriptures and the preaching of the homily. "The homilies are terrible," you say. Might be true, but remember, throughout salvation history God has managed to use flawed preachers to deliver his word effectively to his people.

If your faith is strong, you attend Mass because there, and only there, are you able to receive the Holy Eucharist, the Body and Blood of Christ. You can stay home and pray all you want, but the Eucharist is the heart and soul of our faith. "Unless you eat the flesh of the Son of Man and drink his blood, you do not have life within you," Jesus said (John 6:53).

If your faith is strong, you go to church because you realize it's important to belong to the Christian community, a community of faith and love that will accompany you through life in good times and in bad. And despite a few colorful characters and occasionally eccentric behavior (sounds like most families, doesn't it?), the church is a divine institution, established by Jesus and guided by the Holy Spirit.

When, at the beginning of her article Sotelo suggests that "young people want a church they can believe in," she misses the point. That church already exists; it's the Catholic Church, the one founded by Jesus.

Near the end of her article, however, she offers some rather encouraging words about remaining in the church. "The reasons we stay are many," she says, "including our love for the faith, our gratitude for the tradition, and the knowledge that if we work together, we can build a better church." Would that more young people shared her perseverance, commitment and faith!

Jesus asked: "When the Son of Man comes, will he find faith on earth?" (Luke 18:8) The question remains relevant.

[Thomas Tobin is the bishop of the Diocese of Providence, Rhode Island. This article was first published on the website of The Rhode Island Catholic, the diocesan newspaper.]

Parish | Let's be honest: It's a lack of faith