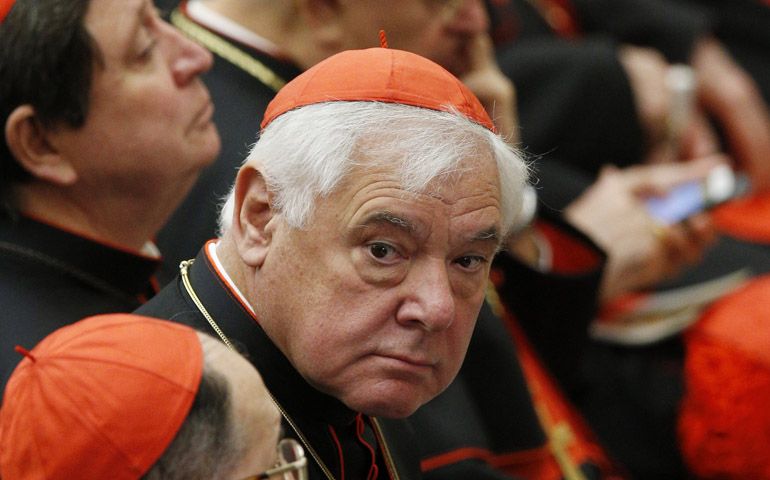 It is a great joy to witness Pope Francis' steadfast commitment to the poor, Congregation of the Doctrine of Faith Prefect Cardinal Gerhard Müller, told the German weekly Die Zeit in a lengthy, stocktaking interview on the state of the church in 2015.

"The pope's espousal of the poor and his unflinching adherence to the fact that theologically the periphery is not the margin but the center [of the church], and that the hope of humankind lies in Jesus Christ and not in the New York Stock Exchange warms my heart," Müller said.

Müller has co-authored a book on poverty with liberation theologian Gustavo Gutièrrez. The book was written because Müller is convinced that, rightly understood, liberation theology is a blessing for Latin America.

"That is why I greatly appreciate Gustavo Gutièrrez' life work -- and not because I want to score points in leftist-liberal circles," he said.

The interviewer said that Francis' critics have accused him of not appreciating doctrine sufficiently. Some of his critics had even called him a heretic.

"I assure them that they are wrong -- not only ex officio, but from personal experience," Müller said. "A heretic is a Catholic who obstinately denies a revealed truth that the church has declared to be true and that Catholics are obliged to believe."

Is it true that the CDF had received accusations of heresy against Francis?

The German cardinal was appointed to CDF by Pope Benedict XVI. What has changed under Pope Francis?

"Nothing," Müller said. "The two popes for whom I coordinate the work of the Congregation are different people. That enriches the church."

The CDF's job is to protect the faith against heresies or schismatic tendencies, Müller said but added, "We must also raise our voice against the inner secularization of the church."

Francis has his own style for sermons and pastoral approach, "both of which millions of people find most convincing. But he has again and again emphasized that everything he says and all his gestures must be interpreted within the framework of the Catholic creed," Müller said. "Jesus said God's salvific will is the way, even if it seems difficult. For us Catholics, but also for Protestant Christians, the Word of God is the truth and, as far as issues concerning the truth are concerned, there are no compromises. We are not God's negotiating partners."

Did the German language group at the synod last October, of which he had been a member, succeeded in reaching a compromise between the ideal of marriage and reality as it is lived today?

"That was not a compromise," Müller was quick to answer. "The essence of marriage remains the same, namely, when a man and a woman can say yes to one another, exclusively and forever. You cannot separate love and corporeality, faithfulness and sexuality. That is something worldly concepts of Christianity cannot change."

Müller was also asked if he and Cardinal Walter Kasper, who was also in the German language group, had serious differences of opinion on such topics.

"Cardinal Kasper and I are Catholic theologians who proceed from the fact of Divine Revelation. We are not politicians trying to reconcile conflicting interests," Müller replied. "Faith is not a party program that one can adjust to the will of the electorate. The church is not a philosophers' club trying to discern the truth. It is about the Spirit of God who has conserved the church for 2,000 years."

On a different subject, Müller said it is essential for Islamic scholars and politicians to make clear that violence is against the will of Allah.

Within Islam, there are sincere authorities who could be taken seriously and who believe that violence contradicts the core message of their faith, Müller observed.

"These Islamic scholars and politicians must unequivocally and bindingly demonstrate that violence is against the will of God. Fundamentalism is anti-Christian and immoral. Whoever hurts others in the name of God acts against God's will," Muller said. "That is valid for Judaism, Christianity and Islam. I am deliberately mentioning Islam as it considers Allah the Creator of all life and praises him as the All Merciful. Whoever believes in God the Merciful in the first sura of the Quran, can only interpret the suras that call for violence against infidels as a human interpretation of the Quran and not God's will."

He was very wary of using this argument in his talks with Muslim colleagues, Müller said, as he did not want to give them the impression of talking down to them and thereby suggesting that "we are enlightened but they have got stuck in the Middle Ages."

That could seem paternalistic and would therefore be counterproductive," he added.

Time to face facts: Pope Francis agrees with the doctrinal assessment of LCWR