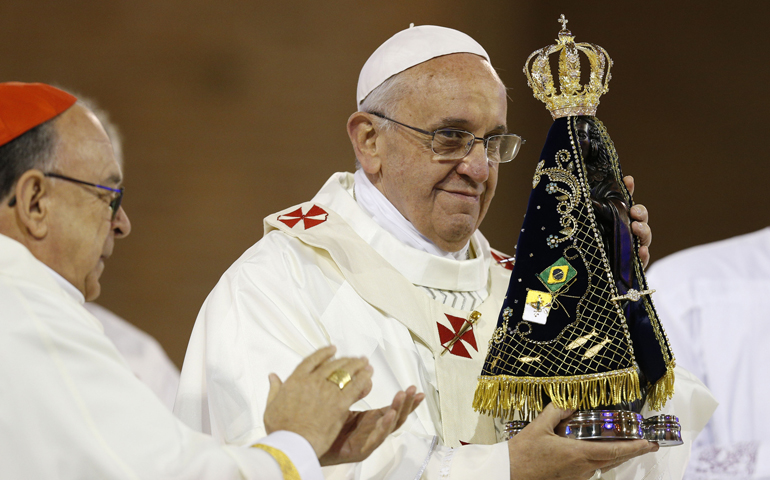 Shortly after his election, Francis celebrated a Mass at the Vatican's parish church of St. Anne, standing outside afterward to shake hands, give hugs and kiss babies. That display of ordinary pastoral concern quickly earned him the title of "the world's parish priest."

Today at Brazil's Marian shrine of Aparecida, Francis once again came off as a simple pastor -- albeit one now playing on the world's biggest religious stage.

This was not the swagger usually associated with John Paul II or the erudition of Benedict XVI. Instead, after a brief reflection on the 2007 meeting of Latin American bishops that took place at Aparecida, Francis devoted his brief homily to what he called "three simple attitudes" he'd like to pass on to participants in the July 23-28 World Youth Day.

Calling on Christians to be "lights of hope," Francis said it's important for believers to keep "a positive outlook on reality," conscious that despite the frustrations and "many idols" of the modern world, God always has "the upper hand."

Among those values, Francis said, are "spirituality, generosity, solidarity, perseverance, fraternity and joy" -- values, he said, "whose deepest root is the Christian faith."

Openness to being surprised by God

He cited the story of Aparecida itself, one of the world's largest pilgrimage centers and Marian shrines. Local tradition holds that three fishermen found a statue of Mary here in 1717 in the nearby Paraiba River. The image is colored black, according to the tradition, to stress Mary's love for the oppressed.

"Whoever would have thought," Francis said, "that the site of a failed fishing expedition would become the new place where all Brazilians can feel that they are children of one mother?"

At the opening of the Wednesday Mass, Cardinal Raymundo Damasceno Assis of Aparecida gave Francis a reproduction of the statue, calling it a reminder of God's love for the poor.

Francis invited believers to always be prepared for surprising ways in which "difficulty" and "sin" can be converted into "new friendship" with God.

"Christians are joyful; they are never gloomy," Francis said Wednesday, because they believe "God is at our side."

"Christians cannot be pessimists!" he insisted. "They do not look like someone in constant mourning."

The importance of staying upbeat has been a near-constant theme in the early stages of Francis' papacy. During a session with seminarians and religious novices in early July, for instance, the pope warned them not to be "too serious, too sad," because "there is no sadness in holiness."

Francis arrived Wednesday in Aparecida, which is located approximately 150 miles southwest of Rio, after traveling part of the way in an airplane and making the rest of the journey in a helicopter. He was originally scheduled to take a helicopter for the entire route, but inclement weather forced a change in plans.

Francis has a strong personal devotion to Mary, glimpsed among other things in the fact that he made a surprise stop at Rome's Basilica of St. Mary Major to entrust his Brazil trip to her protection Saturday night. Before the Wednesday Mass began, he stopped for several minutes of silent prayer before the image of Our Lady of Aparecida and seemed visibly moved.

Intermittent rain and record cold weather during the Brazilian winter may also have kept the crowd waiting for the pope at Aparecida smaller than it otherwise might have been, though officials estimated that around 200,000 people turned out. On the other hand, the rain and cold may have also helped keep the crowd more restrained than it was Monday night in Rio, when the pope's motorcade found itself virtually under siege from an enthused mob.

Francis made his way toward the basilica in a jeep mounted with a plexiglass covering, though no windows, while most people who turned out were wearing plastic ponchos or sporting umbrellas. As he usually does in Rome, Francis paused several times to kiss babies and to chat briefly with people in the crowd.

Jesuit Fr. Federico Lombardi said Tuesday night that after a meeting between Vatican officials and ministers of the Brazilian government, it had been decided that when the pope returns to Rio on Wednesday, he'll travel in a covered car rather than the open-air car. Lombardi said the decision was related to scheduling rather than security, though some observers connected the shift to the near-mob scene that unfolded around the papal motorcade Monday evening.

Lombardi said Francis will still use the open-air car for several other events during his itinerary.

When his Mass wraps up Wednesday, Francis will have lunch in Aparecida with the bishops of the region and seminarians. After his return to Rio de Janeiro, he's scheduled to visit a hospital run by Third Order Franciscans devoted to people recovering from alcohol and drug addiction.

On Thursday, Francis will bless the banner for the 2016 Olympic Games in Brazil and meet a delegation of athletes, including soccer legend Pelè, and will then visit one of Rio's favelas, or slums, in this case a zone that last year witnessed ferocious conflicts between police and drug cartels.

Thursday evening, Francis is scheduled to formally meet the pilgrims taking part in World Youth Day for the first time in a welcoming festival on Rio's Copacabana beach.