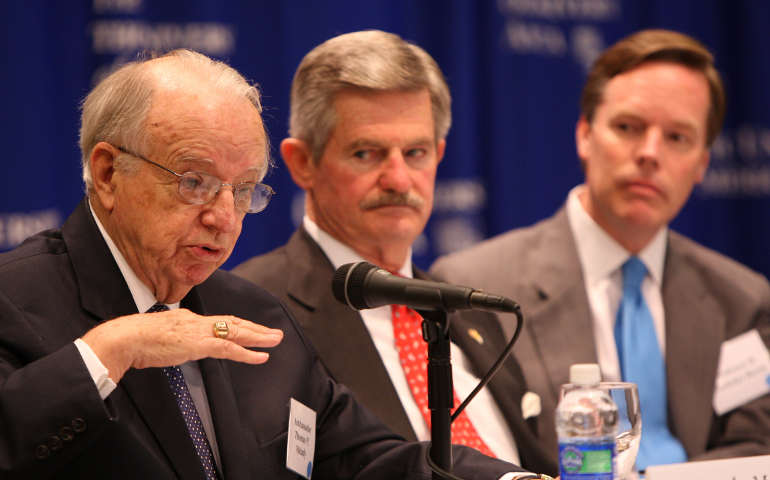 Thomas Melady gestures during a symposium at The Catholic University of America in Washington May 28, 2009. Looking on is Jim Nicholson, who also is a former U.S. ambassador to the Vatican, and Nicholas Burns, a former high ranking State Department official. (CNS file photo)

Thomas Patrick Melady, a former U.S. ambassador to Burundi, Uganda, and the Vatican and president of Sacred Heart University in Fairfield, Conn., died Jan. 6. He was 86.

Read more about him at the Institute of World Politics where he taught and was senior diplomat in residence.

Melady served in the administrations of three Republican presidents but he never liked partisanship. Always before his mind was what was good for the country, and good for the Catholic church. He was a great friend of NCR, telling me on a number of occasions that he had been a subscriber since our first issue. He even penned a few pieces for NCR. A sampling:

Signals from Rome: engagement and confrontation, Oct. 6, 2009
In a two-month period, Rome sent American Catholics two clear signals. One was on engagement -- the historic meeting of President Barack Obama with Pope Benedict XVI on July 10. The other signal was on the resignation of Scranton, Pa., Bishop Joseph F. Martino on Aug. 31.
For the past decade there has been considerable discussion centered around two words: engagement and confrontation.
These two words are at the heart of the question of how American Catholics respond in a pluralistic democracy to policies that run counter to Catholic teachings.

Politicizing Communion harms interests of the church, March 26, 2009
It was only a few decades ago that no one questioned a fellow Catholic’s decision either to receive or not to receive the Eucharist. This tradition has been slowly and regrettably compromised over the past 20 years. Holy Communion has become, in some circles, a political football. …
I’ve had some personal experience with those who question the motives instead of the ideas of their political opponents.
In the early stages of the 2008 presidential election, a few of us noticed the bitter tones being used by some Catholics to describe several prominent candidates. They were openly referred to as “baby killers.” A friend and I coauthored a statement on civility, which called on both sides of the partisan aisles to be frank, candid and forceful in their analysis of the candidates, emphasizing, however, that a respectful tone ought to be used in presenting their findings in the public square.
The statement was warmly greeted by many, though my wife Margaret (who authored a book on Pope John Paul II) and I were publicly informed by one rabid partisan that we were “damned to hell” for advocating civility in the discussion of these issues.

Requiescat in pace, Ambassador Melady. Yours is a voice that will be missed.