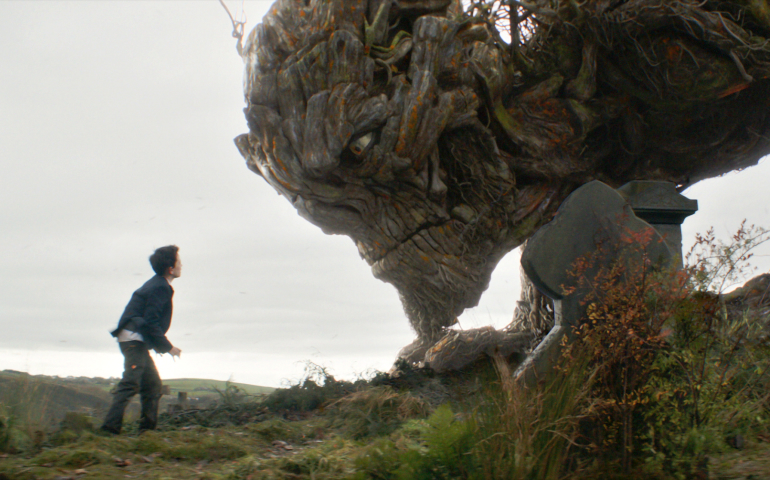 Conor, played by Lewis MacDougall, confronts the Monster, voiced by Liam Neeson, in the movie "A Monster Calls." (CNS/Focus Features)

"A Monster Calls" is the type of film that I would categorize as a "good cry." Other classic good cries include "Life Is Beautiful," "Precious," "The Fault in Our Stars" and "My Girl." While these films are sad, they are simultaneously inspiring and cathartic stories that offer an audience redemption and hope.

There is a difference between a good cry and a movie that is merely depressing. The distinction lies in the possibility for healing/redemption/conversion. Depressing films (bad cries) leave us resigned and hopeless. In a good cry, sadness is portrayed as part of our journey into newness and wholeness. For example, "Inside Out" showcased the necessity of sadness in a marvelous, inventive and age-appropriate way.

In "A Monster Calls," a boy named Conor (Lewis MacDougall) navigates a complex constellation of relationships with his bully, his grandmother, his father, his mother (Felicity Jones), and a benevolent therapeutic monster. These relationships all bleed into one another as he copes with mother's aggressive disease. "A Monster Calls" confronts typical fairy tales that end "happily ever after." As Conor's father (Toby Kebbell) explains, "Most of us just get messily ever after."

The Monster, voiced by Liam Neeson, is an animated arboreal creature that will remind viewers of Groot from "Guardians of the Galaxy" or Treebeard from "The Lord of the Rings." The Monster tells Conor three tales that give insight into divorce, disease and death. One story deals with a beloved prince who secretly gets away with murder. Another tale describes a pastor who demonizes a local apothecary, only to seek him out later in desperation. The Monster's stories are human, complicated, messy and heavy with paradox.

Visually, the stories are told via watercolor animation. Watercolor is a great device to tell these stories, because it is a messy medium for bleeding and blending rather than precision and defined lines. The pain and suffering of the stories bleeds and blends with hope and healing for young Conor.

"A Monster Calls" earns a place in the "good cry" canon. A "good cry" gives us a safe and indirect experience of suffering to enhance our empathy. "A Monster Calls" is a movie with a realistic emotional spectrum, which contains nary a curse word nor a moment of untoward sexuality. It is a child's tale of depth unlike traditional fairy tales.

The message of "A Monster Calls" is closer to biblical stories of salvation and redemption than to living "happily ever after."