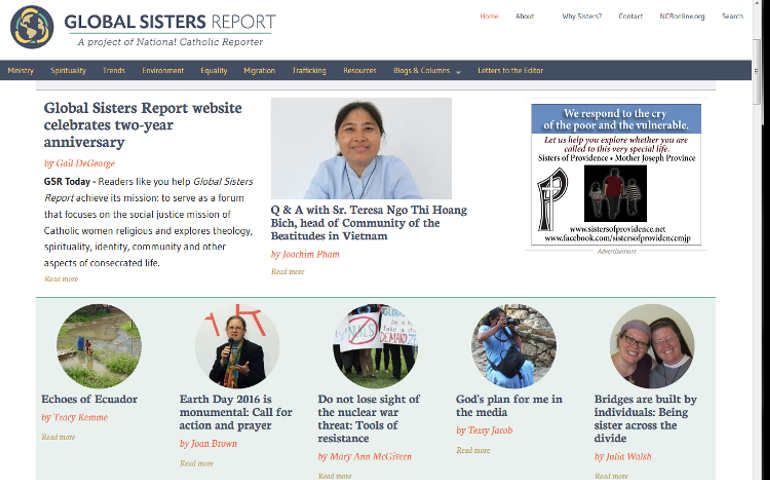 Today is the anniversary of the the launching of the Global Sister Report website, a reporting project of National Catholic Reporter made possible with a grant from the Conrad N. Hilton Foundation.

At one time, Pastor Eldrick Davis couldn’t preach without a portable oxygen tank. Last year, he lost more than 100 pounds with the support of his congregation and a Duke program to help pastors lose weight and improve their health. Weight loss is ministry's gain

A federal appeals court has ruled that a transgender boy in Virginia can sue his school board for discrimination because it banned him from using the boys' bathroom. Virginia Court Case Likely To Affect Other States

Republican presidential candidate Donald Trump sided on Thursday with those criticizing a controversial new North Carolina law requiring transgender people to use government and school bathrooms that correspond with the sex on their birth certificate. Trump said the law was unnecessary.

Young Voices column: My grandma, throughout her life and even after her death, taught me the significance of ritual. by April Gutierrez.

Interesting story about how non-Catholic, Christian denominations are trying to cope with sex abuse of minors: Abused? You Can’t Work at These Churches Church job seekers are being asked if they were sexually abused as children based on the false belief that victims will become abusers.

Tools of resistance: Do not lose sight of the nuclear war threat

Fascinating story about how local community deals with its past: Albany, N.Y., Catholic cemetery to be final resting place for 18th century slaves. Fourth graders at a local Catholic school helped design one of the burial boxes.

After 50 years, the Palestinian issue is still on a slow burn

Group of Catholic advisers signs on with Trump