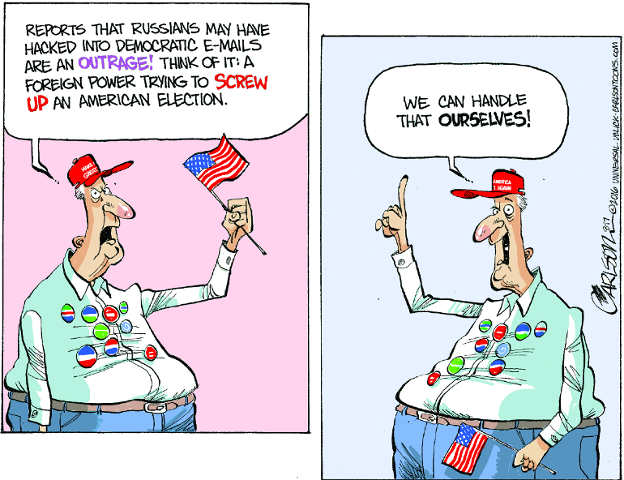 Editor's Note: Check out our new Friday Morning Briefing feature: cartoons! (see above) Comics to help you through Fridays with a chuckle or a groan.

Election 2016 -- Atheists give Hillary Clinton an 'A' on the issues; Donald Trump receives an 'F'

LCWR 2016: For this newbie, a mixture of emotions Global Sisters Report editor Gail DeGeorge reflects on her first annual meeting with the Leadership Conference of Women Religious

Baton Rouge Bishop: Flooding in Louisiana is “of historic proportions”

Carmel Mission, the common name for Mission San Carlos Borromeo del río Carmelo where St. Junipero Serra died in 1784, hosts its annual classic car rally and automobile blessing. Organizer says: "We are men of faith. But we are also men of cars."

There are ways to resolve conflicts over LGBT students at Christian colleges that will allow for both religious freedom and protections for LGBT students while minimizing further litigation. Keeping faith without hurting LGBT students

Before Pope Francis left Poland after attending the recent World Youth Day, he spoke to volunteers, especially young people, about what it will take for them to be the hope of the future. Perhaps to the surprise of the youngest of his listeners, he said that one key was memory. "A young person who cannot remember," the pope said, "is no hope for the future. Is that clear?"