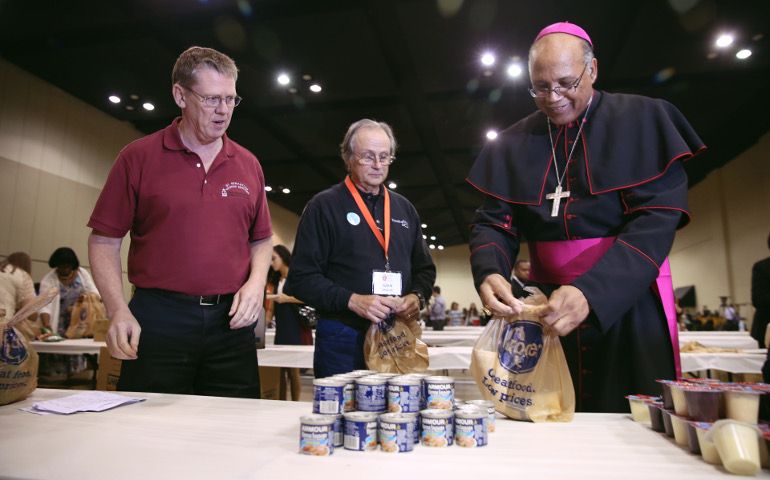 In one of his first acts as the new bishop of Memphis, Tenn., Bishop Martin Holley helps assemble bags of food for the homeless Oct. 21. He was installed Oct. 19. He was an auxiliary bishop in Washington, D.C., 2004-2016. (CNS/Jaclyn Lippelmann)

Election 2016: How the 'Trump Effect' and Clinton Cash Are Impacting Battle for Senate Control (Video and text.)

Election 2016: Why Donald Trump’s ‘Ballot Watchers’ Might Be Illegal

Reuters reports: Vatican and China in final push for elusive deal on the ordination of bishops

Israel's Defense Minister Avigdor Lieberman" Israel's next war with Gaza militants would be their last "because we will completely destroy them" HE also said that he does not want another war in Gaza and he remains committed to a two-state solution.

Vatican City -- Francis urges bishops to vet priests ahead of ordination "The Church and the world need mature and balanced priests, pastors who are intrepid and generous, capable of closeness, listening and mercy."

The 500th anniversary of the Reformation: Travel itinerary traces Martin Luther's life through these German destinations

Manila, the Philippines -- U.S. Assistant Secretary of State for East Asian and Pacific Affairs Daniel R. Russel arrived in Manila yesterday, aiming to make a sense of President Duterte’s recent anti-American statements particularly his declaration of an economic and military “separation” from its strongest Western ally.

Zimbabwe -- Nine years ago, Pius Ncube, then archbishop of Bulawayo, Zimbabwe, resigned when his affair with a married woman was exposed. He left the country for a short while, but returned and has been living quietly at a seminary. This is his first interview since stepping down.

Catholic theologians weigh in on protests, call for 'police reform and racial justice' in America

One bishop on health care reform