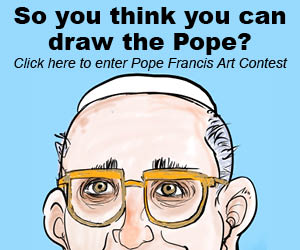 Have you entered Religion News Service's "Pope Francis Art Contest." Time is running out -- make sure you enter today.

Commentary from Down Under: Reshaping the Church with Bishop Robinson and Pope Francis

Evangelizing the institutional church: an interview with Helmut Schüller

NY Archbishop Dolan: Francis is, and isn't, what we expected

Philippines education secretary "strongly suggests" Muslim teachers not wear niqab (full face veil) in front of pupils. The ruling does not apply to the hijab - garments that cover the head only.

United Kingdom -- Is it time the Catholic Church got out of the marriage business?

EDITORIAL: Archdiocese of Detroit models how not to close a parish

Following the money from the White House

Why is locally grown and organic food so expensive?