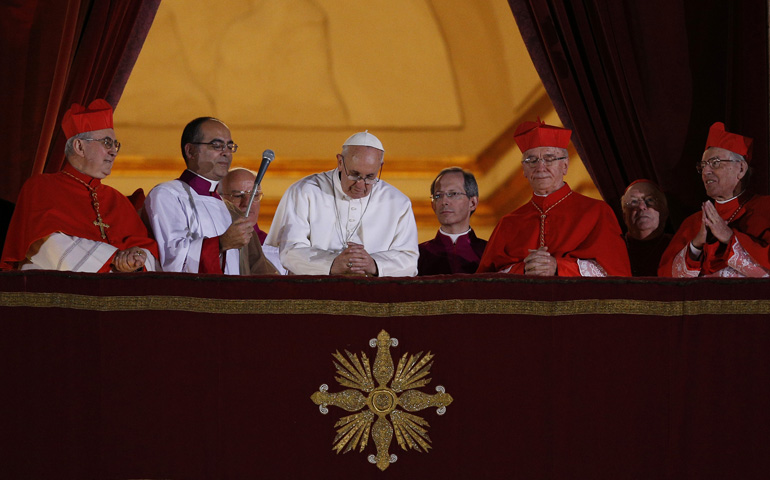 Pope Francis asks people to pray for him as he appears for the first time on the central balcony of St. Peter's Basilica on March 13 at the Vatican. (CNS/Paul Haring)

Thursday marks the 100th day since the election of Cardinal Jorge Mario Bergoglio as Pope Francis. This is a special edition of Morning Briefing examining Francis' first 100 days.

Opinion: How the 'Francis effect' could rescue the church by John Gehring, Catholic program director at Faith in Public Life

Preparing for the Pope by Marie Arana, a journalist and biographer of Simon Bolívar

Francis and the perils of an improv pope by John L. Allen Jr.

The paradox of Pope Francis by Hans Kung

Switzerland -- Things are happening behind the scenes by Olivier Pauchard, swissinfo.ch

Ireland -- Francis has changed the face of the papacy in his first 100 days by Michael Kelly, editor of The Irish Catholic

100 Days of Francis: Observations and predictions by John Carr in America magazine

See all of NCR's papal coverage at Pope Francis

Pope Francis invites boy with Down Syndrome for spin on popemobile