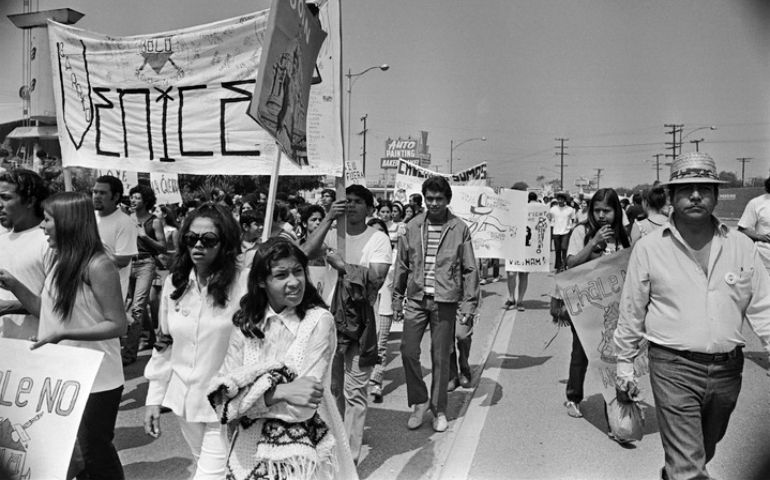 On this Memorial Day observance, I would like to share some concerns, indeed fear, over war. In the first place, while the nation's attention and that of the media has focused on the growing scandals within the Trump White House, not as much attention is being paid that Donald Trump may be getting the country once again involved in non-winnable wars in Afghanistan and in Syria.

In both cases, he is proposing and has possibly already ordered additional troops to supplement the continuing ones we have in Afghanistan due to the relentless Taliban insurgency. These additions are still ostensibly being send to train the Afghan military but will be more deeply embedded within the Afghan troops so that, for all practical purposes, these trainers will become combat troops. This will mean more casualties and the reappearance of a mindset to make this conflict once again an American war.

This didn't work under Presidents George W. Bush and Barack Obama and it will not work under Trump. Americans cannot fight someone else's war. It just does not work that way. Even though the U.S. might impose severe damage, in this case to the Taliban, we cannot remain there indefinitely and hence the causes for the civil war will remain. Only the people of Afghanistan on both sides can end this conflict.

In Syria, Trump will be sending U.S. troops into combat zones, although their mission is not clear. Here again, the American military cannot resolve the Syrian civil war. It may be one thing to combat the Islamic State group in both Syria and Iraq, which may be more defensible, but the use of the American military in a civil conflict again won't work and will only make matters worse, as we should have learned in Iraq.

This lesson of the limitations of American military power should have been learned years ago from the disastrous Vietnam War. This was a civil war that the U.S. should have never intervened in and, after years of fighting and the loss of 60,000 American lives plus countless more Vietnamese lives on both sides, the American military resolved nothing. We did not stem what the U.S. considered a communist war of aggression and the result was the first war in this country's history that we lost — an utter disaster.

The irony is that today we have full diplomatic and economic relations with "communist" Vietnam, including Kentucky Fried Chicken and McDonald's, and one wonders why 60,000 Americans had to die.

Perhaps we will be reminded of this disastrous war in Ken Burns' new documentary out this fall. The war was unnecessary and unjust on our side but many Americans paid a price for this mistake.

This included thousands of Latinos who were drafted into the military in disproportionate numbers to their population numbers. In the Southwest, where most Mexican-Americans lived then, they represented 10 percent of the total population and yet they represented 20 percent of the casualties from this region. Because many were in segregated and inferior schools, they did not have the opportunity to continue their education out of high school and that was the only way that young men could avoid the draft. Hence, the disproportionate numbers being drafted.

Yes, Chicanos and Latinos fought bravely and many won medals for their bravery. However, these contributions, even in a useless war, have not been well-acknowledged. I hope that Burns does a better job of showing this Latino contribution to the military than he did in his earlier documentary on World War II, where he completely excluded Latino contributions, even though perhaps as many as half a million Latinos, mostly Mexican-Americans and Puerto Ricans, served in the "good war" and should be considered as part of the greatest generation.

By the same token, I hope that Burns shows how Chicanos on the home front, as part of the Chicano movement of the late 1960s and early 1970s, organized the largest anti-war protest movement against U.S. intervention in Vietnam. Anti-war protesters pointed out the unjust drafting of Chicanos as cannon fodder for the war as well as the sharp cutback in anti-poverty and educational funding in order to pay for the war.

The historic Chicano anti-war movement was highlighted on Aug. 29, 1970, when perhaps as many as 20,000 Chicanos marched against the war in East Los Angeles. It was the largest anti-war demonstration by any minority group in the country. I hope Burns has done his research and shows how the Vietnam War affected Latinos and how they were part of making the history of this period.

We don't need more wars and military excursions such as the Vietnam War or in the Muslim world. We can play a role, especially against terrorist threats, but we cannot be the policeman of the world and I had hoped we had learned that lesson. Apparently, Trump, who has little or no historical consciousness, has not.

But just as in the case of the Vietnam War, it will be up to the American people to rise up as that generation did then and to put their bodies on the streets and demand that such unnecessary and unjust military conflict cease and that we will not suffer the unnecessary loss of more of our young men. Basta! Enough!

We cannot fight other people's wars