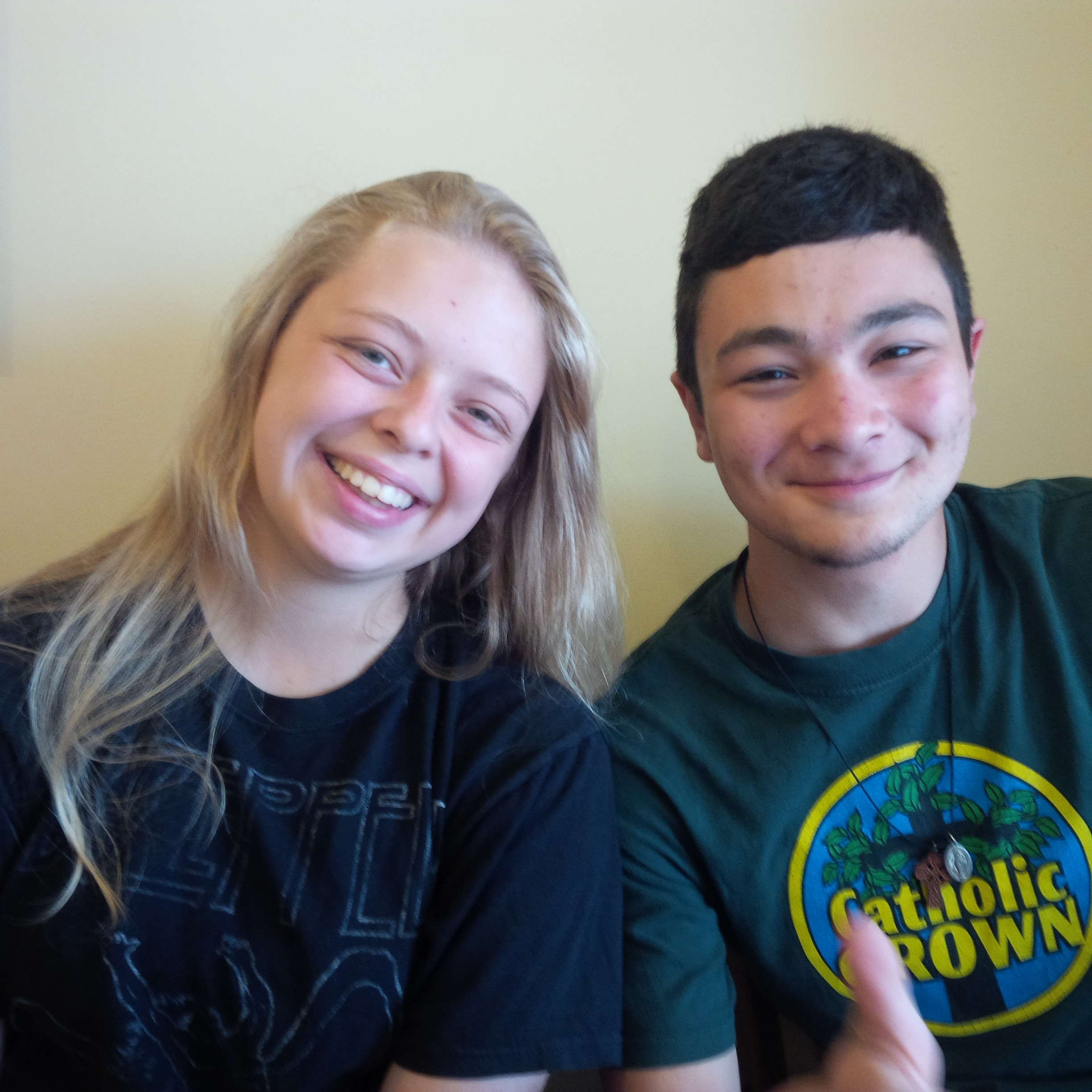 Marisa Ramos, 17, of Anchorage, Alaska, and Daniel Piscoya, 18, of Fairbanks

The story of how they got here by itself illustrates why some World Youth Day veterans like to refer to the event as a "mosaic of miracles."

On the papal plane Monday en route to Brazil, Francis made passing reference to the fact that the global economic crisis has made life especially tough for young people. The pope was thinking largely of the difficulty of finding a job, but these Alaskans felt its bite in another way.

Just around a month ago, in late June, they learned that the approximately $4,000 each of them had put up to attend the Rio de Janeiro World Youth Day, amounting to $180,000 in total, had disappeared.

The travel agency the Alaskan delegation was using had declared bankruptcy, so their payments for airfare, lodging and other costs were all lost.

Marisa Ramos, 17, of Anchorage, illustrates how most of the would-be pilgrims had come up with the money.

For the last year, Ramos said she worked 45 hours a week at a local burger joint called the Arctic Roadrunner ("Best burger in Anchorage," she insists) and washed dishes at fundraising dinners in her parish, putting those earnings aside to find the voyage to Rio.

She's the sort of young Catholic for whom that kind of sacrifice seems natural. For instance, she says when a new pope was elected in March, she and her friends alerted one another by shouting in the hallways of their school, "White smoke, dude, white smoke!"

Daniel Piscoya, 18, of Fairbanks illustrates another way things sometimes come together. He had always wanted to go a World Youth Day, he told NCR on Tuesday morning, but decided Rio was out of reach. Then someone in his parish offered to cover the trip on the understanding that he'll eventually pay back half.

He took the deal and signed on.

Obviously, Ramos didn't have another two years to earn back her losses, and neither could Piscoya count on another benefactor materializing out of nowhere. Both, therefore, faced the very real prospect as recently as the end of June that Rio might not happen.

"If we were ever going to have any credibility when we talk about how much we support our kids, we knew this was the time we had to show it," said Bishop Edward Burns of Juneau.

To put it mildly, Alaska's not exactly a thriving crossroads of Catholic culture -- there are only about 65,000 faithful in the whole state, which elsewhere might be a largish parish, and just three bishops. In addition to Burns, they're Archbishop Roger Schwietz of Anchorage and Bishop Donald Kettler of Fairbanks.

The three sat down with NCR on Tuesday morning in the modest Rio hotel on the Copacabana beach where the Alaskans are staying and told the story. The bishops said they faced three options:

They made an immediate decision to do with the third option, they said, and committed themselves to making it happen. (Kettler acknowledged Burns and Schwietz carried most of the load, since a recent flood in Fairbanks that wiped out a whole village, including a Catholic church, is consuming much of his energy.)

All three credited Alaska's World Youth Day coordinator, Bob McMorrow, with handling the logistics. The bishops put word out that they needed help, issuing a joint letter read out at all the state's parishes at the end of June and taking up a special collection to support the WYD pilgrims.

In the end, they said, the response was overwhelming. Burns says one wealthy couple from out of state happened to be vacationing in Juneau the weekend the letter was presented and immediately offered a check for $10,000.

To some extent, the "Francis effect" also may be in the mix. Schwietz said a restaurant owner who heard about the situation on the local TV news came up and said he's not Catholic but really likes the new pope, offering a contribution of $150.

In the end, the bishops said, roughly 400 people made donations, covering about $100,000 of the lost money, enough to make the trip feasible. They're committed to eventually raising the rest.

The bishops are carrying a list of the donors with them in Rio, placing it on the altar whenever they worship as an expression of gratitude.

There's no doubt the Alaskan pilgrims appreciate the effort. When the three bishops walked into a room this morning for a prayer service with their delegation, the youth erupted with whoops and cheers.

Granted, a World Youth Day tends to attract the kind of gung-ho young Catholic for whom applauding anybody in a Roman collar and pectoral cross is almost instinctive, but this was more than a pro forma display of enthusiasm.

Both Ramos and Piscoya said they would have come to Rio no matter who the pope was, but both also said they're especially excited to share the experience with Francis.

"There's a tradition at World Youth Day that you shout out the name of the pope," she said, "but we've been told he doesn't want that done with him. He stopped it in St. Peter's in Rome. I think that attests to his character."

Piscoya said he'd read on a Catholic blog that while John Paul II exemplified the virtue of hope and Benedict XVI faith, Francis is more about love.

"Because of that, he's going to be as great as his predecessors, if not greater," he said.

Given everything they've been through the last month, however, and how close they came to not being here, the ecclesiastical potentates they seem most fired up about at the moment are their own shepherds.

As Piscoya put it, "We're here through the providence of God and the awesomeness of our bishops!"