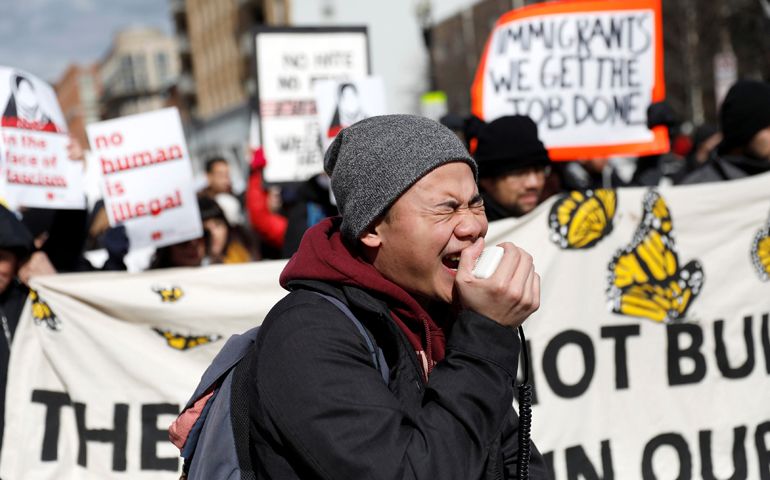 A demonstrator yells into a loudspeaker during the "Day Without Immigrants" protest Feb. 16 in Washington. (CNS/Aaron P. Bernstein, Reuters)

Immigration and Customs Enforcement, known as ICE, has stepped up its arrests and deportations of undocumented immigrants as ordered by President Trump. Individual agents have also become more aggressive in their treatment of visitors at the borders.

Six men were arrested on Feb. 8 as they were leaving a shelter at the Rising Hope Mission Church in Alexandria, Va. So the pastor and other leaders and immigrants called a prayer vigil and press conference on Friday, Feb. 17 in front of the nearby ICE field office. They called on ICE to refrain from making arrests at sensitive locations such as schools and churches.

In recent years ICE has not entered schools or churches or camped outside them to arrest those arriving or departing. The people gathered were asking ICE to continue to respect those locations.

At my first reading of the press release, I assumed it was a big Washington, D.C., action. But at an ICE field office? The speakers were the pastor, a released detainee, and the board president of a local immigration group. This was not a big D.C. action.

Anybody can do this! It's a model, a way for us to resist locally.

But what if you give a press conference and nobody comes? Well, it's a local issue. Probably somebody will come. But if they don't, no harm in gathering in front of an ICE field office to pray. Prayer might even be more effective than the press conference.

Here's a copy of the press release in case you want a little guidance.

TOMORROW: FAITH LEADERS TO HOLD PRESS CONFERENCE AND PRAYER VIGIL CALLING ON ICE TO KEEP AWAY FROM PLACES OF WORSHIP AND STOP THE RAIDS

FAIRFAX -- ICE officials apprehended six men exiting a hypothermia shelter on February 8 at Rising Hope Mission Church in Alexandria, Virginia -- violating ICE's own policy to not conduct enforcement actions at or near "sensitive locations" like houses of worship. Faith leaders, community members and immigrants will join together in a prayer vigil and press conference Friday, February 17 at 8:30 AM in front of the ICE Field Office in Fairfax County, Virginia to decry these actions and urge for an immediate end to the raids.

Immigration and Customs Enforcement (ICE) is implementing President Trump's recent executive orders to increase immigration enforcement by targeting all undocumented immigrants, including a Methodist lay leader in Kansas, a mother in Arizona, and now, men coming out of a church ministry that provides shelter in extremely cold conditions. As ICE continues these egregious actions, people fear seeking services like shelter they desperately need to survive, and community leaders are reporting that people are afraid to go to school, hospitals and places of worship.

Faith leaders stand united in their opposition of inhumane and unjust immigration raids and call on ICE to respect places of worship, schools and hospitals by not apprehending people in or near these sensitive locations. Faith communities have demonstrated unwavering commitment to our immigrant neighbors, including more than 800 congregations that have pledged support for the Sanctuary Movement. Earlier today, CWS issued an action alert urging members and supporters to call ICE, Congress, and the White House and tell them to stop the raids and respect places of worship.

WHAT: Press Conference and Prayer Vigil

Oscar Orlando Ramirez, individual who was picked up by ICE during this operation and later released

Justice | One way to stand with undocumented immigrants