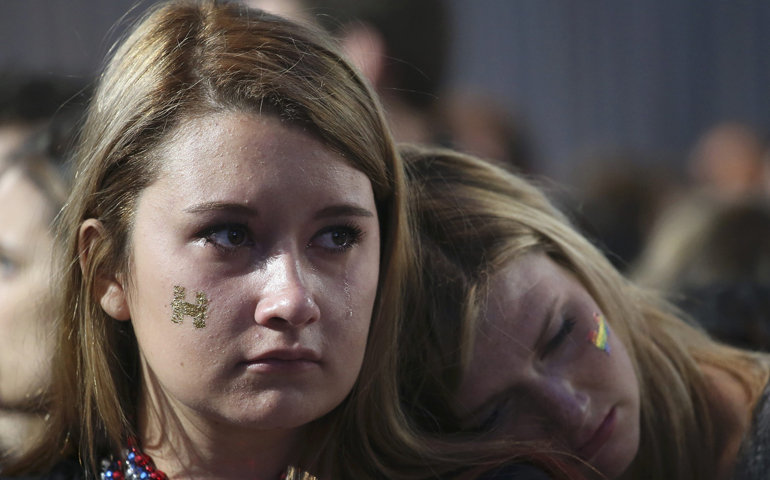 A supporter of Hillary Clinton reacts to the news that Donald Trump won the election in the early morning hours of Nov. 9. (CNS/Adrees Latif, Reuters)

How do you begin a letter when you are angry, astonished and full of shame? I can only speak plainly to you. Now isn't a time to go silent or tiptoe around the sharp edges. My hope is you will hear my pain and rage, and that I have a big enough heart to listen to you. It feels like a vast chasm spreads out between us, an expanse so wide no physical bridge could bring us together. But to accept this is to be complicit in despair, a poison that paralyzes — the opiate of the cynic.

We Christians can't linger for long in that dark alley.

As a white Christian, I'm disgusted that so many in my family of faith played a key role in electing a bully who boasts about sexual assault, defines all Muslims by the actions of an extreme few, called Pope Francis "disgraceful" and mocked a disabled reporter. A white nationalist is now the chief strategist to the president of the United States. Whether you think the person you elected is racist or sexist doesn't really matter. Trump's campaign of demagoguery and fear mongering didn't create bigotry and hate, but he stoked the darkest impulses of people in ways both skillful and frightening. The "Trump effect," as some observers are calling it, is tangible. The FBI reports that attacks against American Muslims soared last year, and spiked in just the last week after his election. The Southern Poverty Law Center and news organizations have tracked dozens of verbal and physical assaults on minorities. Is this what it means to "Make America Great Again"?

I don't personally blame you for these assaults on human dignity, but as Christians who supported Trump you have a particular obligation to see with clear eyes the toxic venom his election has unleashed. As history teaches us, if you don't speak out, you're complicit in the horrors that inevitably follow silence. Many of you are good people. You love your kids, work hard, serve your country. This isn't about politics as usual. I don't question your vote for a Republican. My question is about Jesus. If we're reading the same book, I see a brown-skinned man, born under the yoke of empire, scandalizing the elite of his time by eating with foreigners, sitting down with prostitutes, reminding the wealthy and the powerful that the poor have a better shot at reaching paradise. The migrants are welcomed. The mocked are given the best seat at the party. The mighty are made low. Is this the kind of world our president-elect envisions?

I'm not letting myself off the hook. I can't simply point a finger without searching my own soul.

I'm a progressive who cheers Rachel Maddow and sneers at Bill O'Reilly. I live in an affluent, diverse, urban area where pickup trucks are as rare as Trump signs. I live in a bubble, an echo chamber where my own ideas get reinforced. We may have that in common at least. Trump's election came as a shock, a jolt to everything I know. Perhaps I haven't visited your towns and neighborhoods enough. I haven't talked to a middle-age man with calloused hands whose factory job is gone, and is desperate for someone, anyone, to shake things up. Perhaps I'm not listening enough to those of you who feel like your traditional views on marriage and sexuality are disparaged by secular liberals. Pope Francis talks about those who are excluded. Many of you must feel a sense of cultural and economic exclusion I have not tried hard enough to understand. The only answer for this is encounter, the pope tells us, meeting each other. Caricatures are easy to paint on social media. But I know you're more complex.

Honestly, I'm not sure where we go from here. I'm still angry and astonished. I lose sleep thinking that my two young children will grow up in a world where the air is more polluted, political discourse gets even more coarse, and the most vulnerable are targeted by the most powerful. I want reconciliation and dialogue, but never at the expense of justice for those facing real threats. If Donald Trump creates a registry for Muslims, I will register. All Christians who believe in religious liberty should.

Even as I speak up for what I believe in and what I think this country stands for I'm also going to try and lower my voice. I'm going to listen to you. We should meet. The words between us will not be easy. Let's keep faith and stumble ahead together through the fog.