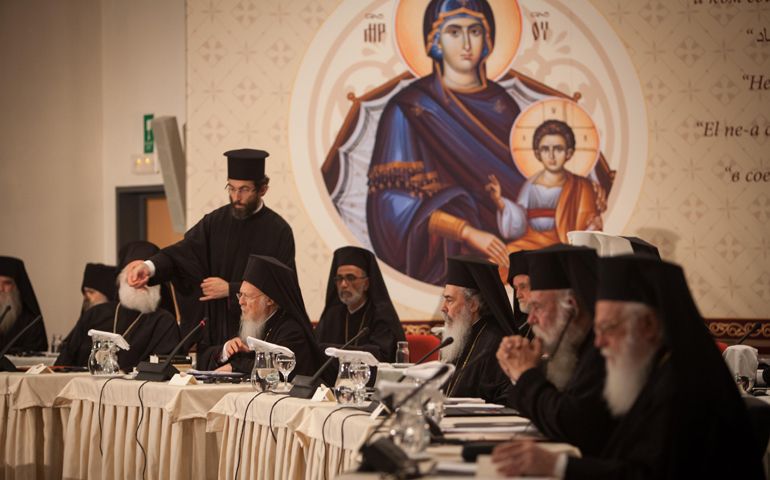 Patriarchs attend the opening session of Great and Holy Council of the Orthodox Church in Chania on the Greek island of Crete June 20. (CNS/Sean Hawkey, handout)
This article appears in the Pan-Orthodox Council feature series. View the full series.

A historic gathering of Orthodox leaders has opened in Crete with a pledge by its convenor to "bring truth, genuineness and hope" to the world, despite recent inter-church tensions and disputes.

"Each Orthodox church and every faithful Orthodox Christian are joined to one body, each with his own gifts -- we should not look to others with suspicion or anger, but rejoice as if they were our own," said Ecumenical Patriarch Bartholomew I of Constantinople, honorary leader of world Orthodoxy.

"A very large number of errors are circulating, especially in our time, and the arguments used by the deceivers are particularly sophisticated. This means a coordinated effort is required by shepherds of the Orthodox church to inform the faithful -- the religious factions attempting to lead the Orthodox faithful astray are numbered in the hundreds."

The 76-year-old patriarch was preaching on Sunday, the Orthodox Pentecost, at a divine liturgy in the Cathedral of St. Minas in Heraklion, at the start of the Holy and Great Council, attended by 170 bishops and metropolitans from 10 separate Orthodox churches.

He said the world's 300 million Orthodox Christians were "united in faith and sacraments," although each church had "its own treasure" though its distinct history and patrimony.

He added that church leaders also had their own "different opinions" and faced "personal weakness and unworthiness," but were called to "deliver the human race from manifold suffering" and give the world "a message of truth, genuineness and hope."

"It is not enough when this remains on a theoretical level -- it requires a response on the practical level, where we are unfortunately greatly lacking," the patriarch said at the service, which was also attended by Greek president Prokopis Pavlopoulos and other government officials. "As leaders of the church, we are obliged to provide a good example and embrace the entirety of the truth we have received, because our opponent tries to scatter misguided ideas in our hearts which negate the truth of our faith."

Plans for the week-long Council, widely believed the first on such a scale for more than a thousand years, were finalized by Orthodox leaders in January around a five-point agenda covering mission, diaspora affairs, church autonomy, fasting, marriage and ties with other Christian churches.

However, final preparations were overshadowed by the withdrawal of the Antioch Patriarchate and Orthodox churches in Georgia, Bulgaria and Russia, citing disagreements over the Council's procedures and working documents.

Patriarch Kirill of Russia, whose church represents around half of all Orthodox Christians, told Council participants in a June 17 message the latest "fully revealed" differences should not be allowed to "grow into an inter-church conflict" or "bring division and trouble." He added that churches had "made their decisions in good conscience" about whether to attend the Crete gathering, and cautioned that the absence of the four also meant "we have not reached pan-Orthodox consensus."

However, spokesmen for the Ecumenical Patriarchate accused the Russian Orthodox church of violating previous agreements, and said absent churches "should have no influence" on the Council deliberations nor "invalidate" its proceedings.

"Further delays should not intimidate the overwhelming majority of Orthodox leaders that wish to carry out the commitment to have the Council on this year's Feast of Pentecost," Archdeacon of the Ecumenical Throne of Constantinople* John Chryssavgis and Fr. Paul Gavrilyuk, from the Patriarchate's press office, wrote in First Things.

"The official position of all local churches is that the Holy and Great Council is desirable. Those who sabotage the Council today are letting petty squabbles and impulses towards ethnic self-isolation prevail over walking together towards unity."

June 20 speeches and proceedings were live-streamed on the official Council website from the Orthodox Academy in Kolymbari, where the Catholic church is being represented as an observer by Cardinal Kurt Koch, chairman of the Vatican's Pontifical Council for Promoting Christian Unity, alongside observers from the World Council of Churches and non-Orthodox denominations.

In a June 19 noon prayer in Rome's St. Peter's Square, Pope Francis told Catholics he hoped the Council would achieve a "successful outcome."

Church leaders present in Crete appealed during a June 17 meeting, or "Small Synaxis," for absent churches to "reconsider their decision" and attend the Council. In a June 20 commentary, Russia's Interfax news agency said the Russian church's withdrawal meant the Council would "represent a minority of the episcopate, clergy and Orthodox world of believers," and could not be considered "a Pan-Orthodox Council."

Speaking over the weekend in Heraklion's Church of St. Titus, Patriarch Bartholomew said the Council was tasked to "decide together on a synodal level about the problems and issues plaguing local churches and their interrelations" at a time of "violent and disruptive changes in all areas of life."

"This materialistic spirit has selfishly reigned and still reigns, while the Christian spirit and spiritual values have been pushed aside," he continued. "Persons have turned to numbers and have been treated as biological units. The personal relationship of man to God has been ignored, feelings of brotherhood weakened between the faithful, the traditional spirit of co-operation crippled, and now everything revolves around a secularism that is fleeting, passing and devoid of perspective."

*This story was updated to correct John Chryssavgis' title.