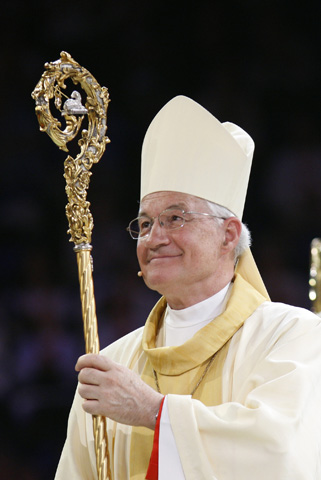 As veteran Vatican writer Andrea Tornielli reminds readers today in La Stampa, one way to judge how serious a papal candidate may be is by how much whispering, rumor and character assassination that person generates. By that standard alone, one probably ought to take Cardinal Marc Ouellet seriously indeed.

The 68-year-old Ouellet, a native of Quebec who currently heads the Vatican's all-important Congregation for Bishops, has long been considered a formidable contender to take over the church's top job. He's got the brains, the languages and the life experience to satisfy the conventional wisdom about what it takes to be pope.

As recent days have shown, he's also got the baggage any public figure accumulates over a long and controversial career.

Profiles in the Canadian press have been mixed -- Toronto's Globe and Mail on Saturday was typical, asking, "Can the Cardinal who couldn't save his Quebec church save the Vatican?"

The gist was that Ouellet's tenure as archbishop of Quebec from 2002 to 2010 was rocky, and there's little indication he turned around the steep decline in faith and practice in Francophone Canada. (One profile pointed out that even some of his siblings are no longer practicing.)

Reporters have also resurrected moments of controversy in Quebec, such as wide blowback to a 2010 comment from Ouellet that abortion is unjustified even in cases of rape.

Here in Rome, observers have recalled that Ouellet is sometimes given to emotion, tearing up in delicate moments, with the not-so-subtle suggestion that perhaps he lacks the steel to lead. Others have recalled an embarrassing episode from 2003, when Ouellet's younger brother Paul, an artist and retired teacher, pled guilty to sexual offenses against two teenage girls. Marc Ouellet has never spoken publicly about the incident.

At the very least, should Ouellet emerge from the pending conclave as pope, no one will be able to say the cardinals didn't have enough background to make an educated judgment about what they're getting.

First of all, he's a genuine intellectual who could approximate the broad culture and theological acuity of Benedict XVI, and Ouellet is very much cut from the same cloth as the pope in terms of basic outlook. Like Cardinal Angelo Scola of Milan, Ouellet has longstanding ties to the circles around the journal Communio co-founded by the young Joseph Ratzinger.

Second, many cardinals would like a pope who can somehow bring the First World and the Third World together, and Ouellet could fit the bill. He's a polyglot, speaking six languages (English, French, Spanish, Portuguese, Italian and German), and as a young priest he spent time teaching in Colombia during the 1970s and '80s. He's traveled widely, giving him a sense of the very different realities facing the church in various parts of the world.

Third, there are also many cardinals who want a pope who can launch a serious reform of the Roman Curia, implying a need for somebody who knows where the bodies are buried. Ouellet's résumé seems attractive on that score, too. He was a consulter at the Congregation for Clergy from 1995 to 2000 and put in a brief stint as secretary of the Pontifical Council for Promoting Christian Unity from 2001 to 2002 before returning to the Vatican in 2010 to take over the Congregation for Bishops. Those posts have afforded Ouellet insight into how the Vatican works -- and, sometimes, how it doesn't.

Fourth, Ouellet is universally seen as a deeply spiritual man with a keen prayer life, making him credible when he talks about the core components of Christian belief. Assuming the cardinals will be looking for personal holiness above all in the next pope, some believe that alone ought to put Ouellet near the top of the list.

Fifth, as a Canadian, Ouellet would represent a break from the European stranglehold on the papacy. Although the New World may not seem so "new" anymore to everyone else, this is the Vatican we're talking about, where they think in centuries. In that sense, a vote for Ouellet might attract some cardinals as a vote for broadening the horizons of the church.

If nothing else, Ouellet isn't an Italian, and some cardinals from other parts of the world believe the Vatican's management snafus under Cardinal Tarcisio Bertone, the Secretary of State, have damaged the prospects of an Italian candidate.

Sixth, having served in North America at the peak of the sexual abuse scandals, Ouellet grasps the massive blow they've caused to the church's moral authority. In Rome, he's seen as among the reformers; during an international summit on the abuse crisis last February, he led a liturgy of repentance in a Roman church in which victims participated. Ouellet called the crisis "a source of great shame and enormous scandal" and said sexual abuse is not only a "crime" but also an "authentic experience of death for the innocent victims."

(Critics, however, charge that Ouellet has not used his Vatican position to press for greater accountability for bishops who covered up reports of abuse.)

The rap against Ouellet lays out this way:

First, some Vatican-watchers like to quip that he would basically be a "photocopy" of Benedict XVI -- another cerebral pontiff who prefers the life of the mind to the nuts and bolts of administration and who is perhaps too gentle, too nice, to really crack heads and bring the institution under control.

On a related note, Ouellet has repeatedly talked about the crushing burdens of the papacy, calling the job a "nightmare" in 2011. Some may wonder if he would be up to the magnitude of the task. That might be a special concern in the wake of a pope who was himself acutely sensitive to the demands of the position and who resigned because he said he no longer has the strength for it.

Second, the mere fact that Ouellet has Vatican experience doesn't necessarily mean he's the right guy to execute reform. Many cardinals in 2005 thought Joseph Ratzinger would be that man because of his 20-plus years in the Vatican, yet at least some would say today it never really happened.

Third, despite Ouellet's time in Latin America and his robust capacity for languages, he tends to be focused on the struggle against Western secularism, again much like Benedict XVI. Some cardinals from the developing world, where two-thirds of all Catholics today live, may wonder if he'd be equally energetic on the concerns that tend to loom larger for them -- relations with Islam, for instance, or the struggle to defend persecuted Christians in hot spots such as Syria, India and China.

Fourth, Ouellet is a Sulpician, and in some circles the Sulpicians are associated with liberalizing currents following the Second Vatican Council (1962-65), blamed by some conservatives for drop-offs in vocations and a loss of faith. Although no one faults Ouellet personally, some traditionally minded cardinals might wonder what impact he would have on the church if he couldn't leaven the culture within his own order.

Fifth, some cardinals believe the next pope has to be a missionary-in-chief, an effective front man for the new evangelization, putting a compelling face and voice on the Catholic message. Some may wonder if Ouellet is truly cut out for that role, a man who can be warm and witty in private settings but sometimes comes off as a bit stiff and withdrawn on the public stage.

Of course, no one human being could every perfectly capture everything the cardinals might want when they go shopping for a pope: a living saint, an intellectual giant, a political heavyweight, a Fortune 500 CEO, and a media darling who turns the world on with his smile. Inevitably, they'll have to make compromises, looking for someone who comes close enough on several of those measures to seem a credible candidate.

It's impossible to say whether Marc Ouellet will be the answer the cardinals come up with when they start doing the math, but given both his résumé and his personality, it's hard to imagine he won't be in the equation.