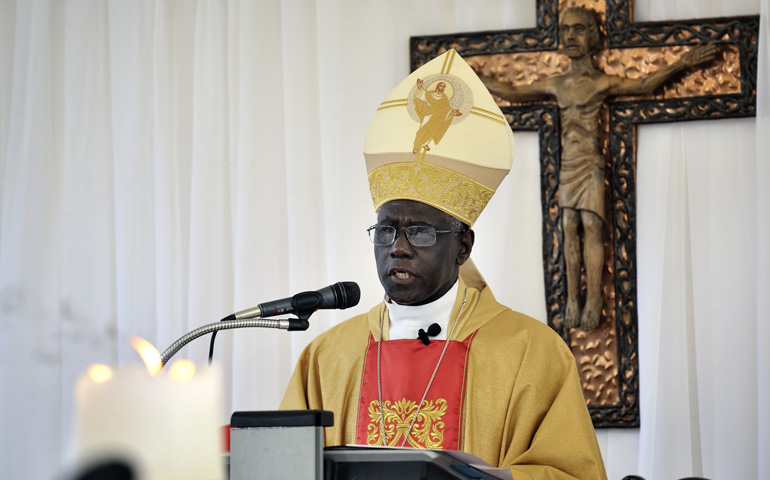 Cardinal Robert Sarah, president of the Pontifical Council Cor Unum, gives the homily during a Mass in Port-au-Prince in 2011. (CNS/Paul Jeffrey)

Yesterday, we challenged conventional wisdom by suggesting there's another cardinal who might stand as good a chance as Luis Antonio Tagle of Manila to be the first Asian pope, in Malcolm Ranjith of Sri Lanka. Today, we'll give Africa the same treatment, because in addition to Peter Turkson of Ghana, there's another African currently working in Rome who might strike some cardinals as an equally compelling choice.

Insiders will tell you that Cardinal Robert Sarah of Guinea, President of "Cor Unum," the Vatican's charitable agency, could be a strong runner to become the first African pope since Gelasius I in 492.

We're talking about a man with far more Roman seasoning than Turkson, since Sarah studied at the Gregorian University in the 1960s and has worked in the Vatican since 2001 in positions considered more consequential. He's also got plenty of pastoral experience as the archbishop of Conakry in Guinea for 22 years, and he speaks French, English and Italian comfortably.

Sarah is seen as fairly conservative and fairly low-profile, a man who doesn't court media attention and who, perhaps as a result, has no track record of controversial or potentially embarrassing utterances. Moreover, he's also seen as an effective behind-the-scenes player, who recently prevailed in a standoff over the Rome-based charitable federation Caritas Internationalis.

Add all that up, and it's not hard to see why Vatican-watchers take Sarah seriously, perhaps not as a front-runner, but someone who could be waiting in the wings.

As a bonus feature, Sarah is 67, right in the wheelhouse of what many cardinals believe to be right age for a papacy that's neither too long nor too short.

Sarah was born in 1945 in what was then known as French Guinea, and entered the seminary in Ivory Coast. He returned in 1960 to continue his studies at home, but after a year the Marxist-inspired Democratic Party of Guinea nationalized all Catholic schools, including the seminary, and Sarah and his fellow candidates for the priesthood had to regroup. He eventually finished his undergraduate studies in Senegal, then headed for Rome to the Gregorian, followed by a stint at the Studium Biblicum Franciscanum in Jerusalem.

After just 10 years as a priest, Sarah was named the archbishop of Conakry in 1979, when he was barely 34 years old.

(As a footnote, Sarah was consecrated as a bishop by none other than Cardinal Giovanni Benelli, who served as the nuncio to Western Africa from 1966 to 1967 and got to know the promising young Guinean priest. Benelli went on to become the über-powerful substitute under Paul VI, earning nicknames such as "the Berlin Wall" and the "Vatican Kissinger." Lots of people still remember Benelli's tenure as the golden years of the Secretariat of State, when the trains really ran on time, and Sarah's connection might give him a boost with cardinals old enough to remember -- including, for instance, Giovanni Battista Re of Italy and Justin Rigali of the United States, both of whom worked under the famed substitute and came to be known as "Benelli's widows.")

In 1985, Sarah was elected president of the bishops' conference of Guinea, and became the primary interlocutor with the government in the chaotic period after the death of the Marxist dictator Ahmed Sékou Touré in 1984.

Sarah became an outspoken critic of authoritarian and corrupt regimes. When Pope John Paul II visited Guinea in 1992, Sarah publicly asked the pope to push African leaders to clean up their act.

"Tell the African governments that reforms will be meaningless if they are tainted in blood, provoking considerable human and economic catastrophes," Sarah told the pope.

When the ruling regime in Guinea tossed opposition leader Alpha Conde into jail in 1999 after a disputed election, Sarah publicly demanded his release.

While still in Conakry, Sarah was also elected president of the Episcopal Conference of West Africa, another sign that his fellow bishops saw him as a leader.

In October 2001, Sarah was called to Rome to become the secretary, or number two official, at the powerful Congregation for the Evangelization of Peoples (better known as "Propaganda Fidei.") In that role, he became seen as a go-to figure inside the Vatican for bishops from all over the developing world.

Nine years later Sarah was tapped to take over at Cor Unum from German Cardinal Paul Cordes, symbolically expressing a transition in leadership of the church's charitable enterprise from the first world to the developing world.

On what Americans know as the "culture wars," meaning debates over abortion, homosexuality and the family, there's no doubt Sarah profiles as a staunch conservative.

During the 2009 Synod for Africa, he condemned a Western "theory of gender" which he said is trying to push Africa "to write laws favorable to … contraceptive and abortion services (the concept of 'reproductive health') as well as homosexuality."

All this, Sarah said, "is contrary to African culture and to the human truths illuminated by the divine Revelation in Jesus Christ." Africa, he said, "must protect itself from the contamination of intellectual cynicism in the West."

In May 2012, the Vatican issued new rules for the Rome-based federation of Catholic Charities, Caritas Internationalis, which stipulated that Cor Unum will monitor the group's Catholic identity, that it must approve any cooperative agreement between Caritas and other NGOs, and that top officials of Caritas must swear loyalty oaths before Cor Unum's president.

Insiders saw the rules not only as a way of bringing Caritas more closely into the orbit of officialdom, but as a major victory for Cor Unum and Sarah.

In December 2012, the Vatican issued new rules for Catholic charities generally, also aimed at beefing up Catholic identity and ties to the hierarchy. In signing the document, Benedict XVI wrote that he did so upon Sarah's recommendation.

Among other things, the rules state that a Catholic charity may not take money "from groups or institutions that pursue ends contrary to the church's teaching."

At the time, a European veteran of Catholic charities familiar with the drafting process for the new rules told NCR that Sarah played a leading role. The concern over taking money, he said, reflected Sarah's African experience. During the 1980s and 1990s, this observer said, Sarah became concerned that U.N. agencies and major NGOs were using their money and influence to undercut traditional African values.

The case for Sarah as pope is based on three primary considerations.

First, he would symbolically express the phenomenal growth and dynamism of Catholicism outside the West. Africa's Catholic population exploded from 1.9 million in 1900 to 130 million in 2000, a growth rate of almost 7,000 percent, and Sarah would put a face on this burgeoning Catholic footprint.

Second, Sarah is a classic embodiment of the prevailing ethos among many African prelates – deeply traditional on the culture wars, yet strongly progressive on social justice issues such as the environment, war and peace, economic equality and good government. In other words, he could draw support from both conservatives and moderates in the College of Cardinals, given that each bloc can find something to like.

Third, Sarah is an old Roman hand with a track record for getting things done. Many cardinals believe the next pope has to be more of a business manager, beginning with a serious reform of the Roman Curia, and might be scared off by candidates from the developing world who are outsiders to the Vatican, but that fear doesn't apply in Sarah's case.

On the other hand, Sarah remains a longshot for the papacy for several reasons.

First, many cardinals are looking for a pope who can be a successful evangelizer, the secular equivalent of which is a "salesman." In other words, they want a pope who can make a compelling case for Catholicism in the competitive lifestyle marketplace of the 21st century, which implies good communications skills and a degree of media savvy.

Sarah, however, is more of a behind-the-scenes figure than a showman. He comes off as warm, funny, and modest in person, but he's not always comfortable playing on a big stage.

Second, Sarah isn't that well known to many cardinals, despite having been in Rome since 2001. Precisely because he's kept a low profile, he's someone they've met at synods of bishops and other Vatican events, but he hasn't always left a strong impression. As a result, some cardinals may feel that casting a vote for Sarah would be akin to rolling the dice, and they may not be in a gambling mood.

Sarah has never been a major public personality, and some cardinals may wonder how he'd hold up under the intense spotlight that's always trained on the papacy.

Third, having a second African in the race could risk splitting the vote among those cardinals who think an African pope would be a good idea. Actually, one could argue that yet another African could also get a look, Cardinal John Onaiyekan of Abuja, Nigeria, who's arguably the biggest personality and most natural evangelist among the African prelates.

Despite those considerations, anything's possible in a conclave that seems, at least for now, to lack a clear favorite.