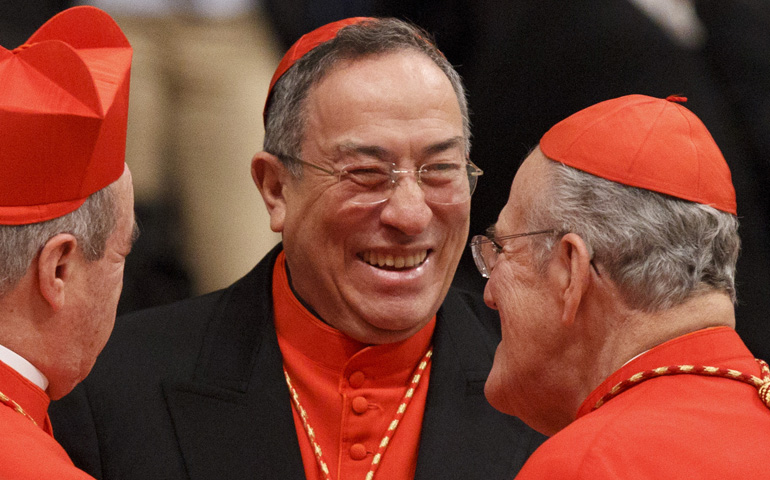 Let’s assume you’re a big-time Hollywood producer, and you’re developing a movie about a pope who makes the Catholic church seem fresh and hip. If you were to call Central Casting to fill the part, whoever they send up would probably look a lot like Cardinal Oscar Rodriguez Maradiaga of Tegucigalpa in Honduras.

Now 70, Rodriguez was just 58 when he was named a cardinal in 2001, and he took the world by storm. We’re talking about a tall, handsome prelate who plays both the saxophone and the piano, who’s trained as a pilot, who speaks six languages comfortably, who’s got a wide smile and genuine charisma, and who’s seen as a ferocious champion of the poor. He’s a massive hit on the lecture circuit and in media circles worldwide.

In Honduras itself, Rodriguez has long led the pack in terms of moral authority and social influence. In the 1990s, for instance, he was asked to lead a commission to restore the police force to civilian control. At one point during the deliberations, Rodriguez flew to Houston for a dental emergency, and awoke to discover that he had been named police chief! He scrambled to convey his regrets.

The story is illuminating: In a time of crisis, he was seen as the only figure most Hondurans would trust.

Rodriguez Maradiaga has been such an outspoken opponent of the drug trade in Central America that he’s had to move around with a military escort, given how often narco-terrorists have threatened his life.

When Rodriguez returned to Tegucigalpa from the April 2005 conclave, even though he hadn’t been elected pope, the local daily El Heraldo dedicated a special section to him under the headline, “Our Hope, Our Leader, Our Pride.”

For a time, Rodriguez Maradiaga was widely touted as a pope-in-waiting, such an obvious candidate to be the first pontiff from the developing world that he might as well start sizing curtains for the papal apartments.

Inevitably, however, such acclaim brought backlash, with some fellow prelates grumbling that he seemed to be running for pope, as well as occasions to stumble.

Rodriguez has represented the Holy See to both the International Monetary Fund and the World Bank, charging that “neo-liberal capitalism carries injustice and inequality in its genetic code.” Yet critics sometimes whisper that his good intentions are not matched by command of the nuts and bolts of economic policy.

In 2006, Rodriguez responded to such criticism.

“We’re not Noble Prize winners in economics,” he said of socially engaged Catholics, “but we know humanity, and much of the time that’s enough.”

In 2002, Rodriguez set off a tempest in the United States by comparing media criticism of the Catholic Church in light of the sex abuse scandals to persecutions under the Roman emperors Nero and Diocletian, as well as Hitler and Stalin. He suggested that the American media was trying to distract attention from the Israel/Palestinian conflict, hinting that it reflected the influence of the Jewish lobby.

Those comments brought angry protests from both sex abuse victims and the Jewish Anti-Defamation League. Earlier this month, the Survivors Network of Those Abused by Priests put out a statement including Rodriguez on a list of candidates for the papacy with a troubling record on the abuse crisis.

Rodriguez later said in an interview with NCR that his intent was to draw attention to the suffering of peoples in the Third World, suggesting that the massive media attention to the scandals in the American press was disproportionate.

Critics also say that Rodriguez played with fire during a 2009 coup in Honduras, appearing to send contradictory signals.

When the left-of-center Manuel Zelaya came to power in 2006, Rodriguez seemed to support him, but later became critical, claiming that Zelaya was becoming radicalized under the influence of Venezuela’s Hugo Chavez.

After the Honduran military seized power in June 2009, Rodriguez first remained silent, then read a statement on national television that seemed to bless the action. Facing criticism over what was perceived as an anti-democratic stance, Rodriguez backpedalled, insisting he merely wanted to avoid bloodshed.

Though it’s more of an insider affair, Rodriguez was also widely perceived as the loser of an internal Vatican power struggle in 2011. Rodriguez serves as the elected president of Caritas Internationalis, whose female secretary general was refused permission to stand for a second term by the Secretariat of State as part of a broader effort to ensure that Caritas moves more closely in the orbit of officialdom.

Defenders of Caritas hoped that Rodriguez could convince his fellow Salesian, Cardinal Tarcisio Bertone, the Vatican’s Secretary of State, to back down, but it didn’t work.

Despite that baggage, many observers still take Rodriguez Maradiaga seriously as a papal candidate.

Born in Tegucigalpa in 1942, Rodriguez joined the Salesian order in 1961 and was sent on for higher studies, eventually earning doctorates in philosophy, theology, moral theology and clinical psychology.

Rodriguez did his theological training in the post-Vatican II period. Among other stops, he studied at the Alfonsian Academy in Rome, where he took classes from the legendary liberal moral theologian Bernhard Häring. Rodriguez calls the famed Redemptorist, who died in 1988, an “idol.”

Rodriguez was named auxiliary bishop of Tegucigalpa in 1978, at the stunningly tender age of 35. He became archbishop in 1993, and a cardinal in 2001.

Despite Rodriguez’s high international profile, observers say that in many ways he’s also been an adroit leader of the local church. In 2010, enrollment at the national seminary was 170, an all-time high for a country where the total number of priests is slightly more than 400. Before Rodriguez took over, there were fewer than 40 candidates.

The case for Rodriguez as pope is easy to make.

First, he would be a captivating symbol of the growth of Catholicism outside the West, and not merely because of the accident of birth. He’s long seen himself as a tribune for the peoples of the developing world; in 2006, distinguished Italian journalist Enzo Romeo published a biography of Rodriguez titled The Oscar in Purple: Cardinal Rodriguez Maradiaga, the Voice of Latin America.

Among many vintage Rodriguez sound-bites decrying injustice, he once said, “The colonialism of the past was based on warships, and the new colonialism on money.”

Second, Rodriguez Maradiaga seems ideally cut out for the part of “Missionary-in-Chief” for the Catholic church, a charismatic polyglot with vast experience of playing on a big international stage. His success generating vocations in Honduras suggests this isn’t just superficial charm, but a real capacity to inspire faith.

Third, Rodriguez would be able to play the role of mediator in many of Catholicism’s internal conflicts. He’s certainly no liberal by secular standards; he’s said publicly that any Catholic politician who supports abortion rights is automatically excommunicated, and in 2009 he backed Benedict XVI’s position that simply distributing condoms will not resolve the problem of HIV-AIDS.

Yet Rodriguez is also a darling of the center-left wing of the church for his lifelong advocacy of social justice concerns, his sympathy for liberation theology, and his theological pedigree as a disciple of Häring.

Fourth, Rodriguez served as the secretary general of CELAM, the bishops’ conference of Latin America, from 1987 to 1991, and as president from 1995 to 1999. As noted, he’s currently the president of Caritas Internationalis. Not only do those positions illustrate the wide respect he enjoys, both across Latin America and in Catholic circles around the world, but they also mean he’s got plenty of administrative experience. At a time when many cardinals believe the next pope has to be a more diligent business manager, that’s an attractive profile.

Fifth, Rodriguez speaks Italian fluently and studied in the eternal city, positioning him to be comfortable in the role of Bishop of Rome.

Yet there’s also sufficient doubt about Rodriguez that most observers still regard him as a longshot.

For one thing, he was widely seen as a compelling candidate the last time around, in 2005, but didn’t have any real traction inside the conclave. He wasn’t even the most successful Latin American candidate eight years ago, who was instead Cardinal Jorge Mario Bergoglio of Buenos Aires in Argentina.

Second, Rodriguez Maradiaga is seen by some cardinals as a few notches too far to the left of center. It’s no stretch to imagine headlines in conservative media outlets declaring “Marxist Elected Pope!” should Rodriguez he chosen, and however genuinely concerned most cardinals are about poverty, they may not be ready to risk that sort of perception.

Third, Rodriguez’s decade-old comments on the sex abuse crisis could come back to haunt him, even though he’s tried repeatedly to stress his concern for victims and his support for rooting abusers out of the priesthood. Were he to be elected, Vatican PR personnel would have to work overtime to explain the new pope’s record, and especially in a conclave determined to find someone with clean hands on the abuse issue, that’s likely a real concern.

Fourth, Rodriguez has no experience of working inside the Vatican, and the fallout from the Caritas crackdown may suggest to some cardinals that he lacks the political heft to get things done. If he couldn’t move the ball with a fellow Salesian in charge, they might wonder, how would he really fare in bringing the old guard under control?

For those reasons, Rodriguez Maradiaga seems stalled on most handicapping sheets at the “B” and “C” level of papal candidates. Yet in the wake of one massively surprising twist to this story already, meaning Benedict’s resignation, almost anything seems at least thinkable.