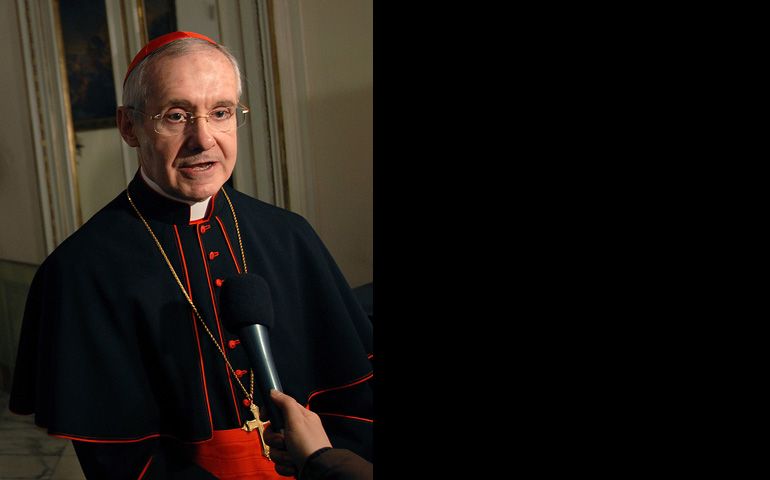 In the elaborate choreography of a papal transition, the most keenly anticipated moment belongs to the Protodeacon, meaning the senior cardinal in the order of deacons. By tradition, he's the one who steps out onto a balcony overlooking St. Peter's Square to deliver the Habemus Papam announcement, revealing the name of the new pope.

At the moment the Protodeacon is 69-year-old French Cardinal Jean-Louis Tauran, a veteran Vatican diplomat and president of the Pontifical Council for Interreligious Dialogue. Hence if anybody other than Tauran steps out, the eldest daughter of the church can get a jump start on celebrating the election of the first French pontiff in 635 years.

On paper, Tauran profiles as virtually the perfect anti-candidate, meaning someone who really shouldn't be in the running at all: a history of health scares, a career bureaucrat with zero pastoral experience, and a delicate personality at a time when many cardinals are seeking a strong governor.

Under the heading of "anything's possible," however, Tauran is still taken seriously in some circles as a longshot possibility, perhaps a fallback candidate in case of deadlock.

Born in Bordeaux in 1943, Tauran studied at the Jesuit-run Gregorian University, where he earned a doctorate in canon law in 1973, and then at the Pontifical Ecclesiastical Academy, the Vatican's elite school for diplomats.

Over the course of his career, Tauran served in Vatican missions in the Dominican Republic, Lebanon and Haiti before being named the Vatican's Secretary for Relations with States in December 1990, a position he held until 2003.

Today, many observers regard those years as the apogee of recent Vatican diplomacy, the last time the Vatican deployed its moral and political influence on the global stage in truly relevant fashion. That's not to say these efforts were an unmixed success; early in Tauran's tenure, French President François Mitterand blamed the Vatican's hasty recognition of Croatia and Slovenia for triggering war in the Balkans, and at the very end of Tauran's run the Vatican failed to persuade the Bush administration not to invade Iraq.

Yet the mere fact that major global powers such as France and the United States found themselves pondering the Vatican's next move suggests that, for good or ill, the Vatican mattered.

Tauran was especially outspoken in the run-up to the Iraq War, claiming that a U.S. invasion would be a "crime against peace" and a violation of international law. His comments irked the U.S. Ambassador to the Holy See, James Nicholson, who had previously been the head of the Republican National Committee. Privately, many American conservatives groused that Tauran reflected the usual French anti-Americanism, and celebrated in October 2003 when he was replaced with Italian Archbishop Giovanni Lajolo. (Now a cardinal, Lajolo too will take part in the conclave.)

Tauran was named the Vatican's archivist and librarian in 2003, and made a cardinal in the same year. Despite the red hat, many at the time saw the move as a demotion, or at least a step back, related in part to his diagnosis with Parkinson's disease.

In 2007, however, Tauran staged a comeback. Benedict XVI named him as president of the newly restored Pontifical Council for Interreligious Dialogue, an office the pope had originally tried to collapse into the Pontifical Council for Culture. That move was read as watering down the Vatican's commitment to inter-faith dialogue, and Benedict wanted to send a signal that he remained serious about it.

His decision to tap Tauran thus seemed to suggest that the French cardinal still had legs as a serious player.

As head of the council, Tauran has invested considerable energy in Catholic/Muslim relations, often stressing political questions such as religious freedom more than strictly theological matters, and forging ties with governments and statesmen as much as clerics and religious institutions. Not only does that reflect his diplomatic background, but it's perfectly consistent with Benedict's preference for "inter-cultural," as opposed to "inter-religious," dialogue.

For instance, Tauran recently came to the defense of a teenage girl in Pakistan accused of blasphemy for defacing some pages from the Qu'ran, arguing that she's illiterate and handled the pages of the holy book only because they were in a pile of garbage through which the impoverished teen was sifting.

Such interventions are not really the stuff of theological exchange; they're about deploying the moral resources of the Vatican to resolve a legal and political problem, which is what diplomats do.

In 2008, Tauran publicly thanked Muslims for bringing God back into public debates in Europe, anticipating Benedict XVI's "Alliance of Civilizations" speech in Jordan in 2009 in which the pontiff argued that Muslims and Christians are natural allies in the struggle against radical secularism.

Tauran is also a member of the council of cardinals that supervises the Institute for the Works of Religion, better known as the "Vatican Bank," as well as the Second Section of the Secretariat of State, the Congregation for the Doctrine of the Faith and the Congregation for Bishops – all important assignments that speak of genuine behind-the-scenes influence.

On a personal level, Tauran is seen as an unpretentious personality with a wry sense of humor, and a wide network of friends. Those friendships are surprisingly ecumenical; for instance, he's close to Anglican luminaries such as John Andrew and Roger Greenacre, and has been known to use an Anglican breviary for his private prayer.

In interviews with various media outlets, including NCR, several cardinals have described three qualities they're looking for in the next pope, aside from personal holiness and a keen mind: A global vision, a capacity to evangelize, and the ability to govern. One could make a good case that Tauran satisfies all three.

He's clearly got the global vision. We're talking about a citizen of the world, a man who's traveled widely, speaks at least four languages comfortably, and has been on the front lines of virtually all the world's major hotspots for the last three decades. Arguably, no one else in the running for the papacy can rival Tauran's command of the global situation.

Given that relations with Islam will have to be at the top of the next pope's agenda, Tauran's expertise in that arena is especially attractive.

Though he's never been a pastor, Tauran's intelligence and tact have the capacity to make Catholicism seem reasonable and a constructive force in the world, helping overcome prejudices secular society often fosters about the church. Moreover, the election of a Frenchman could be a shot in the arm for the church in one of the most thoroughly secular cultures on earth.

In terms of governance, Tauran is an old Vatican hand who knows where the bodies are buried, yet he's not associated with any of the meltdowns of the last eight years. When he was in the Secretariat of State, he had a reputation as a capable administrator who got things done.

In a recent interview with the French news agency I.Media, Tauran said the next pope should be "very open to dialogue with cultures and religions", be prepared to reform the Roman Curia, and be somewhere between 65 and 70.

On the other hand, the case against Tauran is formidable.

First, some cardinals simply will not vote for a prelate who's never served as either pastor of a parish or a diocesan bishop. Even the man who took over from Tauran as foreign minister, Lajolo, has said publicly that he would not vote for a career bureaucrat because the church needs a "pastor of souls."

Second, Tauran's health is a real concern. Memories of John Paul's agonizing decline due to Parkinson's disease are still fresh, and while the pope's courage was inspirational, no one is anxious to live through such a long twilight again. Although Tauran's friends say he's fine, and he keeps up a demanding work and travel schedule, there have been recent hints of fragility. Last April, for instance, Tauran collapsed during the Vatican's Easter Sunday Mass and had to be escorted from the altar.

Third, some cardinals may regard Tauran as a bit too moderate, too diplomatic and pragmatic, to offer a principled defense of church teaching vis-à-vis the pressures of an increasingly secular culture in the West. Tauran is seen as a man of détente, but that may not be what some cardinals believe the situation requires.

Fourth, some American cardinals may still feel ambivalent about Tauran's blistering criticism of U.S. foreign policy in 2003. While the American bishops also expressed reservations about the Iraq War, and subsequent experience has proven Tauran prophetic that the first casualties would be Iraq's Christian minority, some Americans felt at the time that Tauran's rhetoric was over the top, occasionally flirting with anti-American prejudice.

Fifth, some cardinals may look at Tauran and see a better candidate for Secretary of State than pope. Even if they admire Tauran, they may think the papacy is better suited to someone else, who could then tap the diplomat for the role of "Prime Minister."

Tauran has figured on several lists of papabili in recent days, usually with the caveat that his health is a question mark. In that sense, Tauran may be among the greatest beneficiaries of Benedict's resignation, because cardinals may think that if his Parkinson's does progress, a "Papa Tauran" would have an exit option.

However, assuming Tauran does indeed step out to deliver the Habemus Papam announcement, we'll know immediately this is one longshot who didn't come through.

The Media and Honduras

Pope lauds 'maternity of God' as counter-sign to egoism

Obama's new immigration policy a step in the right direction