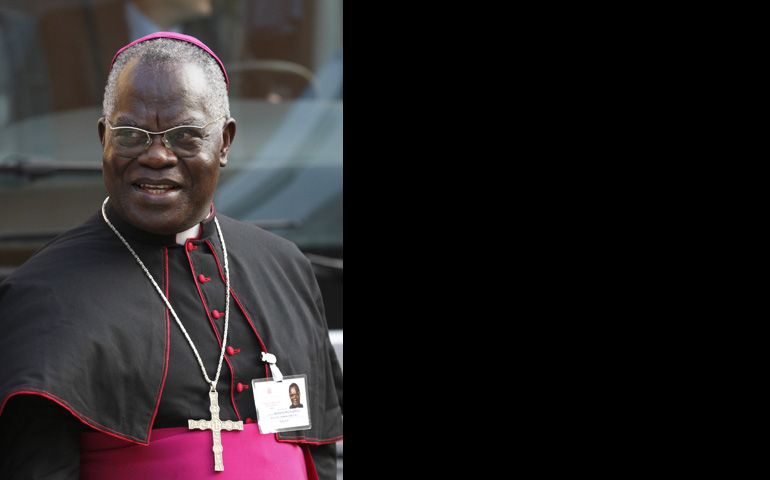 Cardinal Laurent Monsengwo Pasinya of the Democratic Republic of Congo in 2009 (CNS/Paul Haring)
This article appears in the Conclave 2013 feature series. View the full series.

A pope, of course, is not merely a spiritual leader but also a head of state, since the Holy See is a sovereign entity that enjoys diplomatic relations with 179 nations. There's an awfully good case that no one in the College of Cardinals is better prepared for that aspect of the job than Laurent Monsengwo Pasinya of the Democratic Republic of Congo, the lone cardinal to have previously served, more or less, as a country's chief executive.

Back in the early 1990s, what was then Zaire was feeling its way towards life without strongman Mobutu Sese Seko, who ruled the country from 1965 to 1997. A transitional "High Council of the Republic" needed someone with moral authority and a reputation for independence to lead the process of drafting a new constitution, acting as the de facto national leader during the fin de regime period.

Nobody from the political class fit the bill, so the nation instead turned to the then-Auxiliary Bishop of Kisangani, a polished and urbane cleric named Laurent Monsengwo Pasinya. He not only served as president of the council, but also as transitional speaker of the national parliament in 1994.

Monsengwo gets mixed reviews for how well he handled the role – in part because it wasn't really his diplomacy that brought an end to Mobutu's rule, but the First Congo War and the armies of Laurent-Désiré Kabila. When Monsengwo later spoke out against Kabila's anti-democratic tendencies, charges that the archbishop had been "pro-Mobutu" become a staple of government rhetoric.

Some Catholics agreed that Monsengwo had been overly soft, especially given the persecution they'd experienced at the hands of the Mobutu regime. At one point Mobutu ordered all Christians in the country to adopt non-Christian names, and at another he ordered crucifixes and pictures of the pope to be taken down in Catholic schools and replaced with images of himself. For a time, Cardinal Joseph-Albert Malula of Kinshasa was forced into exile.

Critics accused Monsengwo of vacillating while Africa was gripped by genocide. Admirers, however, say Monsengwo was trying to find a third way between dictatorship and chaos, noting that it's one thing to stand on the outside of the political process and toss bricks, quite another to remain within it and try to get something done.

In any event, if one dimension of papacy is to engage tough political and diplomatic questions, nobody's been down that road before quite like the Cardinal of Kinshasa.

Born in Mongobele, in what is now the DRC, in 1939, Monsengwo belongs to the royal family of his Basakata tribe; his name actually means, "relative of the chief." As a young he was sent to Rome for studies, first at the Pontifical Urbaniana University, home to seminarians from the developing world, and then to the prestigious Pontifical Biblical Institute.

He also put in a stint at the Pontifical Biblical Institute in Jerusalem, where one of his teachers was a promising Italian Jesuit named Fr. Carlo Maria Martini, who went on to become the cardinal of Milan and one of the leading intellectual lights of the Catholic church. In Jerusalem, Monsengwo became the first African to earn a doctorate in Biblical studies from the institute.

After doing pastoral work and teaching in the local seminary during the 1970s, Monsengwo became a bishop in 1980, at the tender age of 40. He was consecrated by Pope John Paul II himself during the pope's May 1980 trip to Zaire, his first outing to Africa.

Monsengwo was immediately elected the president of the Congolese bishops' conference, a post he would hold again in 1992. He became the Archbishop of Kisangani in 1988, and the Archbishop of Kinshasa in 2007. Benedict XVI raised him to the rank of cardinal in November 2010.

Now 73, Monsengwo obviously enjoys the esteem of the former pope. Not only did Benedict make him a cardinal, after a long stretch in which many people thought Monsengwo's window of opportunity had closed, but in 2008 Benedict tapped Monsengwo as the relator, or general secretary, of the Synod of Bishops on the Bible. In February 2012, Benedict also invited the African prelate to deliver the Vatican's annual Lenten retreat.

Monsengwo is a member of the Vatican's powerful Congregation for the Evangelization of Peoples, which coordinates support for local churches all across the developing world.

He's a familiar face on the Roman scene, frequently sought after as a speaker on African affairs and geopolitics. For years, he's been the go-to voice for media outlets in Rome on matters pertaining to the Catholic church in Africa, in part because he speaks fluent Italian. (Remarkably, Monsengwo is said to be at least passable in fourteen languages, including both the major European languages and a variety of tribal dialects.)

Monsengwo has continued to act as a voice of conscience in the post-Mobutu period. On more than one occasion, the Kabila government confiscated his passport to prevent from travelling abroad and voicing his criticism in the international arena. He's also had cross words for the new regime under President Denis Sassou Nguesso, most recently questioning the legitimacy of the November 2011 general elections – a stance for which, according to the media outlet Jeune Afrique ("Young Africa"), he was subjected to a "lynching" in state-controlled media.

In other contexts such language might be hyperbole, but Monsengwo has literally put his life on the line. In 2010, two men dressed as priests showed up wanting to see him, when their stories didn't check out the police were summoned, who found handguns hidden under their cassocks. When Monsengwo's 22-year-old nephew was murdered in South Africa in 2012, many Congolese suspected the involvement of political factions in the DRC threatened by the cardinal's moral criticism.

The case for Monsengwo as pope rests on three points.

First, he would symbolize the phenomenal growth of Catholicism in sub-Saharan Africa, where the church's following shot up by almost 7,000 percent during the 20th century from 1.9 million to more than 130 million. By 2050, the Democratic Republic of Congo is projected to become the fifth largest Catholic country in the world, with a Catholic population of just under 100 million people.

Second, Monsengwo's life experience could position him to revitalize the political and diplomatic activity of the Vatican, something that many observers believe went into eclipse under Benedict XVI. After a pontificate more focused on the inner life of the church, some believe, it's time for a pope more vitally focused on the raging external questions of the day – war and peace, the pathologies of globalization, the rise of Islam, and so on. In that context, Monsengwo could seem an attractive candidate.

Third, Monsengwo is an urbane and sophisticated thinker who could appeal to a variety of different constituencies within the College of Cardinals. With his vast experience of government, both ecclesiastical and secular, he could be seen as someone who can take control of complex organizations and make them work – an important selling point in a conclave in which governance, especially in the bureaucracy of the Vatican, looms as a major voting issue.

However, there are also some serious reservations.

First, some cardinals may find the intricacies of Monsengwo's role during the end of the Mobutu regime and the 1994 genocide hard to fathom, and worry that they don't really know enough to make an informed assessment.

Second, Monsengwo is an undeniably impressive figure in terms of both intellect and political savvy, but he's not the most dynamic presence on the public stage you'll ever meet. He can come off as cerebral and stiff, which may cause some cardinals to wonder if he's really the pitchman the church needs to give legs to the "New Evangelization."

Third, although Monsengwo is an old Roman hand in one sense, he's never worked in the Vatican and could require some "one the job" training to get his hands around the bureaucracy. To really fix the place, some cardinals believe what's required isn't so much a diplomat as a tough-as-nails CEO.

Fourth, at 73 Monsengwo is just on the cusp of being seen as too old for the job, especially on the heels of a pope who just resigned for reasons of age.

At the moment, Monsengwo figures on many lists of papal candidates, but nobody seems to have him on their "A" lists. Yet in a wide-open race, if nobody gets close to a two-thirds votes after the early rounds of the conclave, all sorts of options may be on the table – including the only cardinal with a previous stint actually running a country.

Read all of John Allen's papabile of the day profiles.

'You do know, right, that the world is getting better'