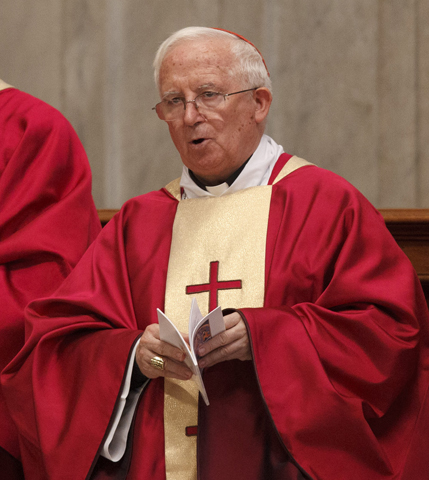 One shouldn't presume that continuity with Benedict XVI will be the top concern of all 115 cardinals now getting ready to elect his successor, since many of them believe the "pope emeritus" was a great teacher but a mixed bag as CEO.

Yet for those who do see continuity as job number one, their candidate might well be the man known around Rome for years as "the little Ratzinger."

Cardinal Antonio Cañizares Llovera, 67, has led the Congregation for Divine Worship since December 2008, after six years as the Archbishop of Toledo and Primate of Spain. The nickname "little Ratzinger" comes from earlier in his career, when Cañizares served as the chief of staff for the doctrine committee of the Spanish bishops' conference from 1985 to 1992.

They were years of high drama, as Spanish theologians were prominent in the church's intellectual Avant-garde. Cañizares played the same role in Spain that then-Cardinal Joseph Ratzinger did at the global level in holding the line against these currents, and the two men became close friends.

(The qualifier "little" works in another sense too, as Cañizares is a fairly short man. In pictures with the pope, Benedict often seems to tower over him.)

Both admirers and detractors of Cañizares have embraced the nickname "little Ratzinger," suggesting that whether you find his similarity to the retired pope encouraging or distressing, everyone can agree it fits.

Born in 1945 in Utiel, located in Spain's Valencia region, Cañizares studied theology at the Pontifical University of Salamanca and was ordained to the priesthood in 1970, amid the ferment of the immediate post-Vatican II period. Like his mentor Joseph Ratzinger, Cañizares became concerned that the baby was being tossed out with the bathwater, that too much of the church's intellectual and spiritual tradition was being either watered down or set aside.

During the 1970s, Cañizares taught theology in a string of universities and seminaries, with a special interest in catechesis. He founded an association for Spanish catechists, and also directed a theological journal called Teología y Catequesis.

Cañizares was named the Bishop of Avila in 1992, at the age of 46. It was evident this was a bishop with a passion for the life of the mind; in 1996, he founded the Universidad Católica Santa Teresa de Jesús de Ávila, more commonly known as the Catholic University of Avila. In the spirit of Teresa of Avila, the university offers a program in Catholic mysticism along with degrees in business, law and engineering.

In 1996, Cañizares took over as the Archbishop of Granada. Just before his appointment, he was also named a member of the Vatican's Congregation for the Doctrine of the Faith, cementing his friendship with the future pope. He also helped compile the Spanish edition of the Catechism of the Catholic Church.

He moved up the ladder again in 2002, becoming the de facto leader of the Spanish church as the Archbishop of Toledo, and entered the College of Cardinals in Benedict XVI's first consistory in March 2006.

His years in Toledo overlapped with the first term of Spain's Socialist Prime Minister José Luis Rodríguez Zapatero, who became the bogeyman of the European Catholic imagination by challenging the church on virtually every imaginable front – from liberalizing abortion and gay marriage to trimming tax subsidies for Catholic schools and other institutions.

The Spanish leader became such a metaphor for secularism on steroids that when Barack Obama was elected in 2008, the most common reaction among Vatican officials was the hope that he wouldn't become a "global Zapatero."

Cañizares emerged as the most acerbic critic of the Zapatero regime, so much so that when he relocated to Rome in 2008 some Spaniards thought it was tantamount to the church waving a white flag after Zapatero's reelection.

In truth, the move probably wasn't an instance of the old Roman principle of Promoveatur ut amoveatur, "promoting to remove." Instead, Benedict is a pope keenly interested in the church's liturgical life, and he wanted a figure of trust to take over the Congregation for Divine Worship and the Discipline of the Sacraments from Nigerian Cardinal Francis Arinze.

(The perceived urgency of moving a "Ratzingerian" into that office was all the greater since plans were already in motion to name the congregation's secretary, Malcolm Ranjith, as the new Archbishop of Colombo in Sri Lanka.)

As the Vatican's top liturgical official, Cañizares has publicly expressed reservations about taking communion in the hand, arguing that receiving it on the tongue in a kneeling position better expresses a spirit of adoration.

Cañizares also robustly defended Benedict's decision in 2007 to widen permission for celebration of the old Latin Mass, arguing that "even if there weren't a single traditionalist" in the Lefebvrist camp to appease, the pope would still be right to make the liturgical heritage of the church more broadly available. In November 2012, Cañizares celebrated a Tridentine Mass for a group of traditionalist Catholic pilgrims loyal to the pope.

In 2011, Cañizares established a new commission within his office for liturgical art, architecture and music, the apparent purpose of which is to promote a more reverent, traditional ethos in all those fields. Recently Cañizares said that if French Archbishop Marcel Lefebvre had ever seen the post-Vatican II Mass celebrated the right way, he might never have split with Rome.

At a personal level, Cañizares is also reminiscent of Benedict XVI. He may be tough as nails on doctrine, but he comes off in person as mild, gracious, and a little shy.

The case for Cañizares as pope is easy to roll out.

First, he represents intellectual and spiritual continuity with Benedict XVI as much, and arguably more, than any other single figure in the College of Cardinals. Given that 66 of the 115 cardinals who will be voting were named by the pope emeritus, that's probably no small electoral advantage.

Second, at least on paper Cañizares ticks off most of the boxes on the cardinals' wish list for the next pope. He's in the right age window at 67 for a papacy that's neither too long nor too short; he's got a mix of pastoral and Vatican experience; and he's an expert on catechesis at a moment when the church's highest internal priority is the New Evangelization.

Third, Cañizares' theological and liturgical views may be polarizing in some circles, but on a personal level he's seen as kind and non-threatening. In an election in which personal relationships count at least as much as issues, that profile could take the Spanish prelate a long way.

Fourth, there was considerable speculation in the Italian papers back in 2008 that Cañizares was being removed from Toledo at the inspiration of Cardinal Tarcisio Bertone, the Secretary of State, who supposedly wanted to launch a sort of Ostpolitik with the Zapatero government. Whether that's true almost doesn't matter; at a moment when there's fairly strong discontent among many cardinals with Bertone's performance, the perception that Cañizares isn't part of his team may work in his favor.

Yet the case against Cañizares is fairly strong too.

First, governance is shaping up as a key voting issue in the 2013 conclave, and many cardinals may look at Cañizares and see a photocopy of Benedict XVI: a great mind and a prayerful soul, but someone ill-suited for the administrative and managerial dimension of the papacy.

Second, in terms of languages, Cañizares is truly comfortable only in Spanish. While that's the native tongue of almost half the world's 1.2 billion Catholics, many cardinals believe the next pope not only has to be proficient in Italian, to play his role as the Bishop of Rome, but also English, which is the dominant language of the world's media.

Third, for those cardinals looking for someone who can reconcile diverse currents in the church, and who can engineer a sort of détente with the secular world, Cañizares may be seen as a few notches too far to the right.

Fourth, a Cañizares papacy would likely be similar to that of Benedict XVI in another sense, in that he would likely be more focused on the internal life of the church rather than the ad extra dimension, engaging issues in the outside world. At a moment when the defense of religious freedom is seen as an urgent priority, especially in light of growing anti-Christian persecution around the world, some cardinals may believe the times call for a more "political" pope – someone who can mobilize the diplomatic and social capital of the church to make a difference on the global stage.

Fifth, Cañizares gave an interview in 2009 to a Catalan TV station at the time the Ryan Report appeared in Ireland, arguing that abortion is a far more serious crime against humanity than child sexual abuse by clergy. While many cardinals may agree in principle, they may also not want the next pope to have to spend the early days of his pontificate trying to explain his views on the sex abuse crisis.

(To be clear, Cañizares said in the same interview that the behavior of some Catholic priests and nuns in Ireland was to be totally condemned, and that they had committed crimes "for which we have to ask forgiveness".)

If this were the conclave of 2005, when continuity was the driving issue, Cañizares might well profile as a front-runner. It's a different mood in 2013, however, and for cardinals seeking to remedy what they perceive as the managerial deficiencies of the last eight years, he might not seem the best choice.

Nonetheless, in a fairly wide-open race it's just on the cusp of possibility that the "little Ratzinger" could be tapped for the church's biggest job.