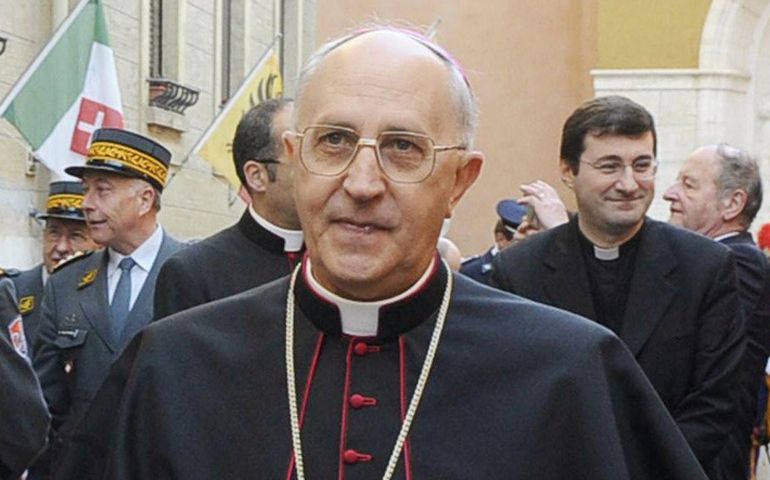 Cardinal Fernando Filoni, Prefect of the Congregation for the Evangelization of Peoples in 2009 (CNS/Reuters/Danilo Schiavella)
This article appears in the Conclave 2013 feature series. View the full series.

Quite obviously, the cardinals preparing to elect the next pope aren't looking at this as a PR exercise. If they were, they wouldn't have shut down their access to the media, thereby ensuring that speculation and external voices are likely to dominate coverage over the next few days.

If they were thinking in terms of news cycles, however, they might well ask: Who among us would give the church the best day-one story as the next pope?

Were that the question, 66-year-old Italian Cardinal Fernando Filoni would be a pretty good answer.

Consider this headline, which would likely be the main narrative if Filoni were elected: "The pope who didn't blink when bombs fell on Baghdad."

The reference is to April 2003, when Filoni was serving as the papal ambassador in Iraq. At a time when other diplomats fled for safety, as well as U.N. officials and journalists, Filoni refused to leave, saying he couldn't abandon the local Catholic community and other suffering Iraqis.

"If a pastor flees in moments of difficulty," he said later, "the sheep are lost."

Filoni remained in the country for the aftermath of the war, as Christians found themselves primary targets amid rising chaos. He refused to adopt special security measures, wanting to face the same risks as locals who didn't have access to guards and armored vehicles. He said his aim was to be seen "as an Iraqi, by the Iraqis."

That choice almost cost him dearly in February 2006, when a car bomb went off outside the nunciature, demolishing a garden wall and smashing window panes, but luckily leaving no one hurt. Afterward, a Muslim contractor showed up with 30 workers to repair the damage out of respect for the solidarity Filoni had shown.

Born in Taranto, Italy, in 1946, Filoni's seminary studies coincided with the period of the Second Vatican Council (1962-65), and his episcopal motto is Lumen gentium Christus, recalling the council's dogmatic constitution on the church.

In a 2012 interview, Filoni said one of the ways he survived the upheaval of the 1970s, when he was doing graduate study, was by living in a parish rather than a college. As a result, he said, he kept contact with the practical concerns of real people instead of getting caught up in ideological debates.

Filoni earned doctorates in both philosophy and canon law from the Pontifical Lateran University. He also has a degree from Rome's Libera Università Internazionale degli Studi Sociali, a prestigious secular institution, where he studied "techniques of public opinion," specializing in journalism.

These were hardly pleasure cruises. Filoni was in Tehran during the bloodiest period of the Iran/Iraq war and in China for the upheaval caused by the reforms of Deng Xiaoping.

Filoni is especially well-versed on China, given his decade in Hong Kong and his fascination with the country and its people.

Since May 2011, Filoni has served as Prefect of the Congregation for the Evangelization of Peoples, deepening his contacts with the church across Africa and Asia. It's tough to name a geopolitical priority in the early 21st century -- China, Islam or anything else -- that Filoni doesn't understand from the inside out.

He's not just a diplomat, however, but also a thinker respected for this theological acumen: In April 2012, Benedict XVI made Filoni a member of the Congregation for the Doctrine of the Faith.

From June 2007 to May 2011, Filoni held the all-important job of sostituto, or "substitute," effectively the pope's chief of staff.

That aspect of his résumé is a mixed blessing because it means Filoni was on the scene for some of the more spectacular implosions of Benedict's papacy, including the cause célèbre surrounding a Holocaust-denying traditionalist bishop in 2009 and the surreal Boffo affair in early 2010. (The latter is too complicated to explain, but it pivoted on charges that senior Vatican officials were involved in a plot to smear an Italian Catholic journalist.)

Most observers, however, place the primary blame for those episodes at the feet of Filoni's former boss, Cardinal Tarcisio Bertone. Conventional wisdom is that Bertone and Filoni, once close, had a falling out. True or not, the perception helps. To some cardinals, Filoni could seem the perfect man to lead a reform of the bureaucracy -- an insider who knows where the bodies are buried, yet not terribly complicit in the perceived malaise.

Here's the argument for why Filoni could emerge as a surprise contender, especially if the early rounds of the conclave suggest none of the leading candidates can get across the two-thirds threshold.

First, cardinals have said over and over again they want a pope with global vision, especially someone who can embrace the two-thirds of the 1.2 billion Catholics in the world today who live outside the West. Arguably, nobody among the 115 electors has broader life experience and understanding of the diverse situations around the world than Filoni.

Second, the highest political and diplomatic priority facing the next pope is likely to be the defense of religious freedom, especially in hotspots where Christians find themselves in the firing line. Given that Iraq is a harrowing symbol of this anti-Christian violence, Filoni is in a unique position to raise consciousness on the issue.

Signs of his sensitivity are everywhere. When he became a cardinal in 2012, he asked for a Greek Byzantine image of Christ wearing a purple mantle to be placed on the cards handed out at his reception, saying it symbolized "the reality that even today, the church in so many parts of the world continues to pay a price in blood."

Third, despite being a career bureaucrat, Filoni can display a deft pastoral touch, including an appreciation for simple things. For the Year of Faith, the Congregation for the Evangelization of Peoples is distributing a rosary with beads of different colors between the decades representing the continents: white for Europe, red for America, yellow for Asia, blue for Oceania and green for Africa. The idea is to encourage people to pray for evangelization throughout the world.

Arguably Filoni would be an asset to the new evangelization apart from his own ability as a missionary because he understands what the contours of effective evangelization look like in different global environments.

Fourth, Filoni could appeal to both staunch conservatives and more moderate cardinals. He usually comes off as a man who won't brook compromises on Catholic identity but also someone with great tact in engaging forces hostile to the church.

Fifth, many cardinals are looking to the next pope to be more of a business manager, among other things restoring the trust ruptured by the Vatileaks affair. If protecting confidentiality is part of that concern, Filoni could be a perfect fit; it's said when he gets up from his desk at Propaganda Fidei to go the bathroom, he locks his office door, just to be sure roaming eyes don't stray across whatever papers he's left behind.

Yet for a variety of reasons, Filoni has to be considered a real long shot.

First, aside from a few brief stints in parishes as a young priest, he has little pastoral experience and has never run a diocese. Many cardinals regard such in-the-trenches seasoning as a prerequisite for the next pope. (It's worth recalling, however, that much the same criticism was voiced of Cardinal Joseph Ratzinger in 2005, and it didn't stop him from being elected on four ballots.)

Second, there's a strong anti-Italian and anti-old-guard humor percolating among many cardinals these days, frustrated with what they see as antiquated and dysfunctional ways of doing business in the Vatican. In that light, a career bureaucrat who worked inside the system during some of its recent implosions would probably face serious question marks.

On a related note, some cardinals have expressed concern that because they have not been given the confidential report prepared for Benedict XVI on the Vatican leaks affair, they don't know to what extent it might raise questions about insiders such as Filoni. Although Spanish Cardinal Julian Herranz Casado, one of the three over-80 prelates who wrote the report, apparently told a General Congregation meeting Tuesday that "no cardinal was involved," that may not be enough to allay concerns.

Third, the instinctive reaction even of Filoni's admirers to the idea of him becoming pope would probably be, "Isn't he better suited to be Secretary of State?" Many cardinals may never get past that thought in sizing him up.

Fourth, Filoni is seen as an ally of the Neocatechumenal Way, one of the new movements in the Catholic church. Moderates tend to detect a whiff of fanaticism about it, while some conservatives object to its penchant for playing fast and loose with liturgical rules. Veteran Italian writer Sandro Magister has described Filoni as a "fiery supporter," which may raise eyebrows.

Fifth, Filoni has not been mentioned prominently as a possible pope in the run-up to the conclave, which means many cardinals probably haven't given him much thought. At a time when cardinals are conscious of finding someone who doesn't bring any baggage to the job, they may feel less inclined to roll the dice.

For all those reasons, it's probably unlikely that Filoni will get a serious look. On the off-chance that he does, however, those day-one headlines about the "Hero of Baghdad" might be awfully tempting.