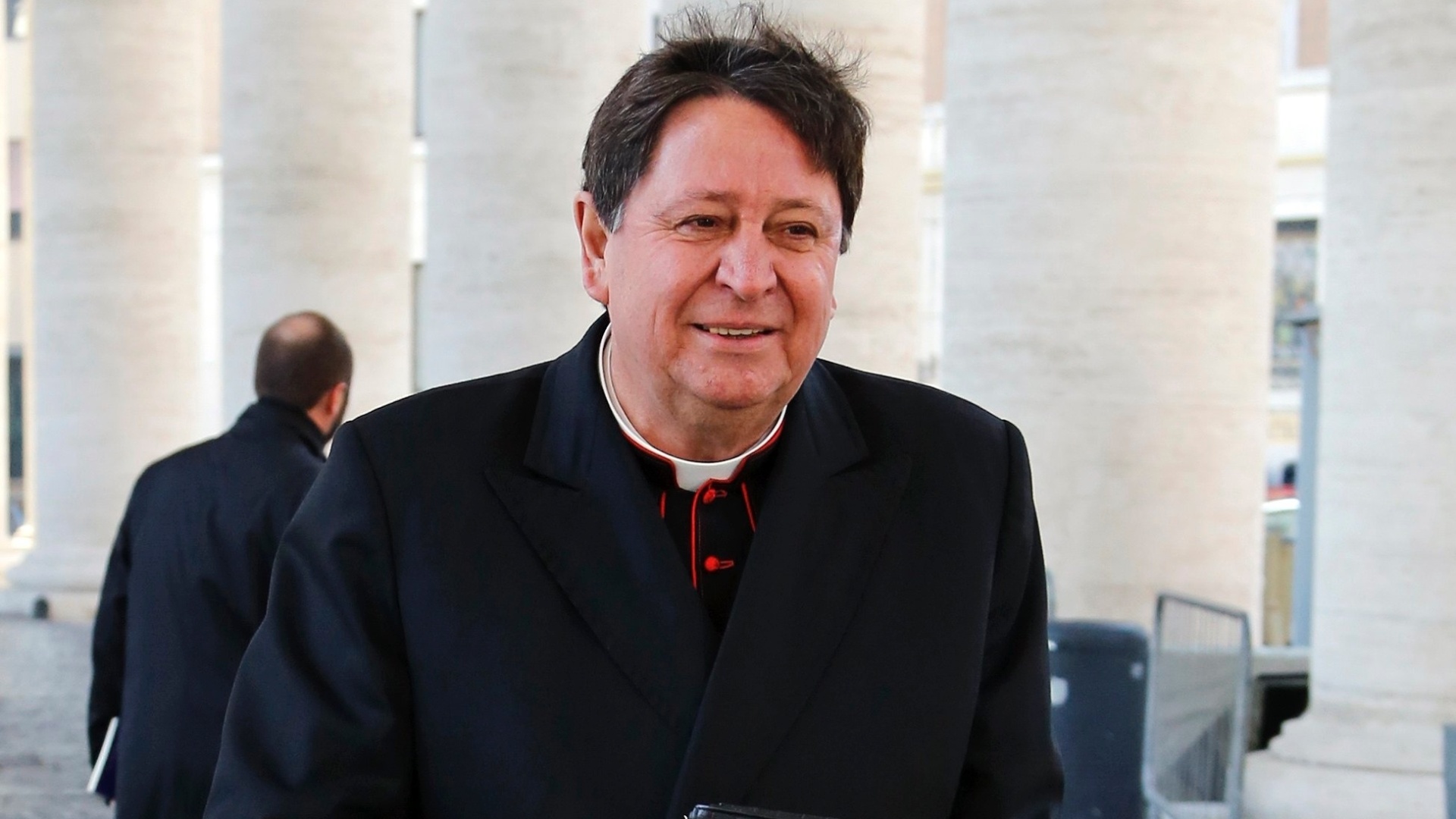 Cardinal João Bráz de Aviz of Brazil, Prefect of the Congregation for Religious

Say the words “Brazilian pope” in Rome, and most people assume you’re talking about the candidacy of Cardinal Odilo Pedro Scherer of São Paulo, recently floated in the Italian media as part of a “ticket” being put forward by the Vatican’s old guard, with one of their own slated to take over Secretary of State.

Some observers take those reports at face value, while others believe they’re calculated to damage Scherer’s chances by linking him to what Sandro Magister describes as “the feudal lords of the curia.”

In any event, Scherer is not the only Brazilian waiting in the wings. There’s another runner from the world’s largest Catholic country, whose humble roots and pastoral outlook could make him an attractive choice: 65-year-old Cardinal João Bráz de Aviz, who generally goes by the simple appellation of “Dom João.”

The politics of the 2013 conclave may leave the door open to a compromise candidate between two factions which, at first blush, seem unlikely allies. Devoted Ratzingerians are furious at poor performance by Vatican mandarins, which in their view too often left Benedict XVI vulnerable to criticism and may have hastened his decision to step down, and they’re looking to shake things up. Moderates, meanwhile, would like a pope a bit closer to the ideological and theological center.

Both currents could intersect in Bráz.

Born in the city of Mafra in southern Brazil in 1947, Bráz de Aviz has served since January 2011 as prefect of the Vatican’s Congregation for Institutes of Consecrated Life and Societies of Apostolic Life, better known as the “Congregation for Religious.”

Braz comes from a poor family, with four brothers and three sisters, one of whom has Down’s Syndrome. His father was a butcher, and their surroundings were so rural that when a child was born, the family had to travel by horse-drawn carriage for 25 miles to have the baby baptized.

Braz entered a minor seminary in 1958, at the tender age of 11, which was run by the Fathers of the Pontifical Institute of Foreign Missions.

At the age of 16, he began a lifelong friendship with the Focolare, a word which in Italian means “hearth” or “fireside.” It’s a Catholic movement created by lay woman Chiara Lubich during World War II to promote unity and universal brotherhood, and it currently operates in 182 nations with some 100,000 members.

Braz was introduced to Focolare by a chance meeting with a Cubist painter. At the time, he said, he was very attracted by the new theology of liberation and its passion for the poor, but worried about the way it seemed to draw some clergy into ideological radicalism. The Focolare, he said, helped him maintain “the right balance”.

“They taught me that I always need to try to understand the path that the other person is on, how they see things, and to learn from it,” Braz said in a 2011 NCR interview. “It’s very important to find the good in what other person thinks and feels, not to condemn it or try to destroy it. For me, there is no other path.”

Certainly no one can accuse Bráz of having lived a sheltered life, disconnected from the sufferings of ordinary people in the developing world.

As a young priest, Bráz was once on his way to a village to say Mass when he stumbled upon an armored car robbery. He was shot during the crossfire, with bullets perforating his lungs and intestines and one eye. Although he survived and surgeons were able to save his eye, he still carries fragments of those bullets in his body.

First named an auxiliary bishop of Vitória in 1994, at the age of 47, Bráz de Aviz was tapped as bishop of Ponta Grossa in 1998, archbishop of Maringá in 2002, and finally archbishop of Brasilia, the national capital, just two years later in 2004.

Despite his rapid rise up the career ladder, Bráz de Aviz generally maintained a low public profile. When news of his elevation to a Vatican position broke in January 2011, the Brazilian newspaper O Estado de S.Paulo described him as “discrete and not well-known”.

Yet he could occasionally show some spunk. In 2006, Bráz publicly rebuked politicians for giving themselves a raise, asking how they could defend making over $400 a day while most of the people they represent live on $6 a day.

Church sources in Brazil recall Bráz as a centrist, not exactly part of the liberation theology current, but also distant from the church’s traditionalist wing.

One Brazilian journalist who covers the church told NCR that during his time in Brasilia, Bráz de Aviz was seen by supporters of the older Latin Mass as an “enemy.”

Bráz also kept some distance from the progressives. In December 2008, he threatened to boycott a gathering of Franciscans if Leonardo Boff – a renowned liberation theologian who left the order and the priesthood in 1992 – was on the same program. Sources said Bráz’s problem wasn’t Boff’s defense of the poor, but his advocacy of a “church from below” against the hierarchy.

During his brief stint in the Vatican, Bráz has carved out a reputation as a reconciler, including his approach to the still-thorny relationship with women religious in the United States. His efforts began even before he got to Rome, in an interview he gave to NCR the day his appointment was announced.

“I want to learn from them and walk with them,” he said of the sisters. “You have to see people up close, get to know them, what will help them overcome whatever problem there is.”

That profile hasn’t gone down well with critics, who charge that Bráz and his former deputy, American Archbishop Joseph Tobin, sent mixed signals with respect to the insistence upon orthodoxy and obedience coming from other Vatican officials.

Bráz has also spoken in blunt terms about the Legionaries of Christ, the order founded by the late Mexican Fr. Marcial Maciel Degollado, who is acknowledged to have committed sexual abuse and misconduct.

“What is most worrying,” Bráz said in 2012, “is that at times the Legionaries aren’t aware of what is happening within their own movement.” An “overly severe discipline”, he said, is partly to blame, as well as the fact that the leaders have too much power, “sometimes in matters which the church has never relinquished authority over, like the questions of spiritual guidance and confessions.”

On the broader question of the clerical abuse crisis, he’s stressed compassion for victims: “We have to be concerned about the sanctity of the church, but we also have to be very close to those who were wounded, the victims,” he said in 2011.

In an interview with a Brazilian paper the day after Benedict XVI announced his resignation, Bráz argued that the times demand a church with “great listening skills.” (He also, by the way, appeared to hint that the time may not yet be ripe for a pope from the developing world.)

Each of those Brazilians at one point was considered a serious candidate for the papacy, though obviously none was ever elected.

There are four core reasons why Bráz could be the one to break through.

First, he’s had two years of Vatican seasoning, but he’s not associated with the ruling elite. Insiders know, for example, that Bráz appealed to keep Tobin in the number two position in his office, but that effort foundered in October 2012 when Tobin was named the Archbishop of Indianapolis. Some cardinals might see him as a good bet to break the mold – somebody who knows the system from the inside, but who also knows what it feels like to be steamrolled by it.

Second, his election would put a face on the two-thirds of the Catholic population that lives outside the West. It would also deliver a massive shot in the arm to the church in Brazil, which is facing defections both to mushrooming Pentecostal and Evangelical movements and to a rising tide of religious indifference.

Third, cardinals convinced that the next pope must be an effective evangelist might see Bráz as a compelling pitchman for the faith – a warm, avuncular figure skilled at reconciling diverse currents in the church and in engaging the outside world.

Fourth, cardinals most committed to the church’s social justice tradition would see Bráz as a strong carrier of that agenda.

Yet there are equally compelling reasons why Bráz faces an uphill climb.

First, his profile as a gentle and compassionate figure makes him personally attractive, but it may also raise doubts as to whether he has the grit necessary to really bring the Vatican bureaucracy to heel.

Second, he may be seen as slightly too centrist, too given to dialogue rather than proclamation, for cardinals who believe the next pope must carry forward the strong emphasis on Catholic identity fostered under John Paul II and Benedict XVI.

Third, Bráz may have difficulty attracting American votes. At the peak of the standoff between the Vatican and American nuns, American Cardinal William Levada was head of the Congregation for the Doctrine of the Faith, and it was well known that Levada and the Bráz/Tobin team were not always on the same page.

In a June 2012 interview with NCR, his last before leaving his Vatican post, Levada alluded to that tension, saying “it creates a perception that the Holy See is not united in its approach.”

Levada remains an influential figure, especially among his fellow Americans. By themselves the Americans only command eleven votes out of 115, but they have influence beyond their numbers.

Fourth, Bráz has not kept a high profile since coming to Rome, and is often not terribly well known to cardinals from other parts of the world. That’s likely an obstacle in a conclave in which, for a variety of reasons, many cardinals are not inclined to roll the dice on an unknown quantity.

That said, this butcher’s son, who carries the reminders of hardship and danger in his own body, could nevertheless be an attractive compromise candidate – an insider who’s also an outsider, a man who listens, and who has a beguiling personal story to tell the world.