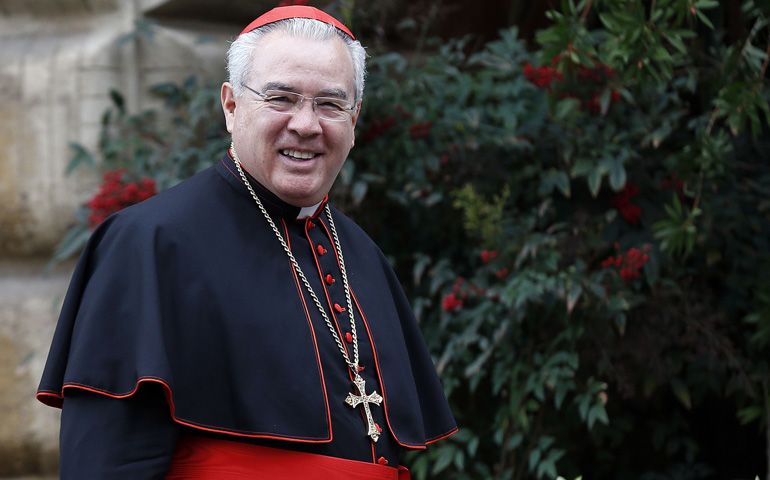 Cardinal Francisco Robles Ortega of Guadalajara, Mexico, smiles as he arrives March 7 for the fourth day of general congregation meetings in the synod hall at the Vatican. (CNS/Reuters/Alessandro Bianchi)
This article appears in the Conclave 2013 feature series. View the full series.

By consensus, if there were a Latin American Ratzinger in 2013, meaning a towering figure who seems as compelling a choice as then-Cardinal Joseph Ratzinger did in 2005, he'd probably be at the top of most handicapping sheets.

In a pre-conclave interview, Italian Cardinal Francesco Coccopalmerio said out loud what many of his brother cardinals may be thinking about where to go shopping for a pope: "It's time to look outside Italy and Europe, in particular considering Latin America."

Surveying the field, however, there's no one slam-dunk Latin American runner, but rather several plausible candidates. The trick is to figure out which one stands the best shot of putting together the magic 77 votes that represent a two-thirds majority.

Facing that math problem, Cardinal Francisco Robles Ortega of Guadalajara, Mexico, might just be a good solution. In recent days, reports in the Spanish-language press have suggested that some other Latin American eminences are floating Robles' name in the pre-conclave discussions.

(The thought may have occurred to him too; in a press conference shortly after Benedict's resignation announcement, he said "it's possible" that a Mexican could be chosen to be pope.)

Just 64, Robles certainly has a lot going for him. He lived at Rome's Pontifical Mexican College from 1976 to 1979 while studying at the Jesuit-run Gregorian University, and he was part of the Mexican delegation to the 1997 Synod for America. He also holds a great calling card in Italian popular Catholicism, which is a strong personal devotion to Padre Pio.

Robles is widely considered less conservative, both theologically and politically, than his fellow Mexican cardinals. He comes from a working-class family in Jalisco, and though he's never been part of the liberation theology movement, he has good relationships with progressive sectors of the Mexican church.

He served from 2003 to 2011 as the Archbishop of Monterrey, a city seen as Mexico's commercial and financial nerve center with the highest per capita income in the country. While there, Robles repeatedly prodded his flock to be sensitive to the poor.

"Ill-gotten and ill-used riches close our heart," Robles said in a typical homily. "We can pass our lives without even realizing the existence of the poor, the needy, the people who require our help."

Robles commands the respect of his brother bishops in Mexico, having been elected in November 12 to take over as president of the episcopal conference. He's also drawn good marks for his candor and lack of defensiveness, among other things offering an apology in a recent homily for "the scandals of those who lead the church."

He also enjoys strong papal support. Benedict named Robles to Guadalajara in 2011, after he had already become a cardinal in Monterey, even though incumbent Cardinal Juan Sandoval Íñiguez was just 78. That created the anomaly of two cardinal-electors in the same diocese, something a tradition-conscious pope like Benedict prefers to avoid, but he was willing to step outside his comfort zone in order to move Robles into the spot.

Robles is also the lone Spanish-speaking Latin American named as a member of the Pontifical Council for Promoting the New Evangelization, a project which is the apple of Benedict XVI's eye. Benedict also tapped Robles to serve as one of three co-presidents of last fall's synod of bishops on the New Evangelization.

Because Latin America until recently had been an almost homogenously Catholic zone, many Latin American prelates don't have much experience in ecumenism or inter-faith dialogue. Robles, however, has led the Mexican bishops' commission on inter-faith relations and served as the moderator of the Latin American and Caribbean Council of Religious Leaders-Religions for Peace, which brings together representatives of various religions.

Over the years, he's shown a willingness to think outside the box in adapting to changing circumstances. During the 1997 Synod of Bishops for America, for instance, Robles Ortega floated the concept of "personal parishes" in Latin America's mega-cities to appeal to people with similar interests. These custom parishes, he suggested, could be run by laity under the supervision of a priest.

Robles has had serious in-the-trenches pastoral experience, having led complex archdioceses in both Monterrey and Guadalajara. He's also displayed some courage, publicly warning both political parties and social organizations that they should guard against infiltration in their ranks by drug dealers. He's also a good prelate for the digital age, with both a Facebook page and a Twitter account.

In the period when cardinals were still giving interviews, they highlighted three basic qualities they're looking for in the next pope:

Looked at the way, it's not hard to see why Robles Ortega might strike some cardinals as more or less just what the doctor ordered.

Robles was born in 1949 in Mascota, a town in Jalisco state, as the third of sixteen children, where the first stirrings of his vocation began as an altar boy. (His father died on Christmas day in 2012.) After ordination to the priesthood in 1976, he was sent to Rome for studies at the Jesuit-run Pontifical Gregorian University.

Here's the case for Robles as pope.

First, he's got a decade of experience in governing large ecclesiastical infrastructures, combined with just enough Roman seasoning that he wouldn't enter the papacy as a complete naïf about the ways of the Eternal City. In a conclave in which governance is a major issue, but in which the Vatican's old guard is also on the defensive, this outsider/insider combination could make Robles very attractive.

Second, Robles profiles as a reconciler in the decades-old division in Latin American Catholicism between progressives, especially the liberation theologians, and conservatives. Not only could he therefore straddle divides within the College of Cardinals, but he could also come off as someone who could heal divisions in the broader church.

Third, because of the close ties between the bishops' conferences in Mexico and the United States, Robles could probably count on significant support from the 11 U.S. cardinals if his candidacy became serious, along with the 19 cardinals from Latin America.

Fourth, many cardinals have identified the New Evangelization as a key priority for the next pope, and Robles' background on that project could be an electoral asset.

Fifth, Robles won good marks for his performance at the synod on New Evangelization last fall, where his co-presidents were Cardinal John Tong Hon of Hong Kong and Cardinal Laurent Monsengwo Pasinya of Kinshasa, Democratic Republic of Congo – two men who might be able to galvanize Asian and African support for Robles.

As always, however, there are also reservations.

First, Robles may be seen as a bit too much of an outsider to be able to truly get control of the Vatican bureaucracy. Studying in Rome as a seminarian is not the same thing as working inside the system, learning to master its ways and means.

Second, while Robles comes off as a smiling and pastoral figure, Mexican observers also say he's maintained a fairly low public profile and isn't seen as particularly charismatic. He might strike some cardinals as a reasonably safe choice, but perhaps not a terribly inspiring one.

Third, the fact that Robles has at least kept lines of communication open with the more progressive sectors of the Mexican church may win him some street credibility, but it also may raise concerns among some cardinals about whether he'd be willing to drawn doctrinal or political lines in the sand if the situation demanded it.

Fourth, there's a sense in which the logic for Robles rests on the part of the world he represents, and the fact that there's no faction or group that has any particular bone to pick with him. While those are positive things, they may not strike some cardinals as quite enough to put someone on the Throne of Peter.

Still, there is a discernible buzz growing around Robles in Rome as we draw nearer to the opening of the conclave on Tuesday, which is perhaps in equal measure a reflection of his own qualities and the lack of a clear frontrunner.

Pope on homosexuals: 'Who am I to judge?'