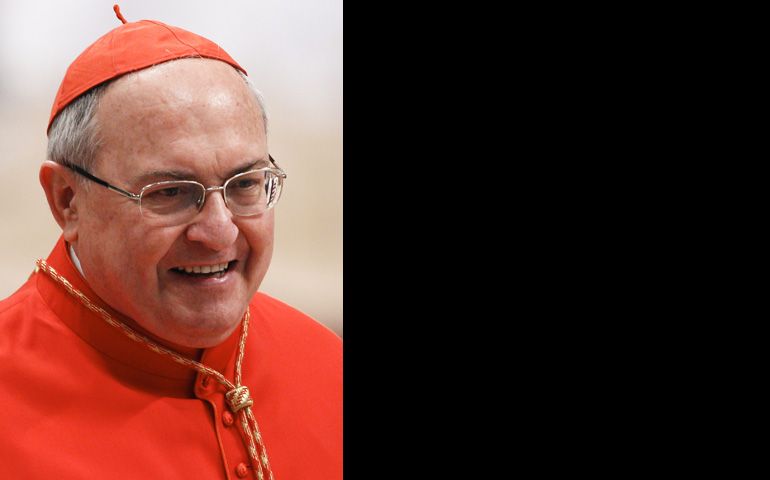 If the process of picking a pope were like a hiring process in any other walk of life, Cardinal Leonardo Sandri’s résumé would probably be a slam-dunk at least to get him past the initial screening and earn him an interview.

We're talking about a 69-year-old, so he's in the right age window, not too old or too young; he's an Argentine by birth who's spent most of his life in Italy, so he brings together the First World and the Third World at the precise moment when Catholicism is seeking a bridge between the two; and he's a veteran Vatican official with a reputation as an adept administrator at a time when many cardinals believe getting the Vatican under control has to be at the top of the next pope's to-do list.

In other words, there's a lot to like about Sandri as a papal candidate.

Currently the prefect of the Congregation for Eastern Churches, Sandri was born in Buenos Aires in 1943 to Italian immigrant parents. He served briefly as a parish priest in Argentina before being sent to Rome for studies in 1970, where he entered the Vatican’s diplomatic service. In addition to stints in Madagascar, Venezuela and Mexico, Sandri also worked in the Vatican embassy to the United States from 1989 to 1991.

(That brief sojourn in America could have important electoral consequences, given that another young priest working in the embassy at the time was a St. Louis native named Timothy Dolan, who is today the cardinal of New York and a good friend. If so inclined, Dolan might be able to deliver several Anglophone votes for Sandri.)

Sandri was later named to the all-important post of "substitute," essentially the Vatican’s chief of staff, under Pope John Paul II and later Benedict XVI from 2000 to 2007. When John Paul died on April 2, 2005, it was Sandri who stepped out into St. Peter’s Square to announce, "Tonight we all feel like orphans."

Sandri speaks English, French, German, Italian and Spanish, and is seen as an affable figure basically free of any ideological agenda.

The case for Sandri as a possible pope is easy to make.

First, heading into this conclave, many cardinals have talked about the desirability of finding a pope with a global vision, who can focus more on the concerns and struggles of the burgeoning Catholic population in the developing world, where two-thirds of the planet’s 1.2 billion Catholic today live. At the same time, they don’t want to elect a stranger to the Vatican and to the dynamics of church leadership in the West -- the media pressure, the legal and political climate, the institutional and financial burdens of the church in places where it has a large infrastructure, and so on.

In that regard, Sandri seems ideally positioned. Because of his roots in Argentina, he would be perceived by outsiders, including the media, as a "Third World pope," yet among insiders he’s seen as one of the Italians. Certainly nobody could accuse Sandri of being a wide-eyed naïf about the realities of church leadership on a big stage.

Second, most cardinals believe the next pope needs to be someone a bit more attuned to the nuts and bolts dynamics of governance. The common diagnosis is that we’ve now had two papacies in a row basically uninterested in the business management dimension of the job: John Paul II was focused on bringing the church’s message to the street and changing the tides of history while Benedict XVI has been a magnificent teacher and cultural critic, but neither man ever took the reins of church government directly into his own hands.

Especially for the last eight years, this diagnosis holds, the church sometimes has paid a steep price for this inattention -- the Williamson affair, the Vatileaks mess, the sometimes tone-deaf response to the child sex abuse scandals, continuing accusations about corruption in Vatican finances, and so on. Many cardinals believe the next pope will need to oversee a thorough reform of the Vatican, in the direction of modernizing its methods and outlook, embracing transparency and accountability, and making sure key personnel are a good fit for the jobs they hold.

On this score, Sandri is about as compelling a candidate as anyone’s likely to find.

He has a stellar reputation from his term as substitute under John Paul II, with most Vatican insiders recalling him as efficient, detail-oriented, and more interested in getting things done than in playing political games. If the cardinals are looking for a "governing pope," in other words, that logic could lead them by a short path to Sandri.

Third, Sandri is an old Vatican hand, yet he's not associated in the minds of most cardinals with the meltdowns under the current Secretary of State, Italian Cardinal Tarcisio Bertone. Sandri was named prefect of the Congregation for Eastern Churches in 2007. At the time it was seen as something of a demotion, though it did clear the way for him to become a cardinal. With the benefit of hindsight, however, the move did him a favor because he was out of the way by the time the Holocaust-denying bishop affair broke in 2009, the Boffo case in 2010, the Vatileaks mess, and other notorious breakdowns.

Fourth, it’s hard to find somebody in church circles who doesn't like Sandri. Granted, few might describe him as "charismatic," but he's almost universally seen as warm, open and possessing a lively sense of humor. A conclave is more akin to the election of a department chair in a university than to the Iowa caucuses because personal relationships are all-important, and Sandri has a lot of friends.

Fifth, as a product of the Vatican diplomatic corps, Sandri is a moderate on most matters both political and theological. As a veteran Vatican official, he passes the smell test for the most conservative figures in the College of Cardinals as someone who would hold the line on church teaching; yet for more centrist cardinals, he comes off as someone who's basically a man of the center. In a conclave in which there’s no longer any provision for going to a simple majority after thirty-plus ballots, compromise becomes even more essential in getting across the two-thirds threshold, and Sandri might be able to draw support from diverse quarters.

Yet there are also at least four prominent draw-backs to Sandri's candidacy.

First, many people in Rome look at Sandri and see a great candidate to be the Secretary of State, but not necessarily the pope. He has a proven capacity to make the trains run on time, but many people believe he has neither the evangelical drive of John Paul II nor the intellectual chops of Benedict XVI. Many cardinals have said they'd like to combine the best qualities of the last two popes, and they may not see that mix in Sandri.

Second, despite being born in Argentina, many cardinals have to remind themselves that he’s not actually an Italian because they're so accustomed to thinking of him that way. They may well see a vote for a Sandri as a vote for continuing the Italian stranglehold on the Vatican, suspecting that he'd rely mostly on his Italian buddies to fill key slots. At a time when some cardinals from other parts of the world are frustrated with what they perceive as a "re-Italianization" of the Vatican under Benedict, with occasionally disastrous results, they might see Sandri as a prescription for continuing the status quo.

Third, Sandri has little pastoral experience, either on the front lines in a parish or heading a diocese. Italian Cardinal Giovanni Lajolo, a fellow Vatican diplomat, has already said out loud he wouldn’t vote for a career bureaucrat because the times demand a "pastor of souls." It’s probable that some other cardinals are thinking the same thing.

Fourth, there's some concern about possible baggage Sandri might carry into the papacy from his previous posts.

For instance, Sandri was in the Secretariat of State under Cardinal Angelo Sodano in the late John Paul years, at a time when Sodano was offering vigorous support for the late Mexican Fr. Marcial Maciel Degollado, founder of the Legionaries of Christ, who was later found guilty of a wide range of sexual abuse and misconduct. When Maciel celebrated the 60th anniversary of his priesthood at Rome's basilica of St. Paul Outside the Walls in 2004, Sandri was dispatched to read aloud a letter of praise from John Paul.

While Sandri was not seen as among Maciel's staunch allies, few cardinals will probably be excited about the prospect of TV packages on the new pope featuring video of him extolling an abuser priest (though admittedly, the words were not his own.)

To take another case, Sandri has been linked in the Italian media to a cause célèbre in 2010 surrounding Angelo Balducci, an Italian public official indicted as part of a corruption probe. Wiretaps also revealed that Balducci, who held the honorific Vatican title of "Gentleman of his Holiness," was involved in a gay prostitution ring and could be heard negotiating for services with a member of one of the Vatican's choirs.

Those wiretaps suggested Sandri and Balducci were on a friendly basis while a rafter of secret Vatican documents published by the magazine Panorama in 2012 included a note suggesting Sandri had been involved in conversations about Balducci's bid to win procurement contracts worth $400 million for a G8 summit in 2009.

No one has accused Sandri of any wrongdoing, but his links with Balducci may come in for a closer look during the pre-conclave period.

More generally, holding senior positions in the Secretariat of State by necessity means being involved in the Italian financial and political scene, and some cardinals may wonder if there are other potential skeletons in the closet -- or, perhaps, even innocent situations that would nevertheless be tough to explain.

By consensus, there is no clear front-runner for the papacy. Inevitably, cardinals may have to settle for less than their ideal of what the next pope ought to bring to the job, coming as close as they can based on who's actually available. When they look at Sandri, they'll probably see a great deal to like, and at least some things to give them pause -- which, right now, makes the Argentine-cum-Italian basically no different than many other possibilities.

Saying 'no' to Christ

Cheer the D'Antonios: 60 years together