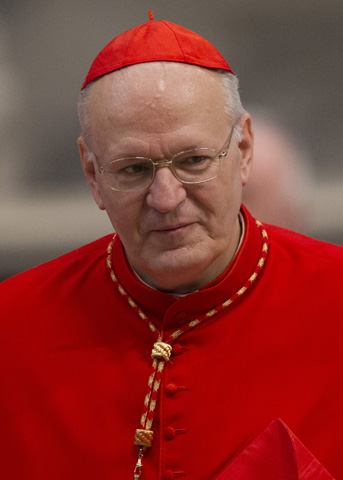 There's a lot of chatter these days about a "Third World pope," and it's a realistic possibility. Politically speaking, however, it overlooks one bit of arithmetic: 61 of the 116 cardinals who will file into the Sistine Chapel still hail from Europe, so discounting candidates from the Old Continent means ruling out half the talent pool a priori.

Moreover, there are Europeans and then there are Europeans. Electing an Italian might strike some cardinals as heading back to the future, but choosing a pope from a long-neglected corner of the continent might seem almost as bold to them as picking someone from, say, Latin America.

If so, many church insiders believe that Cardinal Péter Erdõ of Budapest, Hungary, could get a very serious look.

A canon lawyer by training, Erdõ has been on the ecclesiastical fast track his entire career. In 2001, while he was still an auxiliary bishop and before he'd even turned 50, he was elected to his first term as President of the Council of Episcopal Conferences of Europe. He was reelected to a second five-year term in 2006.

In 2002, he was named the Archbishop of Hungary's premier see at the tender age of 50, and made a cardinal a year later. At 52, he was the youngest cardinal to participate in the conclave that elected Benedict XVI in 2005. Eight years later, there are still only five cardinal electors younger than Erdõ, who's now 60.

Yet as Indiana Jones once put it, "It's not the age, doll, it's the mileage." Despite his relative youth, few would suggest Erdõ lacks the seasoning to lead.

He also represents a persecuted church during the Soviet era, symbolized in the figure of Cardinal József Mindszenty, who was tortured and sentenced to life in prison by a Communist kangaroo court, took refuge in the U.S. embassy in Budapest for 15 years, and died in exile in Vienna in 1975. Earlier this year, Erdõ convinced the Hungarian government to formally drop the case against his predecessor originally filed in 1949.

Given his location in Hungary, where East meets West in Europe, it's no surprise that Erdõ is a leader in Catholic relations with the Orthodox churches, seen by many cardinals as a high ecumenical priority. He's reached out to Jewish leaders too, and was recently blasted by far-right forces in Hungary for having lunch at a well-known Jewish restaurant in Budapest.

Erdõ is certainly a person of trust in Vatican circles. In 2011, he was appointed as a member of the council of cardinals and bishops overseeing the all-important Second Section of the Secretariat of State, responsible for the Vatican's diplomatic relations. In the same year, he was dispatched by the Vatican to lead an investigation of the Pontifical Catholic University in Peru, charged with defiance of church teaching and discipline.

On most matters Erdõ is seen as a solid conservative, but also as a pastoral figure with a practical grasp of what works at the retail level. During last fall's Synod of Bishops on the New Evangelization, for instance, many prelates were intrigued by Erdõ's description of "city missions" he's encouraged in Budapest, in which laity visit all the Catholic homes in a given parish to invite them back to church.

Erdõ could also draw surprising support from the developing world. As president of the European bishops he's forged strong ties with the African bishops, staging biannual meetings that alternate between a European venue and one in Africa. As a result, most of the African cardinals know Erdõ and like him.

As president of the European bishops, Erdõ coordinates support for the church across the developing world, earning gratitude from a number of cardinals in those regions.

Americans may be intrigued to know that Erdõ also has on-the-ground experience of the U.S., having won research grants in 1995 and 1996 to study at the University of California in Berkeley.

The case for Erdõ as a possible pope boils down to three key points.

First up, it's the math. His two terms as president of the European bishops suggest he's got solid support from that bloc, and his good ties with the Africans suggest that if his candidacy were to take off, they might come on board. It will take 77 votes to get to a two-thirds majority in this conclave, and the Europeans and Africans together represent 72.

Erdõ could probably count on the support of a few Latin Americans, including Cardinal Juan Luis Cipriani of Peru, whose position Erdõ basically backed in the standoff over the university.

In other words, you start running the numbers, and it's not tough to envision a winning coalition.

Second, Erdõ is seen as a capable administrator, someone tough enough to get things done. That's likely a sine qua non in the current climate within the College of Cardinals, many of whom are determined that the next pope must get the Vatican's internal bureaucracy under control.

Third, Erdõ has good conservative credentials, among other things gaining an honorary doctorate at the Opus Dei-run University of Navarra in 2011. Yet he also profiles as a broker of compromise and consensus, with the capacity to hold a highly disparate body of European bishops together.

He also embraces many of the social justice concerns that tend to loom large for more centrist cardinals. In a 2007 speech to the bishops of Latin America meeting in Brazil, Erdõ voiced solidarity with their concerns, including increasing poverty and environmental destruction.

The knocks on Erdõ can also be laid out in three points.

First of all, he can exhibit a pessimistic streak about the relationship between the church and the broader culture. At the synod last fall, for example, he blasted the media.

"Many of the mass media broadcast a presentation of the Christian faith and history that is full of lies, misinforming the public as to the content of our faith as well as to what makes up the reality of the church," he said.

While many cardinals would probably agree with that, some may wonder if it's the right tonality for a pope they want to reach out to the wider world.

Second, while Erdõ is seen as an effective behind-the-scenes figure, he's not exactly the most dynamic personality in public settings. Some cardinals may wonder if he has the stage presence to be pope.

Third, his youth may cause some cardinals to wonder if a vote for Erdõ would mean an option for an overly lengthy pontificate. The last two popes were well into their eighties when their pontificates ended, meaning "Papa Erdõ" could conceivably rule for twenty years or more.

If he can get past those barriers, however, Erdõ could seem an attractive possibility, especially in a conclave in which there doesn't appear to be any clear front-runner.

If a candidate from outside the West doesn't have traction, the 2013 conclave could still produce a slightly exotic choice, potentially giving the church a "Goulash Pope."